After a lung-cancer diagnosis, Yariv Kafri resolved to keep running—and inspire others to do the same 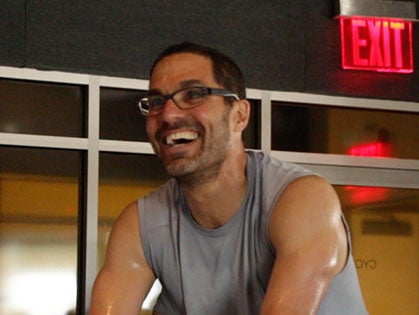 Kafri at a spinning class organized by his nonprofit, Supportersize, earlier this year. Photo courtesy of Yariv Kafri.

This summer, Yariv Kafri will line up next to hundreds of other racers at the 2015 TransRockies Run, a 3-day, 59-mile stage race from Buena Vista to Beaver Creek in Colorado. But for Kafri, the race is about much more than crossing the finish line. The 49-year old native of Long Island, New York, has been living with lung cancer for a year and a half.

In September 2013, Kafri was surfing at Gilgo Beach, on the south shore of Long Island, when he fell and hit his head. The floaters in his eye wouldn’t go away, so he went to see a doctor. A CT scan revealed that what he thought was a concussion was actually a golf ball-sized tumor sitting behind his left ear. The cancer had originated in his lungs, before metastasizing to the brain.

Kafri, now the CEO of a technology company, was an intelligence officer in the Israeli army for three years, but says nothing could have prepared him for his diagnosis. “I have two kids and a wife. I’m as healthy as I can get,” he adds. “[Nothing] gets you ready for that—not being in wars, not being in all sorts of extreme circumstances.”

Three days later, he had surgery to remove the tumor from his brain, followed by four months of chemotherapy. “Only four months, but it devastated 30 years of fitness,” he explains.

Kafri had played professional volleyball for Israel in his early 20s, and later competed in triathlons, including several Half Ironmans. The day before his diagnosis, he played a 90-minute soccer match—a weekly fixture of his life in New York. For Kafri, a life without physical activity simply wasn’t life at all, cancer or no. Ten days after brain surgery, he went out for a 30-mile bike ride with friends; when the chemo started he bought a set of Insanity workout tapes.

Now he is eager to prove that cancer is not a be-all-end-all for physical fitness, and that outdoor exercise may actually be invaluable to cancer patients and their families. He founded a non-profit, Supportersize, which promotes exercise and outdoor activity for those living with cancer, and will run TransRockies to raise awareness for the organization.

Kafri is quick to mention that cancer has not been the biggest impediment to his training, but rather a calf injury that laid him up for three months. When asked if he will need a doctor during the race, he smiles and says, “No more than any other runner. I’ll be more worried about altitude, muscle injury and dehydration than I will be about the cancer.”

Trail Runner sat down with Kafri to talk about Supportersize, the challenges of training for the TransRockies run and how trail running has played a vital role in his fight against cancer.

1. Amidst all this physical pain, what has motivated you to train?

Sports were part of my identity. I knew I had to find a program that would bring me back to fitness. The doctors were shocked how fast my body recovered between rounds of chemo, and it’s truly because of sports.  The only difference between me and other people was that I was working out. That’s when I knew I was on to something—that athletics could be beneficial to my treatment plan.

I want to share that with everyone else who is living with cancer. I strongly feel that my role in this world is not finished yet. I have a lovely family and I can give more to people around me. I am not ready to move on.

2. How did you found Supportersize?

After I had my surgery and started exercising again, I found that I was really inspiring people—doctors, neighbors, friends—and realized it was a calling, something that I could do for other people.

There are so many wonderful organizations that raise money for cancer research, but I wanted to do something more immediate. With cancer, you live in fear: What’s the next scan going to look like? Is the cancer going to come back? Exercising is a break from all those scary thoughts. You are in the zone, not thinking about cancer. My mission with Supportersize is to take care of people right now, to give them the wonderful feeling of not feeling like patients. We do as many activities outdoors as possible—yoga, trail runs, trail walks, stand-up paddle boarding—and we do indoor events as well—spinning, indo boarding and, soon, a strength-training class. The organization is small now—just here on Long Island—but I think it can be successful everywhere in the world, because cancer is everywhere.

3. How has running factored in to your recovery?

When I was diagnosed, I was drawn to two books by doctors who had been diagnosed with cancer [Getting Well Again by O. Carl Simonton and AntiCancer by David Servan-Schreiber]. Doctors are notoriously skeptical about non-medical treatments for cancer [like meditation or incorporating more natural foods into one’s diet]. There’s no research, so they can’t prove it. But these two doctors had experienced the effect that their mind had on their recovery and on their stress levels, and I became a big believer in that.

The recovery process connects back, ultimately, to how you deal with the stress. That is, for me, the role that running plays in my recovery. For the hour or two that I am exercising, I’m really there. I am not thinking about cancer, or what will happen next month or next year.

4. What made you decide to run the TransRockies stage race?

I heard about it from a friend who had done it the year before, and I thought it would be a great challenge and a great way to build awareness [for Supportersize]. What we do at Supportersize is that we show by example. We are all people who have been touched by cancer. We are not just more doctors telling you to exercise. We preach it and we do it.

5. Why trail running, as opposed to any other sport?

I had done a little bit of trail running before I was diagnosed with cancer, but since the diagnosis I run only on trails, six to seven days a week. Even on Long Island, you can get lost in the trees, and it’s just a wonderful feeling of being alive. When you run on trails, the pace is more relaxed and the scenery is better. I feel like all those years I was running on pavement, I was missing out.

6. Are your doctors supportive of your decision to run TransRockies?

There’s a lot of exciting research happening today with sports and cancer. Doctors believe that there is a connection between physical activity and a quicker recovery from chemotherapy. So they told me to go ahead and do whatever I felt I could do, within reason.

But then they realized that what I wanted was maybe a little too extreme. For example, six months after the brain surgery, I went surfing again and the board hit my head and I wound up needing 50 stitches above my right eye. I went in to see the my oncologist and she said, “We are trying hard to keep you alive. Do me a favor and don’t try to kill yourself!”

They support my activity, but they are not extremely happy about the race.  Still, they understand that my well-being has a lot to do with how I feel about myself. It’s psychological more than physical.

7. Do you have a personal goal for the race, outside of raising awareness for Supportersize?

To be able to walk after the race! Really just to finish, and to go through the experience. There is supposed to be a great vibe. And I want to be healthy after the race, to not be collapsed and in a wheelchair. That’s all I can aspire to, I think.

8. Has living with cancer affected your relationship to trail running and the outdoors?

Going outdoors reminds me why I want to keep living. To be outside, out of the hospital, out of that room, you just feel alive. This winter I went running with snowshoes on the same trail I run on every week, and it looked so different covered in snow. That sense of wonder that I get when I am outside and I am running, that is what I am fighting for.