This past Monday, shortly before 5 p.m., the 31-year-old Italian trail runner and ski mountaineering racer Martina Valmassoi skinned one final time up the 725 meters to the summit of 1,534-meter Monte Agudo in Italy’s Dolomites region. It was her 25th time on the summit in just under 24 hours, and when she reached the top of the Auronzo di Cadore ski area, friends and supporters sprayed her with two bottles of champagne. She had just climbed, on skis, a difficult-to-fathom 17,645 meters (57,890 feet), besting by 868 meters a women’s 24-hour uphill ski record set just eight days earlier by Colorado athlete Rea Kolbl.

Valmassoi lives in Pozzale di Cadore, Italy, about a 25-minute drive from the ski area where she ticked off her laps.  When she’s not skiing around her native Dolomites, Valmassoi is a Community Manager and content creator for Salomon, and co-hosts the coverage of Salomon’s Golden Trail race series. 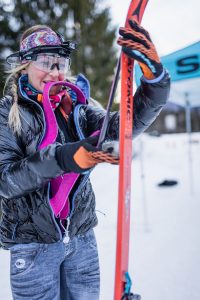 In Italy, and around Europe, Valmassoi is well known for her ski mountaineering prowess. Sponsored by Scarpa, she has been on the Italian national team for 10 years, and with French racer Laëtitia Roux holds the record for the fastest time in Italy’s legendary Sella Ronda ski-mountaineering race. She has placed second at France’s Pierra Menta ski-mountaineering race, and has stood on the podium of that internationally-acclaimed multi-day event three times.

I said, “Maybe I should try something crazy, like skiing for 24 hours just to see what happens!”  My friend said, “You’re crazy!” And we just kept skiing. That was the beginning of January. The idea never went away.  Shortly after that, I decided to go for it.

Trail Runner magazine’s Chamonix, France, correspondent, Doug Mayer, caught up with Valmassoi while she was resting—which seems like a relative term for her. She had just completed interviews with German magazines, Italian newspapers, Strava, Mountain Planet, and the French daily sports newspaper L’Équipe—all during a cross-country drive to Trentino, Italy, where she was working as a freelance photographer at the Campiglio Ski Mountaineering World Cup race. During the interview only a solitary yawn hinted at the whirlwind week that Valassoi had just endured.

Valmassoi: I was skiing in the mountains with a friend of mine, and it was my 50th consecutive day on skis. I thought, “Wow, I’ve been skiing for 50 days!” That had never happened before. I said, “Maybe I should try something crazy, like skiing for 24 hours just to see what happens!”  My friend said, “You’re crazy!” And we just kept skiing. That was the beginning of January. The idea never went away.  Shortly after that, I decided to go for it. 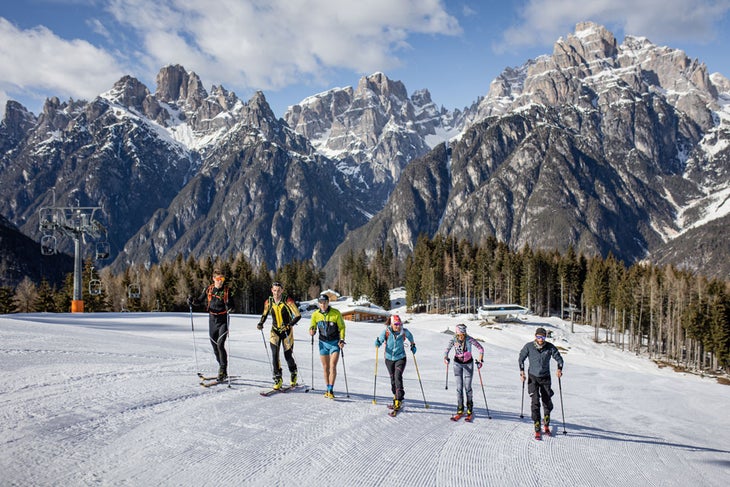 What was the reaction when you told friends and family about your plans?

It was the same from everyone: “What the &*$^@?! What’s happening to you?! Why this idea?!”  It was pretty funny. My sister took a while to understand it and my mom started to worry that I would not make it.

How did you approach training for the event?

Honestly, nothing much changed. I wanted to do it my way and just ski as much as possible. I wanted to keep on exploring where I live, to get the most out of the winter. Of course, I tried to get in a lot of hours on skis. Even when the conditions were bad and the weather not good, the goal motivated me to get out.

But, you had to do some time at the ski area, right?

Yes. I didn’t want to train that much on the slopes, but I knew I had to test myself there. I decided to do a test run a month before the event. I did a 5,000-meter day to see if I had the right slope and see how I did. It felt good and it gave me an idea of the pace I would need to set a record.

In the last month, I did a block of two weeks of training. I did 31,000 meters in those two weeks to create a good base. After that, I would train three times a week on the slopes. During that time, I organized the event and rested. 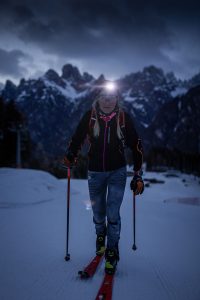 You picked the ski area in your local valley, which seems really special to you. In an Instagram post after your record, you wrote, “Cadore, the best place in the world with its mountains and views. It gave me superpowers today.” How did you decide on that location?

It was close to home, and steep with a good elevation gain. But, mainly, I picked it for the view! I have seen that view so many times, but every time I go up, I still stop and look. At the summit, I can turn around and see all the places I go on skis, and where I trail run in the summer.

It’s incredible how much energy you can take from your surroundings and the mountains around your home. I have so many memories there. It all comes to my mind when I am up there.

Some resorts offered me money, but I don’t know if I could have done this in another location. For me it wasn’t so much about the record, as it was about doing it at home with friends. One of my main goals was to not be alone in this project, to involve family and friends. That made it really special.

Can you tell us about the logistics?

I decided to have the aid station at the top, because the bottom is in the shade and cold. I wanted my friends to have fun, and at the top there is the view and the hut, the Monte Agudo Refugio. So, my friends could stay warm in the refugio. The caretaker was super cool. He helped a lot.

Except for the first six or seven hours, I almost always had someone skiing up with me. Those times, I could go without my pack. Sometimes, I would listen to music on my phone. I would eat at the top or on the way down. On the climb up, I would bring a 250ml flask. 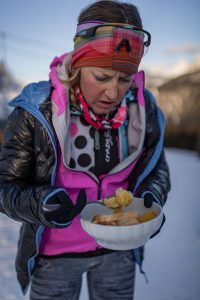 It went great! I would never have imagined that it would go so well. You always wish for the best but you also have to expect the worst.

I had a plan, of course, and I wanted to keep up a certain pace—a lap an hour. I knew I could do that for the first 12 hours, but after that … well, I had no idea. That was the scary part.

During the night, I kept the pace I wanted. I did have some problems. It was cold and windy, and I got cold. I kept my jacket on and decided I would rather sweat. I had to take a lot of bathroom breaks. I started to feel sick. I was worried. But I stayed positive and focussed.

From 10 p.m. to 6 a.m. I had a friend of mine, Michele Da Rin, who had his own personal challenge to ski through the night. He did 5,000 meters with me. Cheering him on gave me some extra motivation. I realized I was doing OK, if I was able to push him along, too!

You know, I felt pretty good all the time. I had some moments, of course. Sometimes it was not exactly hard, but it took more concentration and focus to stay on the pace.

What was the worst thing that happened?

It was probably prior to the event. Because of the pandemic, I had to plan everything really carefully. That was stressful.

Until right up to the start, I wasn’t sure we could do it, because of the situation with Covid here in Italy. I let friends know of my plans, of course, but otherwise I kept it quiet.

To plan it, I had to give names of people who would be allowed there for support. I had to ask the Mayor if the hut at the top could stay open for us. He gave permission. That was really cool of him. 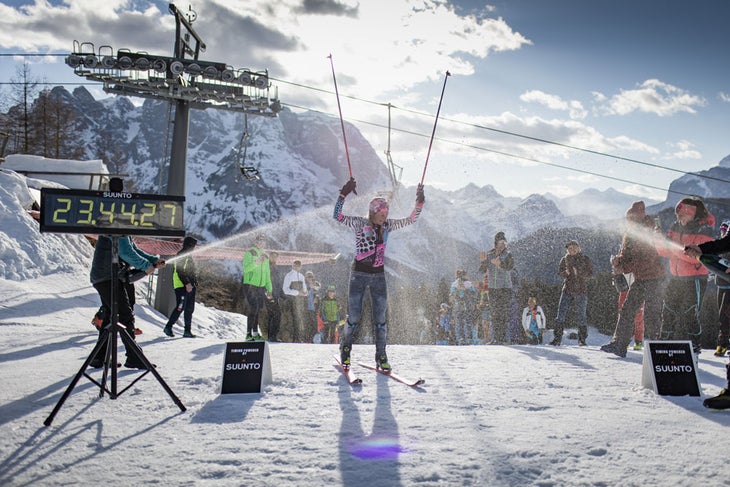 How did you fuel for a full 24 hours?

I prepared a food plan, though honestly it was kind of random. I tried to get real food every two laps, and I always tried to eat normal food between those bigger meals.

I prepared rice, polenta, chocolate and coconut bites, dates, dried fruit, toast, soup, potatoes and Spring gels. I had electrolytes to drink, plus ginger tea with sugar and lemon. Of course, by the end of it I was drinking a lot of Coke!

I’ve done a lot of interviews since I finished. My parents and friends were completely blown away. They had never seen an attempt like this.

I had a timekeeper who started out being kind of quiet, but later on he really got into it and was cheering me on. He was super stoked. For me, it gave me so much energy to see the faces of family and friends. Doing something so big with your friends and family makes it extra special.

Where does ski mo fit in with your trail running?

I’m more of a ski-mo athlete than I am a trail runner. Trail running is still kind of new for me. I started running as a way to train for ski mountaineering.

My trail running has improved, and I have moved into the longer races—I think because I like to train more slowly and enjoy the view! I think my best result was 2019 in the [Chamonix, France] Mont Blanc 90K. I got second place. I was really happy. That was a big goal and I surprised myself by finishing an hour earlier than I expected. I’ve had some other good results. In Kima, Italy, I was fifth in a really stacked field, after not much training. I want to do that race again. Tromso, Norway, I have finished third and fifth.

I need to process what just happened—to enjoy it. And I am still not sure how my body will react! Right now, my legs are really tired.

Soon, the trail-running season will start. Right now though, I want to rest. I don’t always have to do something to be satisfied. After some rest, I will train for a cool summer adventure.

This was a big thing. It was, by far, the result I am most proud of in my athletic career. Normally I don’t like to say this kind of thing, but I think I did a good job. I managed it well.

It took a lot out of me, but it also gave me more.

For someone who’s reading this, and wants to try out ski mountaineering, what do you suggest?

Ski mo is really just backcountry skiing with skinny skis. If you like the backcountry, like to be in the mountains and want to train with plenty of vertical, it’s great. Exploring with skis is something everyone should try. It gives you so much freedom.

Of course, you always need to be aware that the backcountry environment can be dangerous—more dangerous than in summer. There’s a lot to check.  You have to be concerned about things like avalanches. And I don’t recommend starting by skiing for 24 hours!

What’s important is learning skills. For example, the downhill is harder than the uphill. For me, though, ski mo is super fun. If you love trail running, you will probably like ski mo.

The Trail Runner’s Guide To Skiing