Vaughan believes his unsupported traverse, meaning no access to a crew or cached supplies, to be the first of its kind across Washington state 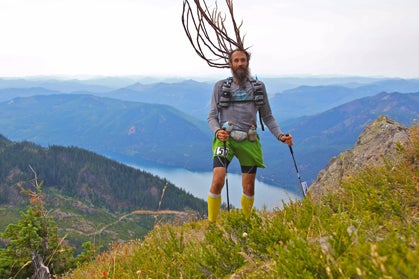 Call it an FKT: first-known time.

Ras Jason Vaughan, better known as UltraPedestrian Ras, 43, of Seattle, completed a traverse of the entire state of Washington on foot last week, arriving at the Oregon-Washington border at 8:31 p.m. Tuesday, August 19.

Ras and his trademark dreadlocks completed the journey, which took him over 500 miles from the Canadian border to Bridge of the Gods at the Oregon state line via the Pacific Crest Trail (PCT), in 13 days 14 hours 58 minutes. Two days prior to starting, on August 4, he hiked 30 miles north to his starting point from the Hart’s Pass Trailhead in northern Washington’s Pasaytan Wilderness, took a rest day, then began his journey south on August 6 at 5:33 a.m.

He was completely unsupported, meaning he had no assistance from a crew (as in supported attempts) and did not cache food and supplies for himself along the trail ahead of time (as in self-supported attempts). Adhering to strict self-imposed rules, he also did not forage for wild food or accept help from others on the trail, and he carried out all of his own trash until the end of his journey.

To accommodate his approach, he carried 29 pounds of dehydrated food, which he simply soaked in a container to prepare. He says a stove would have added too much weight. He carried no shelter or sleeping bag, opting instead to sleep on an inflatable mattress with a down jacket, pants and slippers.

It is believed to be the first completely unsupported crossing of the state of Washington on foot.

We caught up with Ras to ask him about what inspired him to make the crossing, why he did it unsupported and how he fared against the elements.

First of all, 29 pounds of food—how much trash did you have in your pack at the end?

I had a medium-sized peanut butter jar crammed full of wrappers, Ziploc bags and dead batteries. I would guess there were three and a half pounds of trash, mostly because of all the batteries. 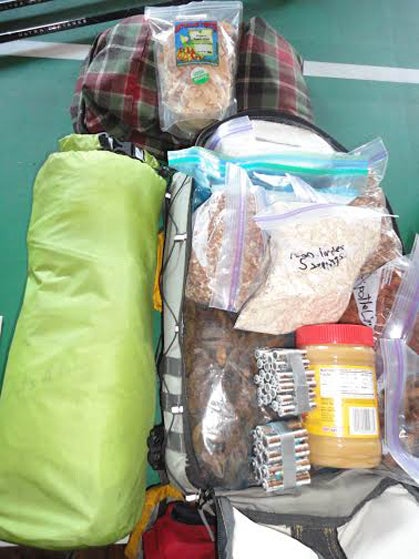 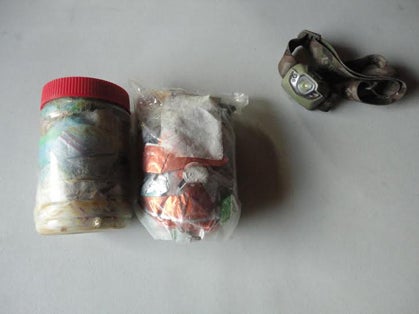 … and after. Photos by Ras Jason Vaughan

What kind of food was it, and how did you prepare it?

Most of it was homemade food that I cooked then dehydrated. A small amount was ready to go. I had a jar of peanut butter and a box of granola bars I crumbled up and stirred into it. I ate that for breakfast most days, until I ran out with three days to go.

At home, I made white jasmine rice, tempeh and soy strips. The soy strips were plain but I seasoned them with green curry, Jamaican jerk, lemon pepper, Sriracha and chipotle lime. Dehydrating everything saved a ton of weight and time on the trail.

When I soaked it I used a lot of water so it actually came out like a stew. It’s the best trail food I’ve ever had. 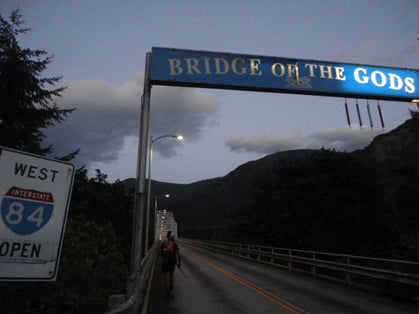 Ras completing his journey at the Bridge of the Gods at the Oregon border. Photo by Kathy Vaughan

Why did you make the trip unsupported?

It suits my temperament and skill set. I’m not fast, so trying to do something just as quickly as possible isn’t really logical to me, because there are more talented people who will put up a faster time with the same amount of support. Doing it unsupported presented a challenge on the grandest scale. I’m nerdy that way. I like anticipating all the things that can go wrong and having a plan in place for each complication.

You didn’t even forage for berries or other food on the trail. Would that have made it a self-supported attempt? Why did you impose this rule on yourself?

According to the standards on Peter Bakwin’s fastest-known times website [widely regarded as the authoritative source for records and rules on speed records], foraging is considered a self-supported effort instead of an unsupported effort. It seems silly if you grab a handful of huckleberries, that that would somehow increase how much support you have, but there are examples where a group of guys went for months unsupported, but they were hunting and that sort of thing.

Plus, I was running a huge calorie deficit every day, and in 30 minutes I might spend looking for berries, I could have covered a mile and a half, for not that many calories in return.

Were you also unsupported for the 30-mile hike and rest day that preceded the crossing?

Yeah, I was unsupported for my approach hike too. That was funny because I made a completely amateurish mistake—we haven’t been to that trailhead before and when my wife was driving me there I had her take a wrong turn, so I ended up adding four extra miles. Nothing like having four extra miles at the beginning where my pack was the heaviest. With the approach I ended up going 541 miles in 15 days.

How did you keep warm at night without a tent or sleeping bag?

I did have a number of pretty comfortable camps, and one or two at higher elevations, where I would find a downed log or something for shelter that made it comfortable. But I had others where I was higher than I wanted, where there was a breeze at ground level all night long, and I would wake up from the cold. So I would flex my whole body and wiggle my legs until it was warm enough to fall back asleep for five or 10 minutes until I woke up again. At some bivies, it seemed like I was just wiggling my legs all night long.

Did you carry rain gear? How was the weather?

I had two pieces of rain gear: a waterproof Gore-Tex shell and Gore-Tex socks. My plan was based upon not having to deal with much rain. If I had had three days of rain in a row, I would have just given it a go another time.

At one point a lightning storm came up. It was just a smattering of rain but there was lightning striking a nearby peak and thunder echoing all around. Dark was coming and and the further I descended the harder it rained. I was soaked when I got to the trailhead after midnight. There was a park service bathroom there and I went right in it. One odd fringe benefit of those pit toilets is that the decomposition creates heat. And, of course, they’re waterproof.

Is the Washington section of the PCT technical, and did it have a lot of vertical gain and loss?

It offers quite a variety of trail surfaces and there’s a lot of up and down. The Washington section is definitely considered one of the harder sections of the PCT. There was everything from brutally loose technical volcanic rock to super cruise-y pine-needle trail, and everything in between. Some of it is incredibly exposed.

You gained 15 pounds ahead of the trip to have fuel reserves. How did you do that, and did you lose it all during the run?

I normally weigh between 180 and 185 pounds, and I bumped up to 200 pounds before the trip. I eat a vegan, high-fat diet—lot of nut butters, coconut oil, avocado—to keep my body in a state where it’s fueling more off fats than off carbs. By basically adding a lot of sugar and wheat, and liquid calories—those things would add fat as stored fuel. It’s a dense fuel source—a pound of fat is about 3,500 calories.

I was planning on needing 7,000 to 8,000 calories a day, figuring about 3,000 would come from food and the other 5,000 would come from fat stores. I felt good for most of it the trek, but I could tell my fat stores were used the last few days, as I was having dizzy spells and my legs felt rubbery. I originally hoped to do it in 10 days and had to stretch my food. I ran out of my dehydrated food with 50 miles to go and all I had left was a chocolate bar from my wife. I saved it for the end because chocolate can change your brain chemistry and I knew I would need a mental boost. I figured out the math, and it was about four calories an hour.

Immediately after I finished I ate some cookies and a big sandwich and soda, then weighed myself at the motel, and I weighed 174. So it seems that over the course of just under 16 days, my body metabolized 26 pounds of stored fat.

For the first 11 days you never covered over 42 miles in a single day, but you covered the last 97 in just over a day. What made you do that?

I moved through the night in the last two days because my pack was light, it wasn’t really technical and my food stores were getting low. I knew I could do it because I’ve run numerous 100-mile races.

I was also really motivated to keep it to 13 days. I really didn’t want to sleep another night and have it be over 14 days. I feel good about it because it’s solidly within the 13-day mark.

Last year, you completed an unsupported sextuple crossing of the Grand Canyon. So I guess everyone is wondering: what is your next destination for an unsupported crossing?

I don’t have an answer for you! A lot of the time I would have something in mind but this was such a big project and I was so focused on it for a year. To be honest, I was less convinced of my ability to complete this journey than anything I’ve ever done. At this point I’m mentally regrouping and starting from scratch and looking for ideas.

My immediate goals are organized races, which are a little foreign to me. I’m running the first Tahoe 200 in two weeks and am putting in for the Barkley Marathons this year, so hopefully I can get in and go bag a DNF! That sort of race is exactly the kind of puzzle my mind likes to chew on.