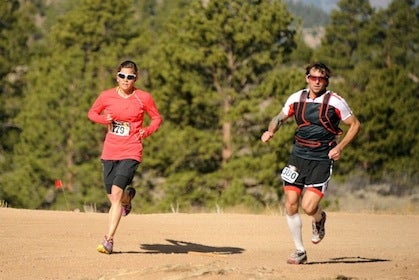 “I think having a lover as a training partner would be tricky,” says Ashley Arnold, the 2013 Leadville Trail 100 champion and a friend of the couple. “You’d run the risk of engaging in way too much training-centered conversation.”

But Kremer and Thomson seem to make it work splendidly—training together has helped them reach the top tiers of the trail-running world.

This year Kremer crushed the Pikes Peak Marathon, finishing 12th overall with one of the fastest women’s time ever, 4:17:13.  She also won the Limone Extreme Skyrace and nabbed the 2013 Sky Series Championship (a series of endurance mountain races with a minimum altitude of 6,561 feet) title as well as the USA Trail Series Championship. Meanwhile, Thomson won the Leadville Trail Marathon in 3:37:07 and set the course record for the Collegiate Peaks 50-mile race in Buena Vista with a time of 6:53:28. In the winter, they take a break from running and participate in ski mountaineering races, which they tend to win as well. The duo races under the team name Team Karli Racing, a title Thomson created in memory of his friend Karl Pfister.

They grew up far apart, but were united by their love for Colorado’s Rocky Mountains.

Kremer, 29, was born in Germany, but her family moved to the United States, and she attended Darien High School in Connecticut. When she relocated to the Rocky Mountains to attend Colorado College, Kremer discovered a love for the mountains—and for running. As a senior, she finished her first marathon, then moved to Crested Butte, Colorado, in 2006 to teach elementary school.

That year, she ran her first trail race with a friend—and finished dead last. But she was hungry for more. She kept running trails, taking to the mountains in her free time. Even when she traveled to Italy in 2012 to teach at the International School of Trieste, Kremer spent her weekends running in the mountains of Switzerland or France.

Thomson, 34, was raised in Ludlow, Vermont, where his parents had him skiing the slopes of Okemo Mountain as a toddler. When he was 21, Thomson moved to Colorado and lived on the Front Range to work at a brewery. But the city life wore on him, and he relocated to Crested Butte in 2007 to immerse himself in the Colorado backcountry. “I needed the spirit of the mountains,” he says of the move.

In 2007, the two crossed paths at a New Year’s Eve party in Crested Butte. After spending their first date on skis, they soon found each other to be great training partners.

“They constantly push each other,” says Kremer’s father, Juergen Kremer. “[Since they met], they’ve become more competitive, but also more appreciative for what they’ve accomplished.”

Training and living together have changed some personality quirks as well. “While Marshall may have used to go for a Budweiser, he now prefers chia seeds,” jokes Erica Mueller, a childhood friend of Thomson’s.

Read on for a Q&A with Thomson and Kremer to find out more about what it takes to be in a powerhouse relationship. 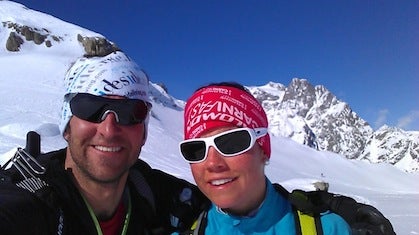 Thomson and Kremer on the slopes.

So you weren’t always runners?
Stevie Kremer: In high school I ran indoor track, just to do something in the winter. Then in college, my friend and I ran a couple times a week avoid gaining the “college 15” … which didn’t totally work. But I only found out how much I loved running trails when I moved to Crested Butte.

J. Marshall Thomson: I basically started running four or five years ago to stay in shape for skiing and spend time with Stevie.

Can you tell us a bit about Karli Racing, the team you founded?
SK: Marshall actually started Karli Racing as a tribute to his best friend, Karl, who unexpectedly passed away in 2010. Karl loved the outdoors and Marshall wanted to create something in his memory.

JMT: “Karli” (Karl) Pfister was one of my best friends. He inspired me to just have fun and enjoy life every day, and I wanted to honor that gift. Since lots of events ask if you’re sponsored or part of a team, I decided that Karli Racing would be my “team.”

What are your training schedules like?
SK: I get up early to run before teaching while Marshall makes breakfast. Marshall works nights at Maxwell’s Steak House in Crested Butte, so he runs or skis during the day. Sometimes our schedules line up and we can get out together, which is a serious workout for me to keep up with him! In the winter we ski as much as we can.

Neither of us has a “training routine” per se. We just really love just being outside.

Is it difficult to fit your careers into your athletic lives?
SK: I think it’s important to have a focus completely outside of athletics. In my case, it’s my stellar second-grade class at Crested Butte Community School. If I have a bad race, I always have 22 little whipper snappers waiting for me at school!

JMT: Stevie is much better than I am at this. It just comes down to scheduling and training at less-than-ideal times and conditions. Our employers have been really understanding.

How did the two of you negotiate Stevie’s year in Italy? Was it hard to stay motivated without a constant training partner?
SK: Marshall has known that I’ve wanted to live and work abroad. I tried to convince him to join me, but I knew he had his life to live in Crested Butte. I definitely missed our daily skis together and traveling for races, but knew it was only a year. Luckily were able to meet up in various places throughout the winter to ski and spend time together.

JMT: It was hard, especially in the winter. I really missed my 20-below morning skis with her.

What’s your favorite thing to do together, off-trail?
SK: If it’s not enjoying the after-party of a race together; it’s probably sitting on the couch in front of a fire, drinking wine or a beer while Marshall cooks.

JMT: Snuggle on the couch in front of a fire watching Law and Order: SVU or lift skiing at a resort.

You put out an amazing co-ed effort at the Elk Mountains Grand Traverse (a 40-mile backcountry ski race between Crested Butte and Aspen, Colorado) in 2011 as the first-place co-ed team and second-place team overall. Are there more duo races on your schedule?
SK: That race was really hard. Let’s just say I was pretty excited to have arrived in Aspen in one piece! I really hope Marshall wants to partner up with me again this year.

JMT: I hope to race the Grand Traverse again with Stevie. She’s stronger than anyone I know, male or female  I honestly think that we could win it together. We’re also racing a multisport relay called the RockyMan in Brazil this year.

What are your goals for 2014?
SK: It would be awesome to do well in the Grand Traverse if we do it together this year. And we’d both love to have a fun and successful Colorado Mountain Skiing Cup (COSMIC) series and stay injury-free.

Do you have any advice for other competitive couples?
SK: It’s important to understand each other’s needs, both emotionally and athletically. Marshall is more of a “distance” runner and enjoys longer runs, whereas I prefer somewhat shorter runs and sometimes two shorter runs in a day. Compromising is extremely important.

JMT: Be understanding about the other’s schedule and training. Our schedules—whether they be work, training, racing or social—are never ideal. Most importantly, in partner races I always let Stevie cross the line first!