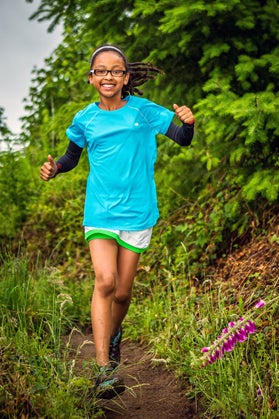 The first time I saw Jaye-Linh Shark was at the Badger Mountain 100-Miler in Kennewick, Washington. A wispy bundle of energy, dark braids flying out behind her, she was helping crew her dad, Jonathan Shark, a major in the U.S. Army.

Most kids would be grumpy after long hours cruising desert hills in the backseat of a minivan. But as her dad arrived at each aid station, the then-10-year-old dashed out to greet him with a bear hug. When he complained about the pain, she encouraged him to buck up and keep going, coaching sternly: “I thought you were a Shark.”

Several months later, I saw her again, running alongside her mom, Linh Shark, at the Taylor Mountain 5-Mile, Half-Marathon, Marathon and 50K in Issaquah, Washington. Thanks to record rainfall that weekend, the runners at Taylor slogged through waist- deep river crossings, as well as ankle-deep mud and horse poop. Thunderclaps and freezing rain caused many to drop to lower distances than they’d signed up for—but not Jaye-Linh.

She’d signed up for the full marathon—her third in 71 days—to qualify for the Marathon Maniacs, an international club of runners who have completed at least two marathons in 16 days or three marathons in 90 days. Says Linh of her daughter, “I remember glancing over and seeing her clothes dripping wet, her lips pale and her teeth chattering. It was then that some guilt as a mother started to fill my head. I let her make the call—to quit or continue.”

Taking a cue from her dad’s mantra—”Sharks don’t quit”—Jaye-Linh made up her mind. Eight hours and 18 minutes after the start- ing gun went off, she crossed the finish line, soaked and shivering, but triumphant.

Tell me about the marathons you’ve run.
It was cool to get the hardest one done first at Squak Mountain [7600 feet of elevation gain], then Soaring Eagle. At Taylor, my third, I was so cold and my mind kept wandering to that TV show, I Shouldn’t Be Alive. On the first lap, my mom fell in to the river, and I laughed at her. The second time, I fell in, and my mom laughed. It was instant karma.

When you ran Squak, did you know you wanted to join the Maniacs?
Nope! I ran that one on two days’ notice! My parents were talking about it and asked if I wanted to run it with them. I’d already run a few other trail races, including a half-marathon. At first I wasn’t sure, but they said I wouldn’t have to run the whole thing. There would be a lot of climbing, so I could walk—and they said it wouldn’t be too hard as long as I hydrated and ate. So I said, what the heck, sure. I figured it would be a good way to spend time with my dad before he left for Afghanistan.

What is your training like? I used to do track, but I hated it. There’s no adventure in running on a treadmill, or around the neighborhood. I like trails, where I have to cross rivers and hop over trees. Sometimes my mom gets off work early, and we do short runs on nearbytrails. She’s always surprised I don’t get more sore after races—but I think it’s because I don’t go the same pace as her. When you go faster, you start to cramp up. My parents think I’m crazy, but I don’t feel any pressure to go fast. What do you like to eat? My parents have been vegan for a while. I thought about becoming a vegetarian, but my brothers like chicken and stuff, so it’s hard to stay away from it. Plus I go to an after-school program, where I can’t really choose what I eat.

Any post-race traditions? It’s a tradition with my ma—every time I’m done with a marathon, we get pho [a Vietnamese noodle soup]. My dad’s tradition is to get a Coke and a Snickers bar, but only if the race is longer than a 50K. Marathons don’t count.

Who are your biggest role models? My parents. When we run together, we always laugh a lot. My mom makes huge progress all the time, and really inspires me. My dad puts himself out there to do all these crazy races. In their walk-in closet, he has a whole line of medals. I like to run my hands through them and listen to the sound they make. He loves medals. I’ve done a lot of races, but I always do trail, so that’s why I don’t have a lot of medals.