Karl Meltzer dominates as Masters Trail Runner of the Year 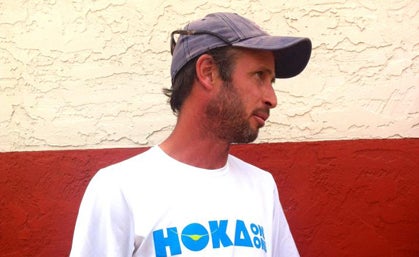 At the 100-mile distance, no one comes close to matching Karl Meltzer’s record—a stunning 35 wins—and, at 44, Meltzer (aka Speedgoat) is still notching victories over younger and stronger-than-ever fields. In 2012, he racked up three top-box finishes, including the hyped, inaugural Run Rabbit Run 100 in Steamboat Springs, Colorado (he also added $11K to his bank account for that win).

In fact, since joining the 40-year-old-plus Masters ranks, Meltzer has tallied 14 of his wins, from Virginia to Alabama to Colorado to California. At the notoriously punishing Hardrock 100 (34,000 feet of elevation gain, mostly on technical ground at an average elevation of 11,000 feet) in the rugged San Juan Mountains of southwest Colorado, Meltzer has made his mark, tallying five wins in 10 starts from 1999 to 2012. He still holds the counter-clockwise record of 24:38:02 for his 2009 performance, at age 42.

Coming from a Utah ski-bum pedigree, Meltzer trains by feel and runs a “modest” 60 to 70 miles per week, although most of his running is in the mountains between 8000 and 12,000 feet. His long runs aren’t huge, 15 to 20 miles, and he attributes his relatively injury-free career to listening well to his body and allowing adequate recovery between races.

In 2007, in the super-steep Wasatch Mountains his backyard, Meltzer founded the immediately popular Speedgoat 50K. This burly race features 11,600 feet of climbing, and attracts a high-caliber field. This year, the Catalonian sensation Kilian Jornet finished first, although controversy swirled around his Euro switchback-cutting technique (see below); the second runner across the line, Rickey Gates, was awarded the top cash prize.

Meltzer lives in Sandy, Utah, with his wife, Cheryl, also an ultrarunner, and makes his coin through his running and coaching.

What are your 2012 personal highlights?
My highlight for 2012 is definitely winning the Run Rabbit Run 100. I was not the favorite going into the race. I gave myself a “chance” to run top five, but never thought I’d walk away with a win and the money. When speaking with the RD, Fred Abramowitz, about putting on a 100-miler with a decent prize purse, then actually helping to make it happen … winning it was pretty special.

It’s fair to say that I “schooled” everyone, with the way the race panned out, but I ran my own race as I always do. I never let others dictate what I do, which I think in 100s is the smartest approach. A lot of variables come into play over such a long distance.

The second highlight was winning the Grindstone 100 [in Sedalia, Virginia] three weeks later. I was on a pretty big high, and had a lot of confidence after RRR. Neal Gorman and Jason Schlarb were both there, and I knew they would press me. I responded like a pro, exactly when I wanted to as Neal and I were within two minutes of each other at mile 60. I ran harder on the technical terrain and ran away—it felt great to be able to do that.

How has your training changed since hitting the big Four-O?
My training hasn’t changed at all since I started running ultras. I run up mountains, hike a lot up steep trails. I probably climb a bit slower than I used to, but I’ll never do intervals or speed training—it’s not my style. I run quality effort just about all the time I train. Being older doesn’t make it any different. Descending, I can still fly if I want to.

What is your advice to aspiring 100-mile trail racers?
My advice is to have a plan. Run your own race, and don’t let others suck you into going too fast early. I see it every race where, after 20 to 30 miles, folks fall off the pace. I just keep plugging along, and I’ll say it one more time: “We don’t have to run fast, we just have to run all day.”

Speed means nothing at the 100-mile distance, even guys that run 13 hours. When running a 13-hour pace for 100 miles, elite runners still aren’t working hard. It’s just a matter of whether or not they can sustain that effort to the end.

As a coach, what do you see as the biggest misunderstanding about how to train for trail running?

I think most folks feel big mileage is the key to completing 100-milers, 50-milers even 50Ks, but the fact is it’s not all about big miles, it’s learning “how” to manage issues. To succeed at running trails, you must run trails all the time. There is no substitute. Speed work on a track is also not the answer. Learning how to “levitate” over rocks, roots, uneven terrain is far more beneficial than running quarters in 65 seconds.

Trails generally mean steeper hills as well, so running them works like poor man’s speed work, and learning how to descend without pounding the body can translate to faster times. Many folks don’t practice descending fast and smooth. If you watch great descenders, like Dave Mackey and Kilian Jornet, you’ll see why times are coming down quickly.

Tell us about your luge run and is luging good cross training?
The Luge … well, that’s my little secret, but I will say that it now has 31 turns, four rollers, is a quarter mile long and drops 200 vertical feet. Top speed might be around 20 mph, using a modified plastic sled that is doubled up with a board mounted on the front to keep the feet in. The current descent record is 69 seconds, longer than an Olympic luge time.

It is located … in the mountains, and it is great cross training in December and January—there are a total of 579 steps in our boot pack, which climbs 200 vertical feet. I typically do about 10 to 15 laps, so about 2500 to 3000 feet of climbing, not to mention the maintenance of raking, smoothing and creating perfect turns. It’s an engineer’s dream job.

What are your goals for 2013?
My goal race for 2013 is to run a solid double at Western and Hardrock, then follow that up with a good solid run at Run Rabbit Run 100 again. I bagged running the Grand Slam because I would rather run for money, support Run Rabbit Run and the idea of a large prize purse. I’ll probably run UROC [in Vail, Colorado] after that as well, but it’ll just be for fun as I’ll be tired.

How is Speedgoat shaping up for this year?
Once again, the Speedgoat 50K will have at least a $12,000 prize purse, and, hopefully, we can get that to $20,000. It will be a Skyrunner World Series race again, so many international fast runners will be there. We are also working on a beer sponsor for the post-race party, but that may be tough here in the land of Zion.

What do you like and dislike about race directing?
Race directing is a lot of work. It starts now in January, and slowly builds up to the final two weeks. It can be hectic, but the real reward comes at the end when runners swear at me saying the course was brutal, or that it was an amazing experience. I am a bit older now, so I enjoy giving back through race directing at a kick-ass race. I will always do my best to create a hometown feel—it’s important to stay within our roots.

The worst thing? Having to make a decision like I had to last year [disqualifying] Kilian Jornet for cutting corners. I felt horrible about doing that, but I had to. I hope he comes back, but if not, he is still a super-classy athlete. He took it in stride, and that really made me feel good, in a weird kind of way.

Favorite race?
Hardrock, hands down. I really do wish they would run a world class “race” instead of it being a “run.” It would be amazing if we could gather 50 to 100 of the best mountain runners in the world on such an amazing venue. There is nothing wrong with what they have now, but I’d still love to see all the big dogs go at it there. There are a lot of crazy variables when running up at 12,000 feet all day, many more than even UTMB, or any other 100-miler.

Favorite golfer?
Bernhard Langer. German legend. I picked him out of nowhere to win the 1986 Masters, when sitting in a classroom in high school. I think I won a $20 bet.