Vail, Colorado’s Ellen Miller returns to the top with a little help from titanium

When Ellen Miller, 52, of Vail, Colorado, stood on top of the world’s eighth-highest mountain, Nepal’s Manaslu, … 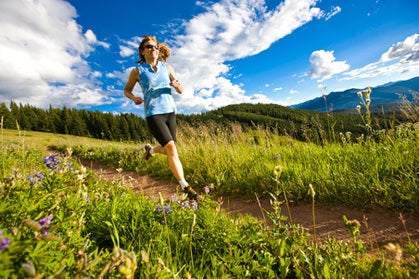 When Ellen Miller, 52, of Vail, Colorado, stood on top of the world’s eighth-highest mountain, Nepal’s Manaslu, at 26,759 feet, last October, it was not even close to her highest summit view. The Colorado runner and climber had already beheld the world from its highest vantage point—twice. She became the first North American woman to summit Mount Everest from both sides when she reached the top via the South Col route from Nepal in May 2002, a year after climbing the Northeast Ridge route from Tibet in 2001.

But for Miller, the view from Manaslu’s summit may have been the sweetest. The mountain’s name comes from the Sanskrit word manasa, meaning soul or spirit. And Miller’s successful climb of the peak last autumn was a cherished homecoming to the mountains, one that may speak louder about her essence than any other climb she has done.

In 2007, the USATF certified running coach and manager of the Women’s United States Mountain Running Team (USMRT) began experiencing pain in her hips. After traveling to Europe and competing in the GoreTex Transalpine Run stage race that summer, she went to see a physician in Vail. He sent her in for an MRI, which revealed that Miller’s hip cartilage was shot. Hip specialist Dr. Michael Dayton’s summation was succinct: Most human joints are made to last about 100,000 miles, and hers were worn out.

Miller surpassed that 100,000-mile mark in the previous few years during hundreds of trail-running races, adventure races and mountaineering trips she had pursued for decades. Along with Everest, she has summitted Cho Oyu, Mustagh-Ata, Ama Dablam and Lhotse in the Himalaya; Alaska’s Denali; Aconcagua in the Andes; Kenya’s Kilimanjaro; the volcanoes of Ecuador and all 54 of Colorado’s 14,000-foot peaks. She raced on the FILA Skyrunning Team, a group of American runners that competed in an annual circuit of high-altitude marathons held in Tibet, Mexico, the U.S. and Europe in the 1990’s, and included courses that reached elevations of 15,000 feet. Miller also competed internationally as an adventure racer at Eco Challenges in Patagonia and Borneo, along with numerous other expedition races.

“Ellen is so humble, I don’t think she ever once told me about any of her accomplishments,” says three-time USMRT member Brandy Erholtz, who got to know Miller through the Vail coach’s role as team manager. “It wasn’t until 2008 when I was on the team for the first time that I learned she had climbed Everest not once, but twice.”

Miller’s diagnosis meant she would need duel hip replacements, and the ensuing surgeries left her future ability to run and climb in doubt. Even for the typically upbeat Miller, the diagnosis was initially devastating. “I was in shock,” she says. “I remember thinking, `I may never run or climb again.'”

“Everyone is going to experience some kind of significant physical loss as an adult,” she says. “The real challenge is: what do we do about it?” After intensive research, she underwent her first hip replacement in May 2008, at the University of Colorado Hospital in Denver.

Three months after her surgery, Miller started trail running again, though initially she was restricted to uphill jogging. She began with slow ascents up the trails on Vail Mountain, boarding the ski area’s gondola for the trip back down. At seven months out, she got the OK to start gentle downhill jogging as well.

“Trail running is what got me back to that daily place of joy,” says Miller. “It is a thread through my life that keeps me connected to people and to the mountains.”

Running was also a key piece of Miller’s training plan to test a return to climbing, and, in May 2009, she went back to the Himalaya to attempt the technically demanding Lhotse. Her summit bid, achieved in a tiny expedition with one partner, Nima Tsering Sherpa, was successful, and she became the second North American woman to summit the peak.

Few of Miller’s close friends were surprised by her comeback. Longtime friend Dawes Wilson dated Miller for several years and also trained and supported her through the long hard hours of many challenging endurance events. While visiting her in the hospital after her first hip replacement, he says he realized “she would return, not just by being tough, but by being smart and patient. Ellen is a person with mountain spirit. The challenges of age and joint fragility won’t change that.”

In fall 2009, Miller had her second hip replacement, and decided once again to road test it with a major Himalayan climb. Once again, she incorporated running into her pre-climb training regimen, and just like the year before, assessed the status of her second new hip with a trail-race shake down. After her first hip replacement, she returned to competition by toeing the line at the eight-kilometer Cheyenne Canon Mountain Race; this time, she chose a small race at home, the 2010 10-kilomter Vail Summer Solstice Run.

While returning to climbing and running was important to Miller, she says the work she does on behalf of others is what truly inspires her. She is currently manager of the Women’s United States Mountain Trail Running team, Vice President of the American Trail Running Association and an organizer of fund-raisers such as Vail’s Climb for Literacy, which raises money and awareness for organizations such as Room To Read, a non-profit that partners with communities in developing countries to improve opportunities for literacy and education. She also raises funds to support Sherpani schools in the Khumbu region of Nepal, where she returns each year.

Says Miller, “We can choose to use our sports to create positive changes for other people or places. That is really what it is all about for me now.”