Jared Fetterolf’s trail-running career off to a fast start 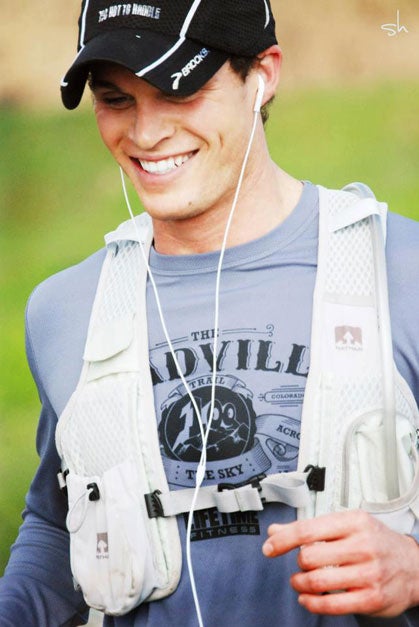 Our sport poaches many a college athlete from the realms of cross country and track and field—but those aren’t the only teams from which young talents are bringing their fast legs and competitive spirit to the trails.

After playing D1 tennis at Center Point High School, Jared Fetterolf of Austin, Texas, went on to major in Tennis Tech at Tyler Junior College. During a stressful week his freshman year, Fetterolf put on some running shoes and went out for a two-mile run. Says he, “Boy, did that feel good! The endorphins were potent for fighting off stress.”

He describes himself as having quickly grown addicted to those endorphins, spending more and more time on the roads and trails, rather than on the tennis court. After a couple of months, he was running six miles every other day.

From there, it was a slippery slope—he ran his first half marathon, then a full marathon, then his first 50-miler, at the age of 20. Now 24, he’s completed 26 ultramarathons, with more than half being 100 miles or longer, including well-known favorites like Alabama’s Pinhoti 100, Utah’s The Bear 100, Arizona’s Javelina 100 and the venerable McNaughton 150-miler in Pittsfield, Vermont.

Though Fetterolf enjoys everything from kayaking to playing volleyball, racquetball and the occasional game of tennis, he says he loves running because it allows him to truly test his athletic abilities.

“Tennis definitely did not take me to the level of a beaten, battered body,” he says, laughing.

He works at Jared the Galleria of Jewelry in Austin, and at Heat Bootcamp as a personal trainer. His twin brother, Jacob, runs ultras as well.

How did your interest in running transition into a passion for ultras?
After I’d run a few marathons, I was working out at my gym when another athlete asked me if I had ever heard of the “ultramarathon.” With a few details from him, I went home to Google this new terminology, found a 50-mile endurance run in Huntsville on December 6, 2008—my 20th birthday—and signed up for it. I ran for 8 hours 29 minutes, placing 20th.

What has been your favorite race so far?
The 2012 Heartland 100. It down-poured for 10 hours. There was thunder, lightning and mud. I thought for sure the race director was going to cancel the race, but, sure enough, we were allowed to keep running! Not once did I experience that extreme fatigue that so many runners confront during ultras. I ran it in 16 hours 14 minutes, my fastest 100-mile time.

McNaughton 150 is a pretty stout accomplishment. What was your experience?
It was my toughest race to date. It took 53 hours 13 minutes and also rained for hours on end—there was snow, sleet and mud everywhere. I was miserable on that non-forgiving mountain, but no way was I going home without a belt buckle. Toward the end, one of the aid stations had run out of food, and my drop bag was empty. Fortunately, a very sweet lady brought me warm pancakes.

What does your training look like?
My training is at least a 14-mile run every other day, usually along the highway in Austin. Fortunately, there are a lot of hills. On the others days, I resistance train to prevent injury.

What kind of diet do you maintain?
My diet consists of organic or all-natural foods that have high protein and high antioxidants. I consume a lot of high-calorie protein shakes and fresh greens. Also, lots of water, with supplements such as multivitamin, fish oil, resveratrol and COQ10.

What are some of your must-haves for ultras?
Headlamp, wool socks, anti-chafing cream, protein shakes, sunscreen, iPod and a great crew of friends for support!

Who has inspired you in your life?
Dean Karnazes. He started at age 30. By starting at age 19, I feel I have a very long ultrarunning career ahead.