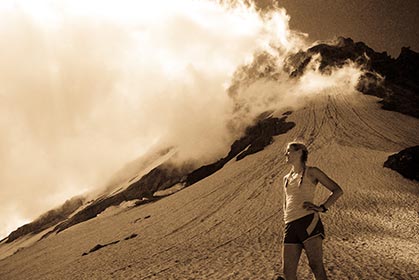 Most runners know the overwhelming defeat of being injured and having to take a few weeks or months off. For Katie Reim, now 32, this lasted five years. Starting in 2006 with headaches and nausea, her list of symptoms steadily grew as her strength diminished.

Reim, then a dedicated road runner and photographer, was living in Philadelphia, struggling as a freelance illustrator. After three years in the dark about what precisely was afflicting her, she was found to have Chiari Malformations (CM), a difficult-to-diagnose disorder characterized by structural defects in the cerebellum and brainstem. After the diagnosis, she eagerly underwent brainstem decompression surgery. Though risky, the surgery relieved pressure on her brainstem and, consequently, relieved her symptoms.

Reim moved from Philadelphia to Portland, Oregon, and adopted a dog as a companion on the trail to her recovery. Her illustration work picked up and, while recovering from surgery, she created an online business making wedding accessories. Reim also began documenting her runs with photos. Though she still feels a flash of dread when she has to climb the stairs, she’s now able to run up mountains. She trains on the most difficult trails she can find around Portland and finished the 2014 Squamish 50-mile race in British Columbia.

We talked with Katie about her long road to recovery and finding meaning and beauty in trail running. 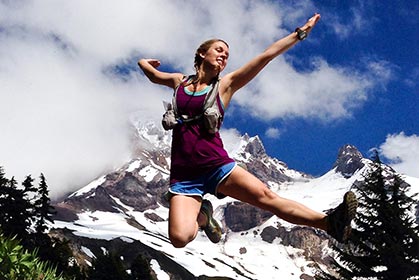 1. How long were you unable to run?

I was unable to run for the three years before my diagnosis. It took another two years after surgery before I could run a mile.

By the time I was diagnosed, in order to get up the flight of stairs in my home, I would use my hands and crawl slowly to the top. This simple chore would make my heart and head pound and my breath heavy, and leave me exhausted. The most difficult part of becoming so weak was losing control over what I could do, who I could be, and what I could accomplish in my own life no matter what my drive or desires were.

2. What kept you motivated during this arduous time?

Recovery was slow and required patience I didn’t feel like having. I wanted my life back, and fast. Even after surgery, a rise in heart rate would make my head pound and could leave me incapacitated for days.

One of the few positive stories I had read in a CM support group was from a man who had run a marathon after decompression surgery. I thought, if he could do it, so could I. I had to ease into running very slowly, but I wanted it more than anything.

3. When did you start taking photos during runs?

Pre-surgery, I was a casual road runner, and while photography was a huge part of my life, the thought of stopping and taking photos while running never crossed my mind.

Then, while I was sick, I would daydream of the early-morning long runs through farm country I would do before class in college. They seemed so distant and unreal that I wondered if I had ever actually done them. At that time, I wished I had a photo from those days, since I felt like it would help make the memory more concrete.

4. What about photography has helped you appreciate your running experiences since you’ve come back to running?

I think while I’m out in these spectacular places, instead of grinding through the tough terrain with my head down, I’m constantly checking out lighting and composition. I don’t miss an ounce of beauty that I pass by. It helps me be in constant awe of where I am and how I got there.

5. What about trail running, mountains and wilderness made it the best environment for your recovery?

Nothing excites me more than the beauty and discovery you only find in the wilderness. The mystery of what I might find behind each bend motivates me to keep going farther and farther. Long, isolated solo runs also leave a lot of time for reflecting in an almost meditative and very therapeutic way.

6. What inspires you to travel to the places you do?

I am constantly chasing the high I find from remote trails and breathtaking scenery. Everything from vacations to my daily run seems to revolve around this now. I don’t want to waste any opportunity to be healthy, get stronger and live fully, since I know firsthand that it’s never a given for anyone.