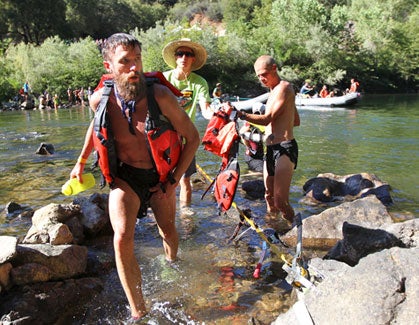 Amazingly, Krar was a 100-mile virgin, and WS100 would make just his fifth ultra, his first occurring last November, with Nevada’s Bootlegger 50K. A pharmacist by profession, Krar concocted a disciplined race strategy and beat the heat. “I had to be the smartest runner I’d ever been in a race,” says Krar, “running a very slow and controlled pace, staying on top of hydration and nutrition and simply waiting to see as the hours and miles went by if my body was going to make it.”

In May, Krar placed himself on the ultrarunning radar with a stunning Grand Canyon Rim-to-Rim-to-Rim FKT of 6:21:47, besting Dakota Jones’ record by 32 minutes. In an irunfar.com account, Krar speaks of digging deep on the home stretch in blasting heat: “I took a few moments to remind myself of the dark place I was about to enter, a shade of gray where the pain and exhilaration of the moment combine into a state of being I both fear and yearn for.” 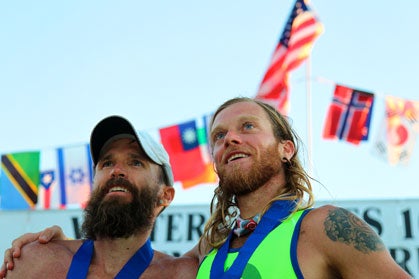 Krar and champion Timothy Olson at the Western States finish line. Photo by Glenn Tachiyama
Born and raised in Hamilton, Ontario, Krar moved to Flagstaff in December 2005. At the 2009 TransRockies Run, Krar met Christina Bauer, whom he married in 2012, “in a meadow above Flagstaff.” Krar calls Christina, a high-school counsellor, a “kick-ass runner herself;” indeed, she finished sixth in this summer’s San Juan Solstice 50-miler, a burly race in southern Colorado, and is training for Utah’s Wasatch Front 100-Mile Endurance Run.

Krar attended pharmacy school at Butler University in Indianapolis, Indiana, where he ran cross country and track. For the past 11 years, he has worked as an overnight pharmacist at Walgreens, working a seven-days-on, seven-days-off schedule.

In April 2010, Krar underwent surgery for Haglunds Deformity, which are large bumps on the heels of the feet, a painful condition due to the Achilles tendon wrapping over and around the lumps. “The surgery and long recovery reminded me how much I value the time I spend on my feet and the roll it plays in my mental health,” says Krar.

It was twice the distance I’d ever run before, and I had doubts about my body handling it. Honestly, I’m stunned how well both my body and mind responded. In some ways, it was the most comfortable ultra I’ve run.

Better than expected. This time last year I still thought ultras were silly long and never entertained the idea. Each bump in distance was intimidating but I ran my own race each time and soaked in the experience. I was hooked quickly!

Q: Who do you respect most in trail running and why?

I’ve learned the sacrifices involved in training and racing and the toll it can take to those close to you. So I admire everyone who toes the line, each with his own stories and struggles. Meghan Arbogast [of Corvallis, Oregon] in particular has inspired me with her story and perseverance and the times she’s throwing down in her 50s [see Trail Runner, “The Heart of the Matter,” April 2013, Issue 87].

Q: You’ve done a lot of running in the Grand Canyon. What is the allure?

Easy access helps! We’re a 90-minute drive from the trailhead. The Canyon has an allure and power that’s hard to describe. I’ve had some of my greatest and most fond running efforts in the Canyon, but also some of my most devastating and desperate times as well.

Q: Highlights of your R2R2R FKT?

One of the highlights was the 28 miles north of Phantom Ranch. The road to the north rim hadn’t yet opened, and the trail was eerily void of others, adding to the sense of vulnerability and loneliness. It also allowed me to fall into a deeply focused mindset and run very strong and comfortably during those miles.

Q: What other running accomplishments are you proud of?

The 2012 Moab Red Hot 33k was the stepping stone for my transition to trails and my return to racing. It was my first race in two-and-a-half years and followed a long recovery from surgery when I’d given up the hope of ever running easily with friends, let alone racing competitively again. Running strong and winning that race was unexpected. I wasn’t even running at the time, and my training was solely skinning and skiing the mountain here in Flagstaff. But it opened my eyes to the possibilities.

Q: What is your athletic/running/racing background?

I participated in cross country, track, water polo and badminton in high school, and triathlons in the summers, and went to Triathlon World Champs in 1994 and 1995.

Q: How did you get into trail running?

After hitting the roads in 2007 and 2008, my body had had enough and led to injuries and eventually my foot surgery. Trails are much kinder to my body and after the long recovery from surgery and my run in Moab, the trails seemed to beckon me. I appreciate the more laid-back nature of both trail races and those who participate in them, such a friendlier and less stressful niche of running.

Q: How did you evolve into running ultras last year?

Unexpectedly! I had some friends traveling to the Bootlegger 25K/50K in November and decided to join initially for the 25K and at the last moment hopped in the 50K to see what would happen. I really enjoyed the experience [he came in second behind Jason Wolfe]. From there it really snowballed and after another really strong winter of skinning and skiing and a strong race at the Leone Divide 50-miler [a win], I decided to take the plunge and commit to Western States.

I’m putting in 60-to-100-mile, six-day training weeks. Slower, easier efforts mostly, and no workouts thus far this year. Lots of the little things count—circuits twice a week, stretching, foam rolling, icing, eating healthy, respecting sleep as much as I can with my overnight work schedule, listening to both mind and body and taking an extra day off when needed.

Q: How are your training weeks when you are working the seven days on?

My weeks start and end on Wednesdays, which allows me to be back on a normal schedule come race weekends. Training-wise, the weeks I’m working are challenging. I get off work at 7 a.m., am in bed by 8 then wake up about 4 p.m. I take an hour or so to relax, drink some coffee, read the paper then get the days work done. My milage drops slightly during work weeks but it’s still close to 80 miles. I ease on the intensity though. I’ve been doing it for over a decade now, so have found a routine that works.

Q: Do you train or do races with Christina?
Occasionally, but I think we’d both agree it’s not the best thing for our marriage!

Q: How do you compare the experience of a solo FKT to a big-race like WS100?

Both are incredibly special. A solo FKT is a much more personal and intimate experience. WS100 was incredible for the energy and excitement you’re surrounded by, not just during the race itself but for the several days surrounding the race. I feel so fortunate to have experienced both.

Q: Goals for the rest of the year and beyond?

I tend not to plan too far ahead so have nothing on the calendar. I’ll take some time to relax and recover from WS—the river has been beckoning me for some fly fishing—then see where I’m at mentally and physically.

Q: Interests outside of running?

I learned how to flyfish and rock climb during my time away from running. I fell in love with both and cherish any opportunity I get to be on the river or rock.

I eat a mostly vegetarian and organic diet and am always trying to reduce my footprint.

Q: So, with you Grand Canyon and WS100 accomplishments, it appears you like to run in the heat …

Ha! I certainly don’t like running in the heat, but come race day, it is what it is. I feel it’s an equal playing field and the smarter runner will have the better chance of performing well. Heat management goes a long way.

Q: How has your foot injury/surgery affected your approach?

I’m much less willing to take the risks I once did in training and racing. It has resulted in two years of injury-free running and racing, and I enjoy it more than ever. Sometimes it takes the difficult times to truly appreciate the opportunities we have.

(This article was originally paired with a giveaway of HOKA shoes. The contest has already passed. Thanks to all who participated.)