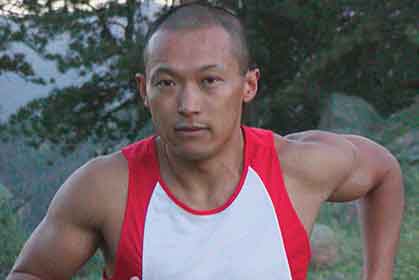 This article originally appeared in our April 2008 issue.

Maybe it was the king like golden robes he wore in the photo. Or that the photo hung above the Buddhist altar. Or that the drill was to bow toward the photo when I entered or exited the Sacred Studies Hall of the Shambhala Mountain Center. In any case, I got the idea that this guy in the photo—Sakyong Mipham Rinpoche—was important.

Turns out, I was right. Born in 1962 in India, Rinpoche is the spiritual director of the Shambhala Buddhist community worldwide. As well as being a teacher and meditation master, Rinpoche is a best-selling author of Turning Your Mind into an Ally (Riverhead Trade, 2004) and Ruling Your World (Broadway, 2006), poet, artist, husband and marathoner. But when he decks out in his running shorts, he seems, well, pretty much like the rest of us trail hounds. Participants in this year’s Running with the Mind of Meditation program had the privilege of talking and running with Rinpoche. As we sat on our meditation cushions after our run, the gentle leader enlightened us.

Can you meditate when you run?

A lot of the time people put meditation in a category of just mental activity, and we tend to think of running as just physical. But clearly mind and body are together and inseparable.

How do you purposely get into a meditative state and find “the zone” when running?

Mildly pay attention to your feet and your breathing, rather than spacing out or thinking about other things. It’s a matter of balancing mindfulness not too tightly, not too loosely. When you find that balance, all of a sudden the mind gets totally into the groove. We think of it as accidental, but something in the mind brought those conditions together. When meditating, you’re bringing those natural conditions together all the time.

Running meditation has a bigger sphere to which you’re paying attention. You can use the striking of the feet as a constant. You can also use the breath, but it tends to be less consistent when running. When your mind wanders enough that you trip, you’ve left your focus. The point is to bring your mind to the activity. Even a little bit of it will be beneficial.

Should I shut off creative thoughts when on a meditative run?

Thinking is not bad. But thinking uncontrollably is not helpful. How powerful would it be to draw up creative thoughts day or night when you want them? Meditation gives you this freedom and power. If you need to think, go ahead and think while you’re running. If you want to meditate [while running], then meditate. Keep them separate.

Running sometimes involves suffering, which makes it harder to meditate. Any advice?

If you’re hurting yourself, stop and take care of yourself. Some pain can be good mindfulness because you’re right there in the moment. You’re not trying to shut the pain up, but to learn to live with it. You’re not just using running as an escape. Athletes who are good at what they do incorporate the challenge.

How does running benefit the world and not just ourselves?

A Tibetan lama runner is pretty much an oxymoron, but now I raise money [for Tibetan organizations] through my running, and so people say, “When’s your next marathon? We’re all praying for you.” But, seriously, I think for myself it’s demonstrating that physicality is very important. Taking care of your health is important.

Do you have a personal goal for races?

Well, the first one is just to finish. And actually the second one, too. I’m trying to run the Chicago Marathon in under 3 hours. [He ran the course in 3:30:16—a respectable time considering the record setting heat on race day.] In the beginning when I was running, people tried to limit it, so I could get back to work. I think now they realize that running is healthy, and the longer I live, the more I can do.

How do you keep up with your training for marathons when you travel so much?

When I was at a monastery last winter, I wasn’t running. And then they gave me a treadmill. It was amazing. I was running in a monastery on a treadmill, which was probably one of the most bizarre experiences I’ve ever had. When I ran, I would think, What am I doing? But then there’s another kind of exercise called prostrations [a practice of purification and devotion in which you progress from standing to kneeling to bowing to lying on your stomach with hands outstretched and then reverse the moves back up to standing]. I recommend those, too.