Candice Burt rolls past 93 miles, two black bears and two mountain lions on a solo circumnavigation of Northwest’s iconic mountain. Comment on this article and be entered into a drawing for a Nathan Speed 4r hydration pack, provided by Fairhaven Runners in Bellingham, WA (winner announced here 10/30). 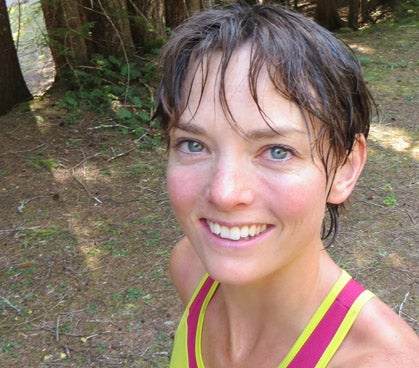 Candice Burt after her wild 93-mile adventure around Mount Rainier.

While there may be more well-known (and longer) “long trails” where runners push Fastest Known Times (FKTs), e.g. Vermont’s Long Trail, California’s John Muir and Pacific Crest trails, etc., one of the most aesthetic, toughest and logical (it runs around a mountain!) trails is Washington’s Wonderland Trail. A 93-mile circumnavigation of the Northwest’s iconic and tallest peak, Mount Rainier (14,411 feet), the trail involves 27,000 feet of elevation gain (and loss), route-finding challenges and potential predatory wildlife encounters.

Inspired by other recent FKT activity on the Wonderland and spurred by a recent DNF, Candice Burt, 30, of Bellingham, Washington, set out on a solo mission this September 19 to break the current unsupported (no caches or outside help, i.e. carrying everything you need on your person) FKT on the Wonderland.

Just the week before, that record had been broken by John Reese of Coeur d’Alene, Idaho, who completed the circumnavigation in 28 hours 50 minutes over September 14-15 (in August 2011, Adam Lint of Seattle, Washington, had set the previous record of 30 hours 30 minutes). (As a side note, over September 6-10, Washington’s Jason Vaughn accomplished a double run of the Wonderland in 80 hours 35 minutes.)

During her adventure, Burt, the race director of the Bellingham Trail Running Series (BTRS, www.Bellinghamtrail.com), Bellingham Trail Marathon (www.Bellinghamtrailmarathon.com) and Cle Elum 25K/50K (www.Cleelum50k.com), however, was slowed by several scary wildlife encounters, hallucinations and route-finding difficulties, and completed the trail in 31 hours 11 minutes 57 seconds, setting the women’s unsupported mark for the Wonderland.

“Knowing Candice and other runners that have gone beyond the boundaries of normal civilization has allowed me to sign up for events that common sense would have prevented,” says Chad Calhoun, 40, of Bellingham, a local ultrarunner. “The great thing is that nobody yet knows the limit to Candice’s energy. Her BTRS has been a boost for the community, bringing fellow trail runners from Canada, Seattle and beyond.”

What is your athletic and running background?

I grew up on a small farm on Whidbey Island. As a kid, I was very active, playing outside, climbing trees and riding horses. I got into running in high school when I joined the cross-country and track teams.

But I fell in love with running when I began running on trails in the mountains. Before trail running, I ran for the exercise. Now I run for the solace, the connection with nature and to feel my body move.

How did you get interested in the Wonderland Trail?

I needed an epic run after DNFing at Plain 100 [in the Cascade Mountains]. I had had a great race at the Tahoe Rim Trail 100 in July, placing 2nd woman and 7th overall, and thought I could jump right back into training for Plain [September 8], but my body needed a break. I went into the race over trained and called it quits after 62 miles.

That inspired me to pick a route that would be tougher and more scenic than Plain. The Wonderland Trail has been getting a lot of attention from people going for FKTs, and I noticed that there wasn’t a women’s FKT. That seemed silly, and I knew then that I would go for it.

How did you prepare for the run?

The Plain 100 is a mostly self-supported run with just one aid station at mile 62. I had trained for that race by running with a heavy pack throughout August, so I was ready for the challenges of running the Wonderland Trail.

Why did you decide to do it alone?

It’s not that easy to find someone to run 93 miles with you on three days’ notice! Besides that, running solo was the simplest way for me to do the route on short notice.

Had you been on the trail before?

No, and that definitely presented me with the unique dual challenge of navigating and trying to run fast. I got lost several times. Of particular note was when I couldn’t find the trail at night on the glacier section. I wandered around for 30 to 45 minutes following footsteps that kept leading nowhere. I eventually found the trail, but at night it was very difficult to know where to go.

Tell us about your wildlife encounters?

I had a pretty frightening encounter with what I thought was a giant mountain lion around midnight. It was dark and the glowing eyes looked huge! But when the animal moved I realized it was too large to be a mountain lion. It was a bear. I backed slowly away and up a hill and grabbed the biggest stick I could find to make myself look taller and more intimidating. The bear didn’t seem to care either way.

Just 30 minutes up the trail I actually did see a mountain lion. It was terrifying because I was completely alone with no way to defend myself. I yelled and made obnoxious noises, hoping to scare it away. I used up a lot of energy on the next climb. Then, I encountered another lion, it could’ve been the same one, a few miles up the trail, and again yelled loudly to make myself seem unappealing.

My last large animal encounter was a sleepy bear, as the sun was rising. I disturbed the bear by shining my light in its eyes and then by making loud noises. The bear huffed at me and I decided to quiet down and slowly continue down the trail. As soon as I was around a corner, I hightailed it out of there!

What were the toughest parts about the run?

The trail gains somewhere around 27,000 feet. That really took a toll on my body. The mountain lion and bear encounters were also stressful. Running solo and carrying so much gear for almost 100 miles is tough enough without those additional challenges.

Tell us about your hallucinations and how they affected you?

By the second morning, I was really beginning to hallucinate. Tree stumps turned into cowboys; leaves on the trail transformed into hopping frogs. The hallucinations lasted throughout day two. I think because I was so tired they were more intense than I had ever experienced. I was falling asleep while trying to run. I knew I either needed a nap or a change of pace. I downed another gel, turned my music up and picked up my pace. That kept me from falling asleep, but my mind was creating an outward wonderland from my inner emotional journey.

Have you attempted any other long trails?

Yes, quite a few. I was running about 50K most weekends last fall and winter in the Cascades and last November I ran Utah’s 48-mile Zion Traverse [Burt set the women’s unsupported FKT]. A few days later I ran the R2R2R [40 miles] at the Grand Canyon. I also ran around Mount Hood on the 40-mile Timberline Trail solo, a week after the Wonderland FKT. September is a great time to run in the mountains!

Tell us about the Bellingham trail-running scene.

There are so many great trails in town and the mountains around the city, and we have two great running stores that support the trail-running scene. Fairhaven Runners and Walkers has been a key sponsor for the BTRS.

There are a lot of groups run trails, almost every day of the week. It is really an inspiring town to live in. In the summer, it is fun to run around the trails at Mount Baker, just an hour to the east.

Did you start the Bellingham Trail Running Series?

Yes. I began the BTRS in December 2011 after a year of assistant race directing ultra-distance trail races in Washington for Rainshadow Running and after competing in the Washington Ultra Running Series. I was inspired to create a similar series of short- to mid-distance trail races that could bring the trail-running community together in Bellingham.

I wanted to offer competitive, scenic, hilly, singletrack running. There are a number of road and urban trail races in Bellingham, but only a few races that are on mostly singletrack mountain trails.

I wanted to be a integral part of the trail-running community, and felt like I could offer community-centered, scenic trail races. It has been a fun and rewarding way to give back to this amazing community.

What else do  you do to pay the bills?

I also practice massage in Bellingham and teach sports massage at the Port Townsend School of Massage.

What are your future goals in trail running?

I’d like to continue to race direct fun and inspiring trail races in Washington. I am also working with a coach to improve my speed and focus my training on my key events for 2013. I’m a little obsessed with the 100-mile distance and anticipate more solo endeavors in my future. I like the self sufficiency and the inherent danger of a solo adventure.

My next goal race is HURT 100 in January. I will put in my ticket for the Hardrock and Western States lotteries and will run one if I get in.

Yes! The Tahoe Rim Trail [170 miles]. I’m not sure if I will do it unsupported or supported yet. There are more volcanoes to circumnavigate as well, like Mount Saint Helens.

You can read more about Burt’s adventures on her blog: www.wilddefined.com.