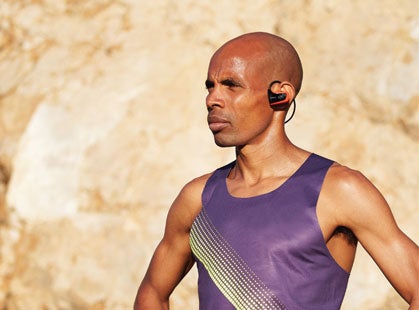 “I love running trails,” said American marathon superstar Meb Keflezighi in a recent email interview. “I run trails not so much for the adventure, but as part of my training for the marathon and half-marathon.”

Meb made history on November 1, 2009, when he became the first U.S. runner to win the New York Marathon since Alberto Salazar in the 1980s. Claiming four NCAA titles in the mid 1990s at UCLA, Meb continued with a professional career peppered with success. He represented the U.S. in the Olympics both in 2000 (the 10,000 meters, where he was 12th) and 2004 (the marathon, where he was second). Most recently, Meb took home the first-place slot at the 2012 Olympic Marathon Trials in Houston, Texas, when he crossed the line in 2:09:08, setting a five-second PR … at age 36.

But, what does it really take to achieve such outstanding success, and what does it have to do with trail running?

What have you sacrificed the most to achieve your athletic success, and how has it shaped you as an athlete and person?

One of the biggest sacrifices I made in my career was leaving my family and hometown of San Diego, California. It is a beautiful place to live and train, but I knew that to maximize my potential, I needed to incorporate altitude training. So in 2001, Deena Kastor, Coach Joe Vigil, Coach Bob Larsen and I started Team Running USA-California in Mammoth Lakes, now known as the Mammoth Track Club. This led to Deena and I winning Olympic Medals in 2004 and the resurgence of American distance running.

Today, Mammoth is home to over a dozen Olympians and Olympic hopefuls. As a person, this experience has taught me that you sometimes have to give up certain things to achieve a bigger goal. I had to sacrifice my comfortable life with family, friends and great weather in San Diego to train in Mammoth and become a world-class runner. If you want something bad enough, you have to be willing to take risks, sacrifice and work very hard.

What advice would you give an aspiring elite athlete—road or trail—to achieve that next level of success?

Surround yourself with positive (yet realistic) and knowledgeable people. The key to progressing as a runner is consistent training. Listen to your body: Take a day off or cut a workout short rather than pushing too hard and having to take a week or more off to rehab an injury. Additionally, keeping a training log will help you accurately track your progress.

What is the best injury prevention?

Stretching, both before and after a run. As I grow older, I spend more time stretching throughout the day.

How much sleep do you get a day?

I try to get at least eight hours every night. Also, if necessary, I take a 20-minute nap.

Do you use trail running as a strength-building tool? And why else do you trail run?

Yes, trail running definitely works and strengthens muscles that road running does not. For example, in preparation for the 2004 Olympic Marathon in Athens, I trained on a simulation course on some trails in Mammoth to prepare my mind and body for the hills I would encounter. When I got to Athens, though, and took a course tour, I realized that the race-course hills would be no match for the mountains we trained in Mammoth!

Compared to the road, trail’s soft, dirt surfaces are better for a runner’s longevity. But I must incorporate road runs into my training so that my legs are prepared for the pounding that comes with running 26.2 miles along city streets.

Would you have any interest in trail racing—if your ability to make a living off of running was the same?

That is a tough question. With my profession as a road racer, I have grown accustomed to racing on the roads and training on the trails. I love how close the spectators are to the competitors when racing on the road. So while I love the idea of trail running, because I do it often, my trail runs are really a chance for me to be alone and with nature. Plus, I am a specialized road runner now. At a younger age, though, I might have considered trail running more if the money was the same.

After your career is over, do you think you’d try some trail races?

No trail races for me. I have met hard-core trail runners and they have told me about their experiences. I can tell that trail runners are passionate and dedicated … I can appreciate those experiences without wanting to do it myself.

What is your favorite kind of trail?

I’m not very picky. The only thing I don’t like is a narrow trail.

Is there a particular trail you’re interested in running?

I have read or heard about some interesting trails around the world. I’m not the adventurous type, so most of my running is geared toward training for a specific race. When I retire, I see myself enjoying more of the spectacular trails that I have heard about.  But for now, I will settle for the trails in Mammoth and San Diego.

Do you have any interest in exploring what’s beyond the marathon someday?

In high school, I was a one- or two-mile runner. I hesitantly moved up to the 5K and 10K while at UCLA. In 2002, I ran my first marathon (in New York) and told my coach that it was my first and last marathon. Since then, I have come to love the marathon but, at this time, I can’t see myself racing anything longer.

What would it take to get you to run the Ultra Trail-du-Mont Blanc, a 166-kilometer alpine race with over 34,000 feet of elevation gain that circumnavigates Mont Blanc in Europe?

It would take an NBA salary for me to try a 166-kilometer trail run. I am very happy for those that can do it.