Chris Lundstrom is speedy—on and off the road. The 2:17 marathoner and former Stanford runner talks about whether top-level road talent can translate to trail success. 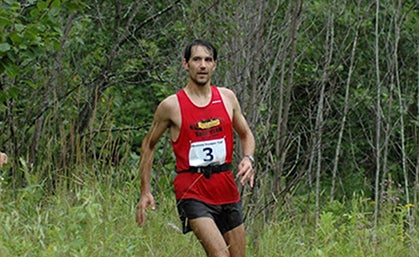 Most runners who can qualify for the Olympic Marathon Trials or break 15 minutes in a 5K would focus their energy on the roads or the track. Chris Lundstrom does, but, these days, only in between bouts of serious trail racing.

At 6 o’clock one morning in May, a dozen or so runners gather at the trailhead of Hyland ski area in Bloomington, Minnesota. Every week they meet to run a 7.5-mile loop that crests the small ski hill then loops through the bordering regional park before turning back. It usually takes them 55 minutes to an hour.

But this particular morning, just as the runners are about to set off, one last car pulls into the parking lot. Chris Lundstrom jumps out, his dog in tow. With Lundstrom at the front, the normally relaxed tempo ticks up, and the runners struggle to match his pace. But it’s useless—despite a bathroom break halfway through, Lundstrom dusts the group down the ski hill to the finish. His dog comes in second, around 50 minutes.

He is probably best known for qualifying for the past three Olympic Marathon Trials, and his other exploits on the roads as one of the original members of Team USA Minnesota, an elite training group that has included Olympian Carrie Tollefson.

But as Lundstrom, 36, of Minneapolis, continually seeks to learn from running, he has turned his focus to the trails. He ran his first trail race—the Superior 50K—in 2009 as part of his marathon training, and wound up with a course record (he won the race for the third time May 19).

“I went out really casually and there’s probably a good move on that course,” he says.

He has since notched two top-seven finishes at the San Francisco The North Face 50-Mile Championship—where he was third in 2010—and finished fourth at the American River 50-mile in April. In other words, Lundstrom is making the case that top-flight road talent can quickly transition successfully to trails and the ultra distances.

With his first child on the way, the PhD student in Kinesiology at the University of Minnesota says he doesn’t have immediate racing plans. “I’m sure I’ll be out there again,” he says. “Most likely I’ll be more focused on trails than the roads.”

What is your running background?

I ran at Northfield High School [in Northfield, Minnesota]. I actually went out for cross country as an eighth grader. It was kind of the standard story—I went out to get in shape for basketball, but I just found I had a love of running. Plus I found I was much better at running than basketball.

I went to state sophomore through senior years and did pretty well, but was never a state champion. The highest I placed was third.

Then, I ran for four years at Stanford and definitely had even fewer accolades out there. We had a really good team, and won nationals twice when I was there. It was cool to be a part of, but I wasn’t one of the stars.

What did you do as a runner after college?

The rest of the year there’s a similar road-racing circuit, which got me into the longer stuff. I did my first half marathon, and that went well.

In 2001, I came back to Minnesota and joined up with Team USA Minnesota, and have mostly been here since.

How did you get into trails?

I’ve trained on trails forever. Even in high school we did a lot of our training in the arboretum at Carleton College. And I’ve always liked cross county—trail runners don’t even think about it but it’s the same thing, just with shorter races.

My first real trail race was the Superior 50K in 2009, which really was just part of my marathon training. I like to do an over-distance run one or two times before the marathon, three-plus hours, and I like to do it on trails. It’s easier on the body, and you get extra strength work on your legs.

I looked at the course record and thought there’s no way [Superior 50K] was going to take me four hours. The trails I had been on were tamer and didn’t have the technical footing of Superior. It was more challenging than I thought it would be.

As a seasoned marathoner, do you think you have an easier time with 50Ks than 50-milers?

In my 50Ks I’ve always felt really strong and I can never say a 50-mile has gone really well, but I think that just comes with the territory. At American River I was really struggling between 35 and 45 and had to remind myself that it’s 50 miles, and it’s not supposed to be easy. Same at TNF—I had done a lot of training on those trails when I lived out there and knew the course, so I felt great through 33, 35 miles and then I was in the hurt basket for a while. But the cool thing was that for the last seven or eight miles I felt good again. I definitely learned something about the distance that day.

Ultras require a very different mentality, and where most of the talented road racers struggle is being relaxed enough early on. I don’t think people understand the consequences of miscalculating your pace, even in just a 50K. You see it in a marathon—you’ll have a 13:10 5K guy who’s never tried the distance go out too fast and either he can’t finish he is giving away lots of time over the last six miles. Then put that on rugged terrain in questionable conditions and you see my point.

The other thing people don’t realize is the muscular strength aspect. People who have transitioned well to trail stuff are road racers who have a little more muscle mass and a little more strength. Super-skinny guys might not have the strength to go up—or more importantly down—the steep stuff and be intact on the other side.

I’m not sure. I’m really fascinated by the longer stuff, but I’m not sure if I’m fascinated by doing it or observing it. I’ve gone to Western States twice to watch or crew. I kind of feel like I need to get to the point where 50 miles doesn’t feel that ridiculously hard before I try something longer.

You’ve shown a lot of talent on both the roads and the trails. Which would you say you’re more focused on?

It definitely goes in waves. After I left Team USA Minnesota I really was focused on trail running. At the end of 2009 and 2010 I did a lot of trail stuff, but this past year I was trying to get ready for the Marathon Trials. Then this spring I’ve been back on the trails. With trails there’s still so much for me to learn.