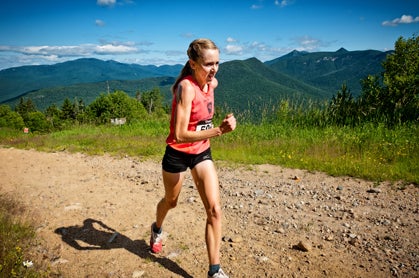 Kim Dobson of Grand Junction, Colorado, is best known for her uphill running prowess, and rightly so. In 2012, the 28-year-old broke the long-standing women’s record at Colorado’s Pikes Peak Ascent, a record set by trail-running legend, Lynn Bjorkland in 1981. To Bjorkland’s previously thought “untouchable” record of 2:33:31, Dobson crossed the line in 2:24:58. Of that performance, she told Trail Runner earlier this year, “Going in to the race I thought it would be possible to run around a 2:30 if I had a strong day. I was not expecting to be around 2:25! That finish taught me to never place limits on what you can achieve in a race.”

Before Pikes, Dobson blew away the competition on Mount Washington. There, she ran the second-fastest women’s time ever, breaking the elusive 1:10 barrier and running a 1:09:25. Then, to top off an already incredible season, Dobson finished third at the World Long Distance Mountain Running Challenge—the Jungfrau Marathon—in Switzerland, earning not only a podium spot, but also earned the second highest points toward Team USA’s Gold-Medal finish.

Dobson took a few minutes to answer some questions about uphill running, her past season, her involvement with the sport and what she hopes to achieve in 2013.

How did you get into mountain running?
Although I didn’t run in college, I did enjoy running recreationally during that time. The mountain running came into place many years after college, probably from the combination of my love of running and the passion I shared with my husband for hiking tall peaks.   I was also fortunate to meet other awesome mountain runners, such as Brandy Erholtz and Scott Elliott who encouraged me and believed in me. After that, I met so many other wonderful people involved with the sport and saw so many gorgeous places that I fell in love with mountain running.

Uphill running is your specialty. Why do you love it?
Whether it’s biking, cross country skiing or running, uphill activities have come naturally to me for as long as I can remember. … It’s just who I am and the way I was made. My family jokes that I can do most things faster uphill than downhill, which is not too far from the truth! For me, the most rewarding part of running uphill is the sense of accomplishment it brings.    My favorite thing about uphill running is the goal-oriented nature of an ascent. Each hill or mountain is different, but the objective is always to reach the top as best or as fast as you can. You have to fight to overcome mental and physical challenges as you climb to your destination. Once you reach the summit, you get to breathe, enjoy the stunning views and cruise back down the mountain.

How do you overcome the mental barriers of the “uphill grind”?
Before I run a hill, I accept that it is going to hurt and remember my goal, which is to always do the best I can do on that day. When I am on a long ascent in an important race or training run, I often recite a Bible verse or a favorite quote in my head. It’s a privilege and a blessing to have the ability to simply run, and I try to remind myself of that as often as possible.

It’s as though you have a “love affair” with Pikes Peak—one that clearly paid off with your impressive win and course record this past year. Tell us more about your relationship with the mountain.
My husband, Corey, and I both share the ‘love affair’ with Pikes. We first ran the race in 2009 with no expectation of how we would do or what it would be like. I remember being in awe of the mountain the entire time I was running. After experiencing the race and meeting awesome people, we were both hooked on mountain running and racing, in particular Pikes. It’s one of the most unique and historic mountain races in the U.S., in my opinion. We have run it each year since 2009.  Going into the race this year, my focus was not on a specific time but rather on running with wisdom and strength.

Best advice for aspiring uphill runners?
Learn to love the pain and challenge of running uphill. Don’t worry about pace or time, just do your best to stay relaxed, stay strong and keep an even pace on an incline. Find other uphill activities you enjoy (such as hiking, stair climbing, or cycling hilly terrain) and do them often to build general strength for uphill running.    How do you give back to the running community?

Recently I have found a new passion in coaching and helping others with their training. Last fall, I had a blast coaching the boys and girls cross country team at Grand Junction High School. I also started helping a few friends train for their goal races. I don’t have a degree in exercise physiology or sports science, but I avidly read running literature and I experiment with my own running. My hope is to give back to the running community by sharing what I have learned and my enthusiasm for running.

What are your plans for 2013?
As of now, I have not yet set a definitive race schedule for 2013. There are too many amazing races and beautiful places to choose from. I will likely return to my favorites (Black Canyon Ascent, Pikes, Mount Washington), try a few new Colorado races and hopefully run something big out-of-state or country. Sometime in the near future I would also like to return to the Jungfrau Marathon, qualify for the U.S. Mountain Running Team, and run the North Face 50-Mile Endurance Challenge Championships, La Luz, the Zermatt Marathon, Mt. Evans Ascent, Imogene, the Pikes Peak Marathon and many more!

Which race stands out the most for you from 2012?
I had a wonderful experience at all of the races I ran in 2012, but Jungfrau was probably the most unique experience of them all. It was my first international race, and the landscape and the race’s excitement blew me away. Being a part of Team USA alongside some great friends also made the experience special.