Jo Meek likes it hot, from Marathon des Sables to the Coastal Challenge 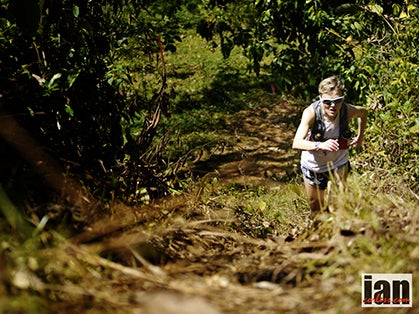 Editor’s Note: This is the first installment of a mini-series on trailrunnermag.com about women running multi-day adventures on the trails.

The eyes tell the story—they look through you. Deep in focus, almost blinkered like a horse, Jo Meek has only one purpose. To run as fast and as efficiently as possible over six days and win the 10th edition of the 2014 The Coastal Challenge (TCC) in Costa Rica.

I had seen this look once before, at the end of stage 1 of the 2013 Marathon des Sables in Morocco. Sitting in a bivouac, Meek, 36, of Fair Oak, New Hampshire, had just excelled on the first day of the race. I, like others, looked around in wonder and asked the question, “Who is Jo Meek?”

Switching from the dunes of the Sahara to the beaches and rainforest of Costa Rica was always going to be a cathartic moment for Meek, particularly when one considered the slated seasoned competition: Julia Bottger, Veronica Bravo and Anna “Frosty” Frost. Unfortunately, Frosty had to withdraw from the race just days before the start. While disappointed at not having the opportunity to test herself against one of the best female mountain-ultrarunners in the world, Meek was unfazed: “It changes nothing. I am here to race and race hard. I would have loved to have Anna push me but you know what? I can push myself pretty hard.”

On day 1 of the TCC, Meek raced like a demon. Despite the Costa Rican heat and humidity, she put 45 minutes into the female competition and set the platform on which to build for an incredible victory.

Back in the UK after a recovery week in Costa Rica, Meek agreed to an interview, in the midst of a move … into a house that she had purchased without seeing! Says Meek, “I was too involved in my training—I had one focus, to be in the best shape for the TCC. I just didn’t have time to go and look at it and convinced myself it would be OK.” 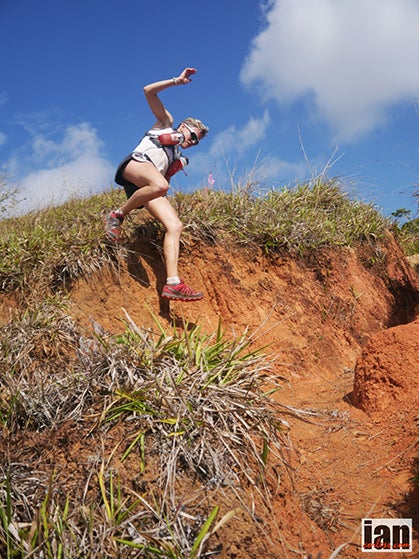 How do you feel after the tough six-day CCC?
I feel complete satisfaction from the race. It’s possible to sometimes come away with question marks but I have none. I put a great amount of dedication into the race and sacrificed lots.

Post MDS you had said you had been a little over cautious. So, did you go to TCC with all guns blazing and take each day as a race?
Yes. I remember listening to Ryan Sandes on Talk Ultra and he said it was amazing how quickly one recovers. I thought, I do recover well and had nothing to lose. So, at TCC I wanted to give it everything. I had prepared for the heat and my training was good.

You have just mentioned that you committed yourself from day 1, when you put 45 minutes into the competition. You have said you spent 10 days training in a heat chamber. Was that a factor?
Yes. I was prepared. I had assumed that the competition would have [also trained in heat chambers]? Accessing a heat chamber is only a case of contacting universities and they are usually willing to help. I assumed some heat work would put me on a par. As it turned out it wasn’t the heat that struck me but the pace!

We were running slower than I expected so I ran at what was comfortable for me and nobody ran with me. I then ran scared thinking I had made a mistake that I was going to pay for.

Can you tell us about the benefits of the heat chamber, and whether there are there any crossovers between MDS and TCC prep?
I did the same sort of training for both races. I followed a classic marathon program but I did more back-to-back runs.

In the heat chamber, you actually don’t have to exercise but it takes longer [to achieve conditioning]. I could sit for three hours or run for one hour.

Regarding your training, what did a peak week look like, say, three to four weeks out from the TCC?
I would do a speed session, a threshold run, a hill session and then long runs that would build to back-to-back runs. I did three back-to-back three-hour runs.

I presume you then eased back on speed and hill work?
I actually kept the sessions. In fact, that week I did a race. You have to remember the long runs were really slow. It was just a case of recovering from a food and nutrition perspective. The runs actually didn’t damage my muscles. I am sensible after each run. I rest. For the three back-to-backs, I took a day off work [as a PT] to make sure I had the best platform from which to build.

How did you break speed sessions down?
You need to target your sessions at the pace you want to achieve and then sometimes faster. I would do some track work running 400s or one-mile reps. We all think: speed, it’s going to hurt. But if you find sessions you enjoy, it makes a big difference. Also try training with others.

So back to the heat chamber, what was day 1 like?
I went in thinking that I would run at “pace” but actually you run at a slow pace so your temperature doesn’t rise too quickly. It feels bearable at the start. [The chamber administrators] monitor the core temperature and mine went too high after 30 minutes so then I had to walk and rest to keep it under control. It’s not physically as hard as you may think. It’s all about core temperature.

By day 3, my resting core had reduced dramatically. It gets easier and easier unless you are a moron like me and fall off the treadmill.

Let’s go back to the day 3 of TCC, when you had Veronica Bravo and Julia Bottger ahead of you. Did you think you were losing the race?
When you can’t see the other runners you immediately think you are losing [lots of time]. However, when it is so technical, you can’t think about anything other than what is below your feet and what is ahead. I just had to follow the course markers and cover the ground as best as I could. All the time I was thinking, I just need to get on the flat or get on a good hill and start chasing and pulling time back.

You got through the section and started to chase. You clawed back the time, you caught Julia and Veronica and then on the final beach section in 100-plus-degree heat you pulled away and got another stage win. How did you feel?
The third day was the longest and most emotional day. Even though we still had three days of racing ahead, I had concentrated so much that I was exhausted.

I didn’t want to take anything for granted. I could have fallen and hurt myself and with Veronica and Julia chasing, I couldn’t be complacent. I raced hard to the end.

What are your tips for multi-day racing?
Assess what you as an individual want from the race and then train accordingly. You must have a goal. Do you want to compete or complete? It makes a big difference. If you get your mind it the right place it is half of the battle. Prepare mentally, don’t be scared of the environment.

Have a great understanding of your body and how it recovers. Without doubt eating after exercise within an hour is key, especially for multi-day racing and training. Rest when you get an opportunity; elevate your legs. For sure your feet and ankles will get tired.

Relax, eat, drink and let everything settle. If you can sleep, do so. It provides great recovery. Ultimately, common sense prevails.

TCC and MDS are very different. At MDS you have to be self-sufficient and carry a pack, whereas at TCC tents and food are provided so you can run light. What are the pros and cons of both races and which did you prefer?
That is very tricky. At TCC with food in abundance, you can eat when you want and as much as you want so that makes recovery easy. However, everyone has that option so it’s not a personal advantage, it’s just a different scenario.

At MDS, if you have planned well and your nutrition is optimum and your competition may have not, this can be something you work into a positive. It’s a game of calories versus weight. I like the challenge of the MDS scenario but your running style must change. It depends if you prefer faster racing or a more expedition type of approach.

Between MDS and TCC, which race was the hardest?
The Coastal Challenge—the course has everything, ascending and descending. The damage it did to my legs was far greater than the MDS. I found the MDS was harder from a food perspective, it took me four to five weeks post MDS to put the weight back on. The Coastal Challenge course tests the body and mind and the continual changes of terrain keep you guessing and working hard.

Ian Corless is a creative director and host of an ultrarunning podcast called Talk Ultra, available every two weeks ‘for free’ on iTunes and talkultra.com. In addition to this, Ian is a photographer, writer, reviewer and blogger at iancorless.com. Ian is currently travelling the world capturing stories from some of the most iconic ultras on the planet.