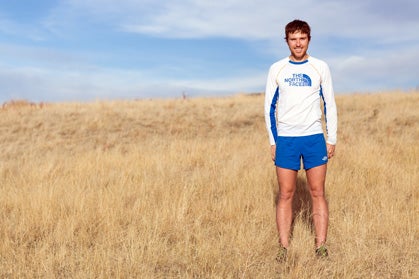 The first time I met mike Foote was in 2011 at a post- race dinner in San Francisco. I didn’t know much about him, except that he had reddish hair and a beard, lived in a yurt and had finished first at the Bear 100-Miler earlier that summer. It wasn’t until a trip to Santiago, Chile, for the Ultra Maraton de Los Andes last fall that I got to know the 29-year-old Missoula, Montana, ultrarunner. We shared a nine-hour flight, a 10-minute plank routine on Dallas airport floors and a weekend of running and overeating in South America.

Foote brings his own hand grinder, fresh-roasted espresso beans and an aero press whenever he travels. And, with his busy schedule that includes a job at the Runner’s Edge store, coaching a high-school cross-country team, directing races and his own training, espresso is something Foote never sacrifices.

Foote stands 5’11” with muscular, mountain-running legs and slightly narrow shoulders. He talks clearly, with an almost teacher-like enunciation, and listens intently, laughing often— a deep belly fling-your-head-back laugh. He makes jokes that fold easily into conversation and winks one of his eyes and smiles regularly at the end of his sentences.

When running comes up in the conversation, Foote speaks enthusiastically about his high-school team first, then launches into the Missoula running scene and the races he directs. Butgetting him to talk about his own running accomplishments and goals takes more prodding.

Says his sister, Rachel, who’s also his world-traveling support crew, “Mike’s just a normal guy with a lot of drive and a big heart. He didn‘t grow up a natural athlete, but has put the time and the work into becoming an elite ultrarunner.”

Most recently, in 2011, Foote was the first American to cross the line of France’s challenging 100-mile Ultra- Trail du Mont-Blanc. And in 2012, he clinched a third- place finish there before stomping the competition in Chile.

Foote wasn’t always a runner, he says, referencing his “typical Midwestern” child- hood that involved baseball and other stadium-spectator sports. But he says he was always “drawn to the woods and the open spaces,” and spent hours outside as a kid, a passion that eventually led him to Missoula in 2004.

Between work, training and getting his yurt ready for the cold Montana winter, Foote answered a few questions:

What is most appealing about running in the mountains?
The feeling of moving efficiently over all types of terrain is cathartic. It’s a partner dance between you and the mountains. It’s giving and taking and finding balance and rhythm.

1. My cross-country runners: I am an assistant coach for Hellgate High School in Missoula, one of the biggest, most competitive running programs in the state. I find inspiration in the kids’ work ethic and pride in watching their success.
2. The ultrarunning community: I am fortunate to have many friends within the running community who are pushing their limits, and steering the direction of the sport. This is exciting to witness. 3. Google Earth: It is scary the time warp you can enter while con- cocting schemes and routes.

You’ve had a successful year racing in 2012. What’s next?
I started running in order to go far into the mountains. Much of my running this year has been focused on training for goal races. Expedition running draws me, too, and I’d love to prioritize crossing new mountain ranges and exploring new places as much as I have prioritized peaking for a 100-miler.

Do you have a pre-race routine?
I drink coffee, eat peanut butter and honey on toast. And if I am lucky, I take lots of trips to the bathroom! Oh, and I sleep in my race shorts.

You live in a yurt?
Yes, I live in a 24-foot yurt on the edge of the Rattlesnake Wilder- ness Area just north of Missoula. My location is ideal for runs out the front door. I can hit a game trail up a ridge for 10 minutes that links me into a great net- work of established trails. I wouldn’t trade it for the world. If I won 100-million dollars, I would probably just upgrade my wood stove and buy some heavier curtains for better insulation in the winter.

If you could be any animal, what would it be?
A Blue Heron: When- ever I see one I stop and watch it. Blue Herons seem patient and wise and sincere, characteristics I am always striving for.

What is the key to running ultras?
You need a high tolerance to adversity, an open mind and short-term memory loss!