Molly Sheridan on picking up running later in life, why 50-milers are more fun than marathons, and her plans to run in Antarctica 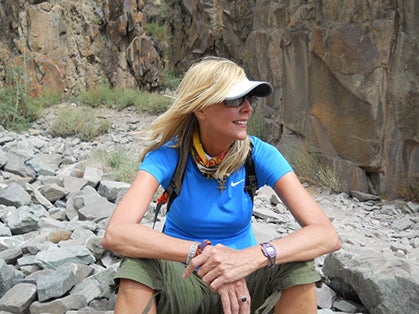 Nearly a decade ago, at age 48, Molly Sheridan was a full-time event planner in Las Vegas, mother of three teenagers and non-athlete who says she “couldn’t imagine running to the end of the block.”  So when a friend invited her to run the Marine Corps Marathon in Washington, D.C., she initially balked. But, eventually, she took up the challenge on her friend’s promise that the event would be “fun.”

Sheridan threw herself into running as her teenage children moved away to college. She progressed from marathons to 50K, 50-mile and 100-mile ultras and multi-day stage races. Since then, she has completed more than 50 ultramarathons, including some of the most grueling races on the planet, like the Badwater Ultramarathon in Death Valley, the multi-day Marathon des Sables in the Sahara Desert, and La Ultra – The High, a 138-mile race in the northern Himalayas that crosses two peaks over 17,000 feet. In 2009, she founded Desert Sky Adventures, a Las Vegas-based racing and adventure company, and just this year, she published a memoir, Running Past Midnight: A Woman’s Ultra-Marathon Adventure.

Here she takes a little time to answer some of our questions about what the past decade has been like.

1. At age 48, you were a non-athlete who hadn’t exercised for as long as you could remember. And then you started training for a marathon. What did the first run feel like?
Oh, it was horrible! I could not imagine at that time how I was going to do one or two miles, much less 26.2. I think the only reason I did hang in there was because I had a friend who was so encouraging and so much fun and I kind of wanted to hang with her, that I stuck with it. But I was terrible! I totally get where people are at when they start. I hear it all the time: “Oh my gosh, why do you like running? It’s so boring, it’s so awful.” Well they just haven’t got past where it’s kind of yucky!

2. How long did the “yucky part” last for you?
For me it lasted weeks. Even now, sometimes when I get up to run, the first 10 or 15 minutes I still feel that yucky part. Then you hang in and within 20 or 25 minutes it’s OK. You go on cruise control and your body’s back. Some people never get past that first 30 minutes and never experience that.

3. Was there a point when you felt like you “got” what running was all about?
When I finished the marathon, I felt like I had accomplished my first goal. That meant something to me. The medal meant something. I’d achieved some sort of a dream. That’s when I wanted to explore it further.

4. Is that what compelled you to register for your first ultra?
You know, when I was training for the marathon I had started reading about ultras. I was fascinated because here I was trying to do 26 miles, and I couldn’t imagine what these guys were doing at 50 miles and on. So I think that was in my head when I was running that marathon. When I crossed the finish line, that little voice in my head said, “I wonder how far I could go?”

5. How did your first ultra go?
I signed up for the Calico Trail Run. It was a 50K. I never thought about finishing. I just wanted to see how far I could go. I never really had any goal other than just having the guts to go out there and try it. Once I was out there, I started grinning and smiling. I was having a ball. It was hard. I fell and I cut both my knees. But I didn’t care. I was digging it.

After the race, I was talking to my daughter on the phone, when I heard someone announcing, “Molly Sheridan…” I got second place in my age group. I told my daughter, “Oh my gosh. I think I just won an award for finishing this thing.”

6. Before running your first 100-mile race, the Rio Del Lago 100-Mile Endurance Run, you felt anxious that you hadn’t prepared enough, as you describe in Running Past Midnight. In retrospect, was there anything you could have done to prepare yourself for running 100 miles?
Not really. I think for the average person, standing and having 100 miles to run in front of them, they’re going to feel like, is it possible for me? Can I make it? So I think the doubts will always be there. What it is is taking the first step and just digging in.

7. Does running 100 miles get easier?
Yeah, it does. Rio del Lago was my first 100-mile race. The next day I felt like, oh my God, I just got hit by a truck. I was really wiped out. I felt great mentally, but I had aches and pains everywhere. And then after I did the Lean Horse 100 in South Dakota in 2008, I had an airline flight the next day and was running through the airport pulling my bags. I stopped and thought, oh my gosh, I ran a hundred miles yesterday and I don’t feel like it! I don’t feel bad at all! That was just because I’d run a lot more, had a lot more experience. So yeah, it does get better. 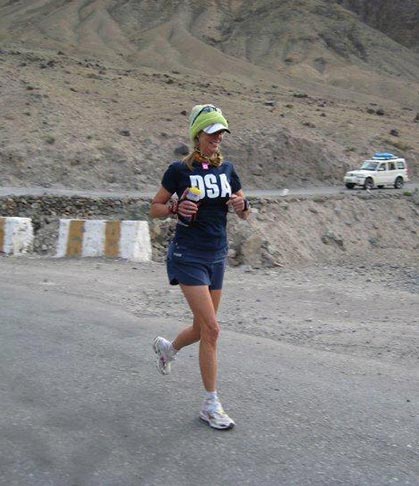 8. When you entered the Marathon des Sables, a seven-day, 150-mile stage race through the Sahara Desert, what did you expect? Were you surprised?
I felt I could do it. I knew it would be a challenge, but I also had some experience with ultradistance, so I felt like OK, every day you do a distance like an 18K or a 20K, and then you do a marathon distance. And they give you a lot of time to do that.

It was so much tougher than I imagined. Everything in the world hit me in that race: the heat and the sand in the shoes and the windstorms. I got dysentery from playing with the children in the streets of Ouarzazate, Morocco. I didn’t realize that they were sick when I was playing with them and giving them food that I brought from the states. On the third day of the race I was so sick with dysentery that I didn’t think I could even stand up, much less run. It was the day that we needed to cover 50 miles. I couldn’t keep anything down. Lynn Hewett an Australian runner in our group, gave me some packets of ginger tea and told me to just keep sipping on it, which I did.

I ended up in a medical tent with dehydration halfway through the night. I was able to get some electrolyte drink mix in me and convinced medical that I could continue, although I threw all that up as soon as I left the aid station. I continued a slow trudge through the desert and eventually the finish line. It was simply the toughest thing I ever did up to that moment. I think that’s when I realized one of my gifts was mental strength, because I just wasn’t ready to throw in the towel.

9. Did that experience prepare you at all for La Ultra – The High, a continuous 138-mile race in the Northern Himalayas?
It did, because in the Sahara Desert, you get dirty and grimy and you’ve only got whatever you’ve brought with you. You don’t have a nice aid station with a whole bunch of food; you don’t have anything other than your survival gear. At The High, we’re in the middle of nowhere on the border of China and Pakistan, and even though you have your crew there helping you, you’re still kind of limited with what you can actually use out there. The Sahara experience really helped with not having a lot of comforts – you get uncomfortable, and dealing with it is part of what you have to do when you’re out there.

10. Do you feel you have a distinct perspective on running or ultrarunning because you joined the sport later?
Yeah, I think my perspective is that a 50-miler is easier to do than a marathon. At a marathon, everyone’s trying to run as fast as they can to get a time. They’re trying to do a sub-2:30 or three-hour race. I think it takes a lot of fun out of running. The average person gets caught up thinking they need to do a really fast time when they don’t. A 50-mile race forces you to go slower and enjoy it more. Speed was never my gift, but I enjoy that distance. You have more time out there, you’re in nature, and chances are you’re on some gorgeous trail somewhere.

11. What’s your favorite trail?
My favorite trail – I’m on it every week – is Red Rock Canyon. It’s called White Rock Loop in Red Rock National Park right here on the west side of Las Vegas. It’s gorgeous, pristine, beautiful. One of the eight wonders of the world!

We have a really cool trail race out there. We work with the firefighters here, Wildland Firefighter Awareness Group, and we do a race every May that benefits all the firefighters who have lost their lives.

12. Do you have any advice for runners who are starting out in middle age?
Yeah, just make it fun! Get out there and start moving. Ease into it. I always encourage people to email me if they’re just starting out and they’re freaking out. Nothing should hurt.

Our bodies can do so much more than we ever give them credit for. People don’t know that until they push it a little bit and get out there and see how their bodies adapt.

13. What’s your next adventure?
I want to get into Western States next year. I have never done that and I’ve always wanted to. There’s also a race in Denmark that I want to do in May next year. My big, pie-in-the-sky goal, whenever I get funding, is to run 100 miles in Antarctica. I don’t think it’s ever been done by a woman, and I would really like to do that.