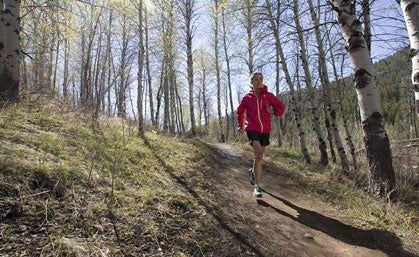 Morgan Arritola lives in a trail runner’s paradise: trailheads lie just outside her door in Ketchum, Idaho, where she works for Scott USA.

“I can leave my door and be on trails in five minutes and run for three or four hours, easily. It’s pretty nice,” she says.

Apparently her location is paying dividends. Arritola, who is also sponsored by Scott, won the highly competitive Dirty Half Marathon in Bend, Oregon, last year in 1:24:34, where she had placed second the year before. Last September, she won the XTERRA Trail Run National Championship 21K in Ogden, Utah, in 1:29:09, and went on the win the XTERRA World Championshop 21K in Hawaii in December with a time of 1:33:00. Last weekend, she won the Vail Pass Half Marathon at the Teva Mountain Games in Vail, Colorado, in a time of 1:37:44.

Despite her successes, Arritola is far from rigid with her training. “I don’t keep track of miles per week,” she says. “I don’t have a coach, don’t have a plan. I just do what I feel like I should do.”

This approach could be attributed to the fact that, until recently, she only raced on the trails when she could fit it in between training full time with the U.S. Nordic Ski Team – a team Arritola competed on at the 2010 Winter Olympics in Vancouver. The training there was so rigid, she says, that she needed to change things – including taking a hiatus from skiing.

“I don’t overthink things,” she says.

When she toes the line at New Hampshire’s Loon Mountain Race on July 8, she will be a force to be reckoned with. There, the top four American women will qualify for the 2012 Women’s U.S. Mountain Running Team and will travel to the World Mountain Running Championships in Italy in September. We caught up with Arritola to discuss her chances, her approach to running and her time as a skier. 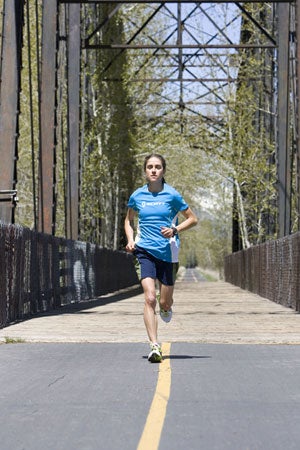 Which came first–skiing or running?
I was actually a soccer player first. I was born in Oregon and grew up playing soccer until we moved to Idaho. We moved to a place where there was a cross-country ski team, and I’d never done that before. But I ended up on the team.

Since then, skiing has been your main sport. What have been some highlights in your skiing career?
I was a three-time junior national champion. I was on the U.S. Ski Team for five years and went to a bunch of world championship events and the 2010 Olympics. In Vancouver I raced in three distance events and a relay, but I didn’t ski well. Obviously you want to go to the Olympics and ski your best races, but that’s not a reality for everyone.

How have you transitioned into trail running?
Well, I’ve always run, but only recently started doing races the last few years. I prefer trails.

How have you fit running in with your ski training?
Running is not only a good replacement, it’s effective training for skiing. You’re putting on a bib and running hard. We always do running intervals for ski training, and some cross-country skiers are not as inclined to run. Some people get injured more easily.

Going forward, which sport will be your focus?
I’m changing things up, trying to make a little money and have a real job. It was a long five years, training full-time to ski. I probably won’t go back to it – being a full-time athlete is a sweet gig if you can make it work, but it’s a financial strain.

When I skied I kept a training log, and kept track of hours. With running I don’t keep track of miles per week.

What are your racing plans this year?
I’ll do Loon Mountain and I’m trying to get into Pikes Peak. I may try to finish my season at 50K Nationals in Bend. I’ll see what kind of shape I’m in.

Was the chance to qualify for the U.S. Mountain Running Team the reason you chose to run Loon Mountain?
I wanted to do Loon anyway, but the chance to qualify is definitely the motivating factor. That said, I don’t know what my chances are. I don’t really think about it too much. Whereas my day used to center around training, now it’s just something I try to fit in when and where I can. If I’m in good shape when I get there, I expect I could qualify, but it’s hard to tell.

What are your running plans beyond this year?
I don’t know about running plans. I just kind of fly by the seat of my pants. If something happens and I end up running more, then that would be awesome.