Mike Wolfe’s stellar 2011 included a runner-up performance at the Western States 100. Saturday, he will toe the line again, looking to improve on that finish. 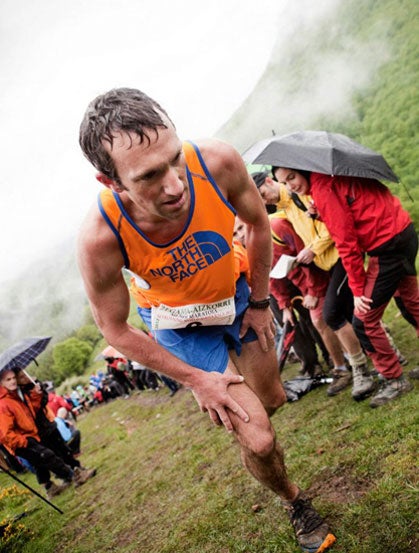 Photo by Jordi Sargossa – Wolfe leaning hard into a tough climb at the Zegama-Aizkorri Marathon in Spain this Spring.

“I never raced track or cross-country growing up. I was an avid soccer player from an early age,” says Wolfe, 34, whose first stab at competitive running came during the 20-mile Bridger Ridge Run in the mountains outside Bozeman, Montana, the summer he graduated from high school. “I went on some mountain training runs and really liked it. So, on a whim, I jumped in the race. … I wore a cotton T-shirt, bought shorts at the Salvation Army and borrowed a buddy’s pair of Nike racing flats.”

Wolfe, who in April quit his job as an Assistant U.S. Attorney in Helena, Montana, and moved to Missoula to focus on running, has come a long way since that first race. At last year’s Western States, he finished second in an extremely competitive field, only 4 minutes 4 seconds behind winner Kilian Jornet.

This Saturday, he will again toe the line in Squaw Valley, looking to improve that finish. And with the recent withdrawal of Jornet, Wolfe is the highest returning finisher in this year’s field.

“[I want] to have fun and enjoy racing hard,” he says of his goals for the race. “I want to explore what I am capable of, and at least go down swinging!”

Changing Direction
Wolfe says leaving his legal career has not yet had a big impact on his training, as he has not settled into the routine of being an athlete full-time. He does say, though, that he will be able to look forward to “less stress, more rest and hopefully smarter training.”

“This spring I have put in a bit more volume in my training,” he says. “But I raced less, compared to last year. So, I’m not sure how that will shake out.”

Wolfe says the level of competition at Western States—as well as the race’s history—is what drew him to run it last year. And while he was aiming to finish high, even he was surprised at the result.

“I ran the first half with a crew of guys—Hal [Koerner], Geoff [Roes], Nick [Clark], Tim Olsen, Kilian,” he says, recounting the 2011 race. “Kilian and I put a couple minutes on the other guys between 30 and 50 miles and the two of us ran together. I hit a bad patch at 55 to 60, and dropped off and was passed by Kilian, Jez [Bragg], Nick and Hal. I rallied hard from 62 to 100 miles and passed everyone but Kilian.”

“I went in with the goal of a top-5 finish but didn’t expect to place second,” he says. “I gave it everything I had.”

Now, Wolfe says he hopes that experience will help him at Western this weekend after what he calls disappointing performances so far this year. In May, he finished 14th at both the Transvulcania Ultramarathon and Zegama-Aizkorri Marathon, both in Spain. In March, he finished 13th at the Chuckanut 50K in Bellingham, Washington.

“Looking back, I think I went in exhausted,” he says of those races. “I trained really hard leading up to Transvulcania, but I was also trying to wrap up my job in the U.S. Attorney’s Office, and moving. It all took a toll.”

He continues, “I rested after Zegama, and then got a real solid block of training in. I hope I am where I need to be for the weekend.”