Army vet and ultrarunner Mike Ehredt on running, gratitude and seeing the U.S. one step at a time 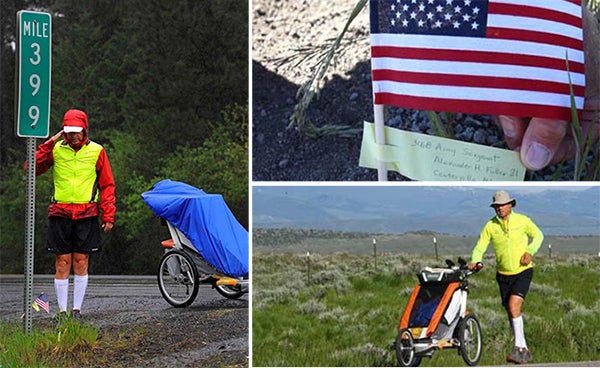 In 2010, Mike Ehredt, a retired Postal Service employee and Army veteran, set off on a cross-country journey he called Project America Run. Starting in Oregon and ending in Maine, he planted a flag after each of the 4,424 miles he ran, one for every U.S. service member killed in Iraq since 2003. Two years later, he ran 2,146 miles, from the Canadian border to Galveston, Texas, doing the same for casualties of the war in Afghanistan, ending on Veteran’s Day. Over the two runs, he averaged 29 miles a day.

Ehredt, now 53, has been running since he was a sixth-grader, when someone bet him a dollar he couldn’t run a mile around the schoolyard. He did, and turned into an avid runner, biker and triathlete. About a decade ago, he began running ultras. He has run the Hardrock 100 twice—in 2008, he bagged the “Rocky Mountain Slam”: Hardrock, the Wasatch Front 100, the Bear 100 and the Bighorn 100—and is a two-time finisher of the Marathon des Sables, a 150-mile stage race in the Sahara Desert.

Ehredt, who lives in Hope, Idaho, leads an active retirement. In addition to running, he gives talks, coaches online and works as a personal trainer at a local gym. He also encourages road runners to hit the trails. “When they do, they don’t want to go back” to road running, he says. “They get some form of clarity when they get their feet dirty.”

Here, Ehredt takes a moment to talk to Trail Runner about Project America Run, seeing America on foot and what lies ahead.

1. How did you get into trail running?

I was in the Army from 1979 to 1983, as a combat engineer. That’s when I had my first taste of trail running, being stationed in Germany and running trails over there. It was a place in southern Germany called Garmisch. It’s quite mountainous, on the border with Austria, right at the beginning of the Alps.

2. So you were mountain running over there?

I was. [My running partners and I] didn’t even know what it was called. We knew we weren’t walking or hiking, and we knew our running was pretty slow, but it was a totally different concept back then. Everybody hiked. Nobody ran trails. So when we went running by, we were kind of an anomaly, especially being American over there. I think we were probably the only ones who ran.

3. What was the inspiration for Project America Run?

I think that saying “thank you” has become, in a sense, watered down. And I didn’t feel my commitment and obligation was complete. I wanted to do something more concrete and personal to show my gratitude, and I wanted it to be unique.

4. There have to be easier ways to honor fallen soldiers. Why running specifically?

To me it was a grand adventure, like doing a thru-hike on the Appalachian Trail. I chose to run because it was the one thing that I had done my whole life, that I knew I could do. It was the simplest thing, movement at its purest form.

5. Were you out there alone most of the time?

I was. I didn’t have a support vehicle following me or anything. I pushed a stroller, I had all my flags in there. It was a two-year planning process to get it together. And the only thing I relied on was families that would take me in for the night. They were prearranged a year in advance. I had never met them. That said a lot for people in the country: opening their doors to a guy who was planting flags. 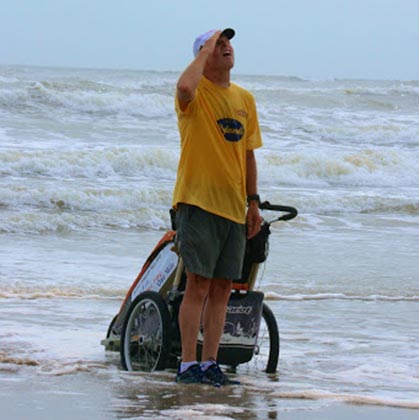 6. What was the most memorable moment from Project America Run?

[In 2010, during the first run] I was outside Craig, Colorado. There was a car sitting along the road. It was a mother from Alabama who knew that I was planting her son’s flag that day, and she drove 27 hours straight through to be there when I did it. She said that she wanted to be there for him, and that her biggest worry was that her son would be forgotten. The gratitude that she showed, and that love for her son, was overwhelming.

7. Were you publicizing Project America Run online so other people could follow your progress?

I had a website and a SPOT beacon, so people got wind of it. But I’m not a real attention type of guy. I didn’t want to go and say, “Hey, it’s about me.” So there wasn’t a whole lot of awareness about it. To a lot of people, I was just a crazy-ass guy pushing a stroller and putting a flag in the ground. They never really knew what was going on.

Most of the time, to be honest, people couldn’t comprehend it. They’d say, “Hey what are you doing?”

I’d say, “I started running a couple months ago. I’m going to Maine.”

“What kind of bike you riding?”

“Seriously? Does it look like a bike? It’s a stroller!”

“Oh, how long you been walking?”

In the Midwest especially, in the middle of the summer, helicopter moms would drive by, out in the middle of the boondocks, and think I had a baby in the stroller when it’s 110 degrees out. They’d call the state police, and they would come out and check on me: “You got a kid in there?”

8. Were there people who tried to project some kind of agenda onto Project America Run or interpret it as political?

Media. Papers would always fish: “What’s your angle, Mike? What’re you up to?”

“Come on, there’s gotta be more than that!”

I always said I wouldn’t taint the purity of what I was doing by going into an arena that I didn’t really know about. It wasn’t about that. I could very well have been putting flags down for Korea, World War II, Vietnam, whatever. I had no connection to anyone in either of the conflicts. I didn’t know any of the fatalities.

In 2013, I went to Tanzania. A group of five of us became the second group to circumnavigate Mount Kilimanjaro on trail, running. That took us about six days. Running around Mount Kilimanjaro was much more appealing to me than just going straight up and straight down. This year, I completed my second Hardrock.

Between the two [Project America Run] runs, in 2011, I ran across Spain on the Camino de Santiago, the pilgrim’s route. That was cool: running across Spain, super-light, partially on trails.

10. How do you plan to honor Veterans Day this year?

I’ll be in California, at a small veterans’ community giving a talk.

I’m also involved with Team Red, White & Blue. It connects communities and vets to physical activity, so we’re all runners. We have a huge trail-running camp west of San Antonio next weekend. It’s kind of a who’s who of trail running: Max King’s gonna be there, Meghan Arbogast, Pam Smith.

I’m a mentor [at the camp]. We have 100 vets coming in who are all runners, and then we have another 100 people and about 40 mentors. We have little clinics that you run to. It’ll be a couple miles on a trail, and we talk about hydration, technical uphill and downhill, nutrition, safety.

I’m the keynote speaker on Saturday night. I give a talk entitled “12 Million Steps,” which covers gratitude, inspiration and perseverance. And a little bit of grit, which I think all trail runners need at some point. When the talent leaves us, that’s all we’ve got left, is grit.