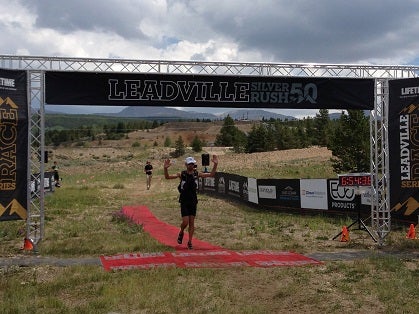 Michael Aish typically expects to be at or near the front of almost any race he enters—and with good reason. The former Division II All-American from powerhouse Western State Colorado University in Gunnison, Colorado, boasts personal bests of 13:22 in the 5K and 27:46 in 10K, and has twice represented New Zealand in the Olympics.

Despite fast track success, Aish has a healthy respect for the 100-mile distance, which he will attempt for the first time this weekend (August 18-19) at the Leadville Trail 100 in Leadville, Colorado.

“When I mention I’m running Leadville, friends seem to think I’m going to break a course record and win easily,” he says. “But ultrarunning is a whole different sport.”

Aish, 36, has tinkered with his training routine, logging runs of three-plus hours twice a week near his home outside Denver in preparation for the new challenge. Depending on how he fares at Leadville, he may lay to rest—or further fuel—the debate over how talented road and track athletes would rank among elite ultrarunners in the nation’s most grueling and competitive 100-milers.

He received some positive feedback on his preparations in July, when he won Leadville’s Silver Rush 50 Mile in 6:54:34 on a course extended by 1.25 miles (Gunnison, Colorado, ultrarunner and two-time Leadville 100 winner Duncan Callahan holds the original course record of 6:50:55, set in 2010). We caught up with Aish to discuss his decision to jump up in distance, his training methods and his goals for the race.

What is your running background, and how did you end up in the United States?
I started running at about age 16 with a group of older runners that schooled me along. I enjoyed the sport for the purpose of just being out there, just running. I grew up in a farming community, New Plymouth [in Taranaki, on New Zealand’s west coast], so I was always in the fields or on the trails anyway.

One thing led to another, and I finished high school, and didn’t really have anything going on. I ended up accepting a scholarship to run in the States. At the time, my running was going OK. I had five or six Division I offers and one Division II. That was Western State, and they had the best art program, which was what I was looking for. I ended up going there and loving the place, and my body seemed to work well with the altitude.

What was your running like after college?
I landed a contract with Nike. I ran officially with them for several years before I retired. I qualified for the 10K in the Sydney Olympics, and competed in the 5K in Athens in 2004. For the 2008 Olympics in Beijing, I qualified in both the 10K and the marathon, but New Zealand didn’t send a marathon team that year, so I just decided not to go altogether.

After my contract ended with Nike, I had a job at a local running store, and phased out of running, especially this last year. The focus was moving on with life, getting a job and being able to pay my bills.

Why did you decide to attempt Leadville? Was it a desire to return to serious competition at a different distance, or was it just the idea of a new challenge?
Living in Colorado, the Leadville 100 is like the race you’ve got to do. When you say you’re a runner here, people ask if you’ve done Leadville. So it’s always been on my bucket list.

After about six months of not really running, I grew itchy to compete. I didn’t have a lot of goals. I was walking the dogs up in the hills one day and thought, I’m going to see if I can get into Leadville. I

What is different, or the same, as when you were training for shorter road and track races?
To be honest, I have no idea what I’m doing. Basically, I wanted to bring a little bit of marathon training into it and see what I could so. I had all these great plans, but working a lot at the running store got in the way sometimes.I’ve been running about five days a week, with one or two days that are a little bit longer. Sometimes I’ve run to work—it’s about 30 road miles—at 6:30 or 6:45 pace the whole way, so close enough to a tempo run.

I probably average about 12 miles per day, and get in a three or three-and-a-half hour run once or twice a week. Some guys factor in hiking but what I’m doing is all running. The 50 was good enough to show me that I must be doing well.

Since Leadville is primarily on trails, have you incorporated more training on trails?
I’ve always run on the trails. It’s nothing new to me. Now I’m just spending a little more time on them.

You said the 50 indicated your training was working—how did that race go?
My whole goal going in was just to take it very easy. I really had no idea, and I’m still kind of guessing at what I’m doing. The race went pretty well, and I got a little itchy in the middle and it took a lot to pull myself back, remind myself I had a long way to go and that it was still new territory for me. The last few miles I jogged, walked and tried to avoid blowing myself apart.

What are your expectations for the 100? Do you think being an elite marathoner will set you up well for this race?
To be honest, the marathon is one of my worst events. I’ve run about a 2:13, and I think my track times should have transitioned into something a lot better.

I’m a competitive person so I always go into a race with that mindset. At the same time, my main goal is to get to the finish line, in one piece, running. That last part is key. If I’m blown apart I probably won’t be as happy.

I’ll follow my personal view of racing, which is that I’m going to go out with the leaders and hold on as long as I can. I recognize this is supposed to be a great field, and this is what those guys do. I’m not under the impression I’m going to go out and boss them around. I’m just looking to hang on, and if I’m feeling good and in a good position late, sure I’ll try and take it. But for now, I’m just going to see what I can do, beat as many people as I can and not beat myself to pieces. I’m looking forward to it … but I’m kind of scared.