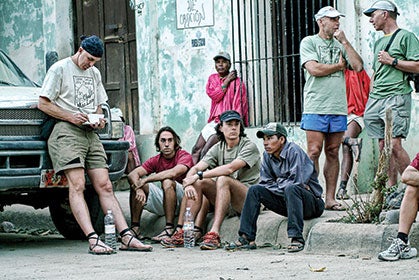 Last week, Deadline reported that actor Matthew McConaughey would be starring in an upcoming movie based on Christopher McDougall’s 2009 bestseller, Born to Run. The book documents a 2006 race in Mexico’s Copper Canyon between top U.S. ultrarunners and the local Tarahumara people, famous for running days on end in homemade sandals.

Born to Run has been credited with fueling the barefoot-running craze and inspiring more Americans to take up trail running. Micah True, also known as Caballo Blanco, an ultrarunner who organized the Copper Canyon race and featured heavily in the book, became something of a cult hero following its publication. (True passed away in 2012.) With McConaughey’s star power and a big-screen audience, it’s entirely possible that the movie will have a similar—if not amplified—effect.

Curious what the individuals McDougall wrote about think of all this, Trail Runner asked two of the runners who were in Copper Canyon in 2006, “Barefoot Ted” McDonald and Luis Escobar, and True’s girlfriend, Maria Walton, for their initial reactions. Here, they share a few thoughts about the film and McConaughey’s casting.

1. Have you been involved with the film at all?

Barefoot Ted: Not officially. Naturally, I have always been a little bit more “in the loop” over the years because of my friendship with McDougall. I do remember a question, something like: “The actor playing your role might like to spend a month hanging out to learn your character. Would that be okay?” My reply: “That would be totally cool, yo!”

Luis Escobar: There have been various screenwriters and actors involved with past attempts at this project. Over the years, I have been interviewed several times. However, this is the first I have heard about this particular production and I have not been involved but I would like to be.

Maria Walton: At this time, I have not been contacted regarding the Hollywood film project, although I am truly thankful of Christopher McDougall’s gracious support of “Run Free.” [Ed. Note: “Run Free” is an independent documentary about Micah True produced by Walton and filmmaker Sterling Noren.]

BFT: Dude! I had not really been a movie buff, so back in 2010 when I first heard his name mentioned, I did not clearly know who he was. At that time, it was suggested he might be playing BFT, so I did some research and thought, “That dude’s cool!”

Over the last several years I have seen him in many other films. Now I am simply blown away by his ability to become one with his character and create some great films. Honored to have him [as] part of the Born to Run film.

LE: It’s exciting to think that a personality of his caliber would be involved with this story. I was there in 2006, and I have watched the impact of Chris’s book and Micah’s message on the running community. The Born To Run story is genuine and McConaughey is the real deal. His participation will reignite the passion.

MW: My first reaction to Matthew McConaughey being cast in the film was that of pure excitement! I quickly recalled an amusing moment with Micah. In November of 2009, while Micah was at a speaking event in Austin, he was at a boxing gym with the mayor, throwing fists against a bag. We were talking about celebrity athletes from Texas. Micah commented that he could see Matthew playing a young Caballo, as a boxer and runner. (And that he’d love to run the trails and hang out with Willie Nelson.)

3. Who would you wish to play yourself in the film?

LE: From the first time I spoke with Micah in 2005, his primary concern was for the Tarahumara people. If and when this film is made, I hope that everyone involved will remember Micah’s dream of respect, sharing and helping others.

4. Do you think McConaughey would be a good fit to play True? Are there any other actors you could see in that role?

MW: Matthew is an incredibly talented and diverse actor. Having an Academy Award-winning actor involved in the screen adaptation of Chris’s best-selling book is a testament to this beautiful story. While Micah was living, he admired the works of actors like Terry O’Quinn, Jeff Bridges, Bill Paxton, Woody Harrelson, Ed Harris and Viggo Mortensen. He believed these actors could play him, depending on his moods, although Micah often commented that no one could truly capture his spirit.

5. Any other thoughts on the film?

BFT: In the end, the film tells a beautiful story that has inspired people all over the world. The message to me is simple: If you are a human being, rejoice, you were not born broken by default or design. If you free yourself up and move about, you will find health and happiness is close at hand. Regain connection to the ancient technology that embodies you, remember its history and robustness and go out there and adventure with your fellow humans all over the world. Who wouldn’t want to tell this story?

MW: Chris’s book brought an excitement to the running community that has never been duplicated. Micah’s simple message from this story was to simply “run free” amidst the beauty of Mother Earth. He hoped to always honor and respect the running traditions of our Tarahumara brothers and sisters. We are a united, universal family of running people, creating peace.

LE: If I could say one thing to Matthew McConaughey, it would be this: “Dude, this is not a story about running.”