Former Marine uses her toughness to take on ultra challenges 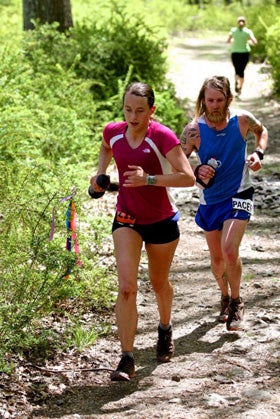 Ashley Moyer and her boyfriend, David Lister, racing to the finish at the North Face 50-miler in Bear Mountain, New York. Photo courtesy of The North Face Endurance Challenge

Just six months after Ashley Moyer, 25, of Lock Haven, Pennsylvania, finished her five-year stint in the Marines, she ran her first 100-miler. To her surprise, she took second place in the 2011 Oil Creek 100-miler in Titusville, Pennsylvania, with a time of 24:15:55. Just a couple years later, Moyer has rocketed to being a rising star in the Northeast trail-racing scene, setting female course records in all seven ultras she has run. In 2012, she returned to Oil Creek, dropping her time to a record 19:29:25.

“Ashley is not close to peaking!” says Pennsylvania’s Megatransect race director Dave Hunter, 56, of Lock Haven, Pennsylvania. “She is one of the best athletes I have ever met. Mid-race, she always looks like she just jumped in and her stride appears effortless. She shows up, wins and disappears off the radar until the next race.” At the 2012 26-mile Megatransect, Moyer took top female honors, setting a course record of 4:53:01.

In June, Moyer smoked Manitou’s Revenge, a rugged 56-miler through the Catskills near Windham, New York (13:32:08) and in May, took down the course record in the North Face 50-miler in Bear Mountain, New York (9:01:53). In October she is running in the Oil Creek 100-miler for the third time, and hopes to break 19 hours.

But it was a convoluted path that Moyer took to competitive trail running. After high school, she joined the Marine Corps with the hopes of gaining life experience and travel opportunities. “I had grown up in a small town and felt sheltered,” says Moyer. “I needed to get out of my shell and explore the world.”

While no one else in her family had military experience, her brother, Kyle, joined the Army a year before she signed on. Though never deployed to any combat zones, Moyer was able to travel to Italy, Ireland, France, Saudia Arabia, Romania, Singapore and throughout the States during her tenure. 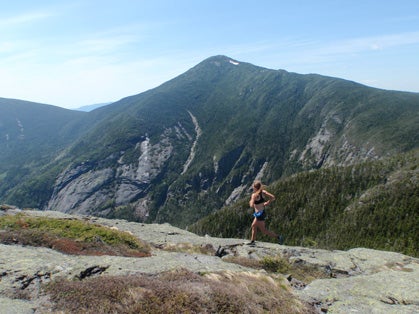 Growing up, she had run recreationally and decided to run her first marathon in 2009—the Marine Corps Marathon in Washington, DC.  “It’s funny to think back to that race. At the starting line, 26.2 miles sounded ridiculously far. The last six miles felt like a lifetime,” she says. “Back then I never dreamed of running farther. Now I think it’d be fun to train for a marathon again some day and see what I could run now that the distance isn’t as daunting.”  Shortly afterward, she ran her first trail race—the Hyner View Trail Challenge in Hyner, Pennsylvania. Her boyfriend, David Lister, whom she met in the Marines, ran it with her.

“We were both instantly hooked,” she says. “After that, we wanted to discover new trails and run farther and longer.”

Moyer has always loved the outdoors. When she was 14, she began working on a horse farm. “Whenever I got the chance, I’d go out for a trail ride in the woods. There was nothing more fun than flying through the woods on the back of a horse, jumping fallen trees, galloping through a field.”

This summer, Moyer and Lister plan to spend several weeks in Colorado, visiting the trail Meccas of Boulder and Leadville. They also plan to stop in Telluride to volunteer at Dakota Jones’ new race, the Telluride Mountain Run [see Making Tracks, July 2013, Issue 89].

“David and I have never run at altitude and want to see if we can handle it,” says Moyer. “We plan on seeing as many trails and mountains as possible!”

After her contract was up for the Marines, she decided to attend Lock Haven University in Lock Haven, Pennsylvania. Currently a sophomore, she is majoring in Outdoor Recreation Management.

“Part of my love for trail running is in exploring new places and seeing new sights,” she says. “Favorite trails? Always mountain trails. It’s not as fun if you aren’t going up and down.”

You can visit Moyer’s blog at www.ashleymoyer.blogspot.com/ 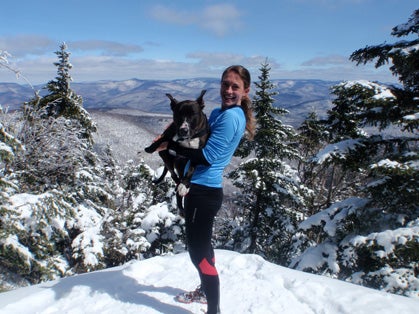 Moyer and her dog Reisling on Panther Mountain, one of Catskill High Peaks in New York. Photo courtesy of Ashley Moyer

Q & A with Ashley Moyer

What are some of the hardest challenges you’ve faced in races?

In my first 100-mile race, Oil Creek in 2011, I was really unprepared. The farthest I’d run before was 50 miles, that being a fast course that I did it in just over seven hours. Around 70 miles in, I started falling apart. My knee and foot hurt, I couldn’t run the downs and I was in a lot of pain. I couldn’t have overcome it with out my crew and pacer, David, and his dad, Jeff.

Then, last fall, in the Labor Pains 12-Hour Endurance Run, a team trail race, I ran with David, I was refueling at the aid station before my next five-mile loop. I took a bite out of a banana and got stung by a bee on the inside of my lower lip! It swelled up; I tried holding ice on it for a while, but then David came in and I had to run again. I could hardly eat or drink, and was really uncomfortable, but it eventually went away and we went on to run 90 miles total in just under 12 hours.

What is your most memorable race?

Last fall’s Oil Creek 100-miler. I went back because I knew I could better my first time. The experience was unforgettable, chasing the clock and running through the finish line almost five hours faster then I had before. Also, the Hyner 50K will always hold a special place in my heart, as it was my first trail race and I’ve gone back every year since. It’s a great course, challenging, and by now I feel like I know everyone there!

The race I just ran, Manitou’s Revenge, rose pretty quickly to the top of my list because I love the Catskills, and they put together a ridiculously tough course on some amazing trails. At the moment I seem to have a desire to run the nastiest, most difficult races I can find, and this one fit the bill.

Have you always been fast?

I didn’t run cross-country or track, but when I was in the Marines, I was mostly faster than the other women in drills. When I started running trails, I was pretty close to the top, and ramped up my training and became more competitive. I really want to see how I would do against some of the faster women in trail running.

Do you believe running to be more mental or physical?

There are so many highs and lows, but I feel like it’s a strong mental component that matters at the end of the race. My legs might be tired, and I’m ready to be done, but I’ve always found energy to finish strong.

What about trail running inspires most?

During tough mental or physical race bouts, it has been the trail-running community that keeps me going. I’ve met so many awesome people through the sport. Everyone is so fun, loving and encouraging. I know that no matter how far I am behind or ahead, I have a community of runners there to support me.

My training is a mix of trails and roads—trails as much as I can get to them. I live a few miles from some great Pennsylvania trails, and run them as often as I can. I used to track mileage, and be concerned about numbers, but this year I got away from that and focused on more quality workouts, especially back-to-back long days.

My favorite Pennsylvania trail is the Mid State Trail, which traverses some remote areas. I’ve done countless runs on it without seeing a single person.

What are your upcoming goal races?

I don’t have many race plans because of being focused on my Colorado trip, but my biggest goal is the Oil Creek 100. I’d really like to come close to the male course record.

Which trail runners do you look up to?

I look up to Ann Trason. She dominated the field back in her day, and many of her records still stand, which is impressive because of how competitive ultrarunning has become. I also admire Dakota Jones. He brings such a positive energy and enthusiasm to the sport while always cracking jokes about his peers.