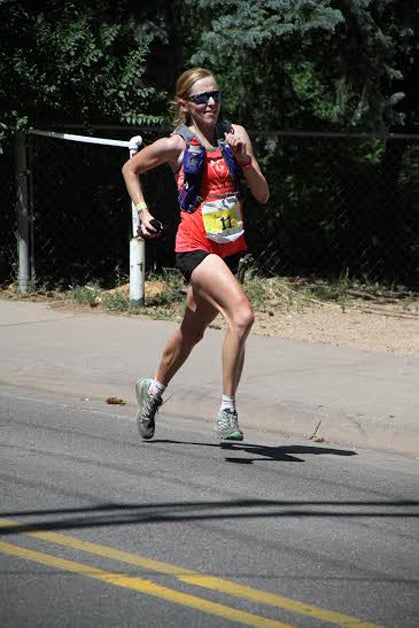 Kim Dobson en route to a third-place finish at Sunday’s Pikes Peak Marathon and the fastest combined time for the Ascent/Marathon “Double.” Photo by Jesse Sommer

At Saturday’s Pikes Peak Ascent – a 13.3-mile race that starts at the base of the mountain in Manitou Springs, Colorado, and climbs over 7,800 feet to finish near its 14,110-foot summit – Dobson, 31, of Eagle, Colorado, simply ran away from the rest of the field, finishing almost 11 minutes ahead of runner-up Brandy Erholz.

But Dobson, who set the Ascent record in 2012, wasn’t done for the weekend. On Sunday, she ran the Pikes Peak Marathon, in which competitors complete that same ascent before turning around and descending back to the base. Running, as she says, “slow on the descent,” Dobson placed third, with the fastest combined time of any woman who completed the daunting Pikes Peak Double.

We caught up with the four-time Ascent winner and new mother to ask about her first crack at the marathon, her strategy for tackling the double, and what the Pikes Peak races mean to her.

When did you first run the Pikes Peak races? Why?

The race was such an incredible experience that we have been back every year since 2009, with the exception of 2014 when my son was born.

This was your first try at the marathon, though?

I ran my first Pikes Peak Marathon this year and placed third. I was slow on the descent, but I had a blast!

That means this was also your first year doubling. How did you decide to tackle that?

It was something of a last-minute, impulsive decision spurred on by my husband’s suggestion. (Thank you, Corey!) The double was a way to challenge myself with something new while also adding a fresh twist to the weekend.

Recognizing that you didn’t know you were racing the double until recently, did you do anything specific with your training to prepare for the back-to-back races?

Several of my harder training runs happened to be on back-to-back days this summer for logistical reasons, which in the end helped my endurance for the double.

Did you do anything specific to help your recovery between the races?

I made an effort to eat and drink a lot after Saturday’s descent. I also got an awesome recovery massage.

Obviously the Pikes Peak races mean a lot to you since you run them every year. You live far enough away, in Eagle, that it’s not quite a “hometown” race – what is it that keeps you coming back?

Pikes Peak is something of a mountain-running holiday for my family and me. It’s a time when friends and fellow runners gather to race and cheer one another on. The course also suits my favorite type of running: long, grinding climbs at altitude.