Why Peter Bakwin holds the key to all trail records

Long-time trail runner, Peter Bakwin, 49, of Boulder, Colorado, is best known as the man behind the trail-running speed record website, … 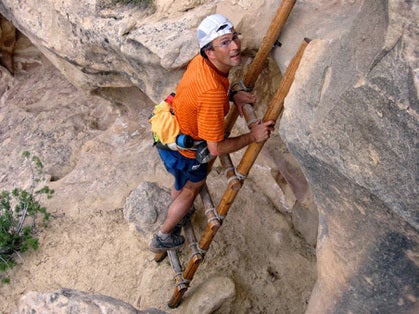 Long-time trail runner, Peter Bakwin, 49, of Boulder, Colorado, is best known as the man behind the trail-running speed record website, Fastest Known Time, a clearinghouse of sorts, for all long-distance trail-record attempts. But how did he become the keeper of these records?

It was in 1999, while planning his own speed-record attempt with legendary adventurer Buzz Burrell of Boulder, Colorado, for California’s 222-mile John Muir Trail (JMT), that Bakwin first realized the need for a single repository of such information. Says Bakwin, “I spent a bunch of time researching the existing records and found that they were fuzzy.” So in 2005, he launched the Fastest Known Time website—the only website devoted entirely to trail speed records.

The site includes over 200 records, a few of which Bakwin set himself, including the first sub-four-day traverse of the rugged JMT. “He’s never been very interested in cranking out miles around a track or following markings in a trail race,” says his wife, Stephanie Ehret, an accomplished ultrarunner (she is a former 100-mile National Champion) and founding member of the orginal Montrail/Patagonia Ultrarunning Team.

In 2006, he set the speed record for Utah’s 100-mile White Rim Trail, which he completed in 18 hours 43 minutes, and, in 2004, along with Ehret, a record of 32 hours 47 minutes on the 140-mile Kokopelli Trail, which stretches from Loma, Colorado, to Moab, Utah. Perhaps the most astounding of them all, in 2006, Bakwin ran Colorado’s Hardrock 100-Mile Endurance Run, twice, for what he calls “a Contrived Double Hardrock.” Hardrock is arguably the hardest 100-miler on earth. It traverses the rugged San Juan Mountains of Colorado, starting at an elevation of 9700 feet and climbing to 13,000 feet (and higher) seven times with 33,000 feet of cumulative elevation gain. Bakwin finished the back-to-back 100-milers in 3 days 18 hours 50 minutes. Burrell now refers to his record as the “Rockhard.”

The process of researching a route and planning a speed-record attempt for Bakwin however, is less about setting records and more about aesthetics, style and love. He says, “This is not about the miles, it’s about creativity and the love of trails and the outdoors.”

Q: What sparked your interest in speed-records and starting the website, Fastest Known Time?

While Buzz [Burnell] and I were planning our JMT speed-record attempt, I spent a lot of time researching existing records began keeing a list. Then, after someone posted, “Is there a place where trail-records are kept?” on an online ultrarunning forum, I decided to launch the website devoted not to only displaying these records, but also preserving and sharing the stories that result from them. In the end, it’s what we experience when we put ourselves on the line that’s compelling and interesting.

Q: What current speed records do you consider the hardest to break?

The Pacific Crest Trail record of 2655 miles in 65 days 9 hours 58 minutes, set by Scott Williamson of Truckee, California, and Adam Bradley of Reno, Nevada, in 2009 is pretty astonishing. They backpacked in classic thru-hiker style, carrying all their gear, walking over 40 miles per day for 66 days, beating David Horton’s fully-supported, ultrarunner-style record by almost a day.

But to me, the single most impressive record on the site is a round-trip from the base to summit of 14,254-foot Longs Peak in Rocky Mountain National Park, Colorado, a route that involves challenging mountain running, fifth-class scrambling and about 5000 feet of vertical gain and loss. The record was set in 1979 by Chris Revely of Estes Park, Colorado, in 2 hours 4 minutes 27 seconds.

Q: What do you require as proof of a speed record?

I don’t require anything; the onus is on the athlete, but I do offer some pointers for verification on the website and I encourage anyone to contact me if they have issues with any record that’s posted. There have been some questions raised, but so far I haven’t found compelling evidence to discount any records.

Q: Why do you think trail speed-records are seldom called into dispute?

Since many runners that break speed records win races, we have an objective measure of their athletic ability. For example, everyone knows that Darcy Africa is a kick-ass runner, so no one is particularly surprised that she smoked the Grand Canyon R2R2R, right?

But, when Brett Maune, an unknown runner, came out of nowhere and crushed the JMT record, people questioned it. I think his Barkley finish this year quelled many of those doubts. (Barkley “Marathons” is a 100-mile race in Frozen Head State Park, Tennessee, with 59,100 feet of elevation gain that includes navigation and bushwhacking. In its 16 year history only nine people have ever completed.)