She was the toast of the mountain running world in 2011. Can Enman repeat her championship performances this year? 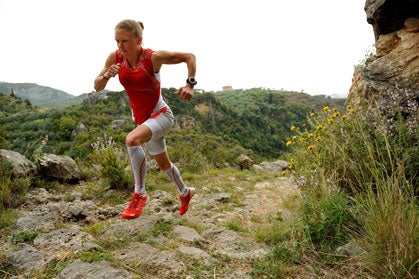 2011 was a great year for Kasie Enman. The 32-year-old native of Huntington, Vermont, made waves in the Mountain Running scene by capturing first the U.S. title at New Hampshire’s Cranmore Hill Climb in June, and then the individual title at the World Championships in Albania last September, leading the women’s U.S. Mountain Running Team (USMRT) to a fourth-place-overall finish.

“I was finally healthy and well-prepared heading into the mountain-racing season,” Enman says of her spectacular 2011. “Previous years, I was either injured or coming off injury and way undertrained. While mountain running was a great way to stick my toes back in the racing water coming off injury, I knew I had more in me.

“Still, I completely exceeded all expectations last year,” she continues. “I was also surprised at my ability to race well on the up-and-down courses, as I had previously avoided them because of a fear of injury on the downhills. Turns out the downhills are a strength of mine.”

That’s an important distinction for Enman to make as she seeks to defend both her U.S. and World title starting at the Loon Mountain Race in New Hampshire, which serves as the women’s USMRT qualifiers, this Sunday. Loon Mountain, like the World Championship course in Italy, will be primarily an uphill climb, unlike last year, when it was an up-and-down course. The World Championship course alternates between uphill and up-and-down each year, and the U.S. championships for both men and women follow suit.

2012 is already looking good for Enman—it has seen her gain a new sponsorship with Salomon and she says it will see her try her hand at the SkyRunning circuit in Europe later this summer. She also turned in a third-place finish at last month’s Mount Washington Road Race, an uphill race that served as the men’s USMRT qualifier.

We caught up with Enman as she prepares for Loon Mountain to ask about how she ended up in mountain running and hear her thoughts on the development of the U.S. team.

What is your running background?
I started running competitively in high school, running for what was a nationally ranked school at the time—Manchester Central High School in New Hampshire. So, I was exposed to a higher level of competition at meets like the Penn Relays and National Championships right from the beginning, and training and competing in cross country, indoor and outdoor track year round. I was never the best on our team, never won any individual titles, but was fortunate to always be part of strong teams.

That continued in college when I ran for Middlebury, where we took home the NCAA cross-country team title my senior year. Post-collegiately I kept at it and found the most success in cross country and on the roads, particularly at the marathon distance. I am not someone who tends to have major breakthroughs. I just keep plugging away, doing a little more each year in training and getting a little faster each year in races. I had prided myself on PR’ing in at least one distance every year up until I got pregnant with my daughter in 2010. Now, I’m working to start up that streak again.

How did you go from cross country and road racing to mountain racing?
It’s hard to say when I first started mountain running. I started doing real hilly trail running when I moved to Vermont for college and particularly when I moved to Huntington in 2002. Technically, my first mountain race was part of a super-fun multi-sport relay called Tuckerman’s Inferno. I was the sole female on our team and ran the “hike” leg up the Tuckerman’s mountain trail into the ski bowl. I did that race a few times and remember being proud one year because I had the fastest time up, beating all the men.

I wasn’t exposed to the mountain-race scene, as I know it today, until a few years later when I went to a couple of the USATF-New England Mountain Goat series races in 2007 during a period when I experienced a bout of plantar fasciitis that was fairly debilitating unless I was going uphill. That led me to try Mount Washington, Loon and Mount Ascutney Hill Climb for the first time. After having some success at those races, someone mentioned that there was a U.S. Mountain Running Team that you could qualify for and go to a World Mountain Running Championship in cool places like Italy. I have always had the travel bug, so that was enough to pique my interest. From there, [USMRT manager] Paul Kirsch played a huge role in encouraging me to get more involved in the sport and I haven’t looked back since becoming a part of it all.

Do you still do other types of racing?
Yes, cross country is probably my next favorite and I still have a goal of getting on a World Team for that someday. I have also qualified for the past two Olympic Trials Marathons and focus part of each year on marathon training. Additionally, I have goals in all the shorter road-racing distances and even dabble with the track occasionally. My goal is to be the female version of Max King. Seriously, though, I need the variety and I think it’s a big part of what allows me to be competitive on the mountains. Having said that, a technical trail race is where I feel the most natural, like that’s what I was designed to do.

It seems like the USMRT is getting harder to qualify for. Why do you think that is?
Very true. I think Nancy Hobbs, Richard Bolt, Paul Kirsch and Ellen Miller—the stellar USMRT managers—have done a fantastic job of raising awareness of mountain running, taking advantage of social media and building relationships. I might not have gotten into mountain running if it weren’t for the encouragement of that foursome. With their hard work building the team at the junior and senior level and the recent legitimizing of the U.S. and World Championships by USATF and IAAF, more and more athletes are giving it a try.

I hope that our crew coming home with two individual medals last year has played a part in bringing the best talent in the sport. I’m hoping, whether or not I make the team this year, that both the men’s and women’s teams come home with team and individual medals this year. With this year’s deep field at Loon, we’ll have our strongest team yet this year, and the men’s team is impressive, especially when you consider who was left behind.

What are your goals and expectations for the USMRT qualifier and for the World Championship?
I expect to have to work my butt off and really be on at Loon to make the top four. If that happens, I’ll start thinking about Worlds. One advantage I have is that I have raced Loon a number of times and always had a really positive experience. I’ll try to use my knowledge of the course to run a smart race.

What have you learned from the Loon course that will help you next weekend?
The first time I raced Loon, I tried to race hard and fast but was thrown off by the downhill and demoralized by the Upper Walking Boss. The second time I was sore from racing at Mount Cranmore the previous weekend, and went out much slower and just tried to get through it. Dave Dunham and Paul Kirsch asked me at the finish line if I thought I’d broken the course record. I had no idea. It wasn’t until a day or two later when Paul emailed me that I had broken it.

Last year, Loon was the weekend following the U.S. Championships so I was just running it for fun and wasn’t trying to go super fast and was surprised to find that I took another couple minutes off the record. So, I guess what I’ve learned is that you run it best when you’re having fun and not trying to force things. Not an easy task in a championship or qualifier race!