The straight scoop from the 100-mile master 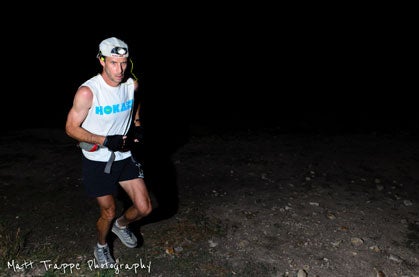 Since he finished his first 100-miler, Utah’s vaunted Wasatch 100, in 1996, Meltzer, aka the Speedgoat, has racked up 34 wins. And at age 44, he is still putting the hurt to much younger and deeper-than-ever fields. Most recently he clinched victories at September’s inaugural Run Rabbit Run 100 in Steamboat Springs, Colorado (where he collected a cool 11 grand in the process), and, three weeks later, the Grindstone 100 in Swoope, Virginia, where he broke his own 2009 course record by an hour and a half.

In 2010, Meltzer ran the 2064-mile Pony Express Trail, from Sacramento, California, to St. Joseph, Missouri, in 40 days, averaging 53 miles a day and ticking off 105 miles in 19 hours on the final day. And, in 2008, he attempted to break the existing 2176-mile Appalachian Trail record (47 days 13 hours 31 minutes, set by Andrew Thompson in 2005; that record was since broken, in 2011, by Jennifer Pharr Davis in 46 days 11 hours 20 minutes), but was hampered by injuries and ran the trail’s length from Maine to Georgia in 54 days 21 hours 12 minutes, for the fifth-fastest recorded time. Meltzer says he is scheming for a rematch with the AT.

Aside from his stellar running resume, Meltzer is also recognized for his trademark kit, which includes a Red Bull cap, headphones and biking gloves (more later). Meltzer lives in Sandy, Utah, with his wife, Cheryl, also an ultrarunner.

We recently caught up with Meltzer between recovering from Grindstone and golf games to see how he keeps on winning.

What do you attribute your strong running of late to?

Good question. I run 100s, and in 100s it’s not really about speed. It’s knowing how to race and how to strategize. I’m 44, so it would be assumed that I would start to get slower, but I only get wiser and smarter with each run. Running a 10-minute mile is not fast, even at altitude and on hilly terrain. That pace just doesn’t feel hard to me, and, because I run very conservative early, I tend to get stronger as a race progresses.

Do you know who has the next-most 100-mile wins, and how many?

Ann Trason has 22 wins. Hal Koerner, I think, has the second most, maybe 17ish, for men, or maybe Eric Clifton, but that’s all I know. I do know no one had more than Ann when I passed her.

You seem to be mixing it up between Western mountain races and rugged Eastern 100s. Why?

The Western races, being local, sort of, are on courses similar to what I train on all the time. I run on rugged terrain, so I always run races that play to my strength. Most of the stuff out west is somewhat technical, except for northern California—it’s all smooth there.

Regarding the East Coast races, I have a love for running in the woods. We can’t run in the woods out West. It’s very open, so going back east to Virginia and Alabama or Vermont is a bit different. East Coast terrain is far more rugged in most locations, because the mountains are older. It plays to my strength once again too, coming from altitude then running at essentially sea level … not to mention the timing is good as most mountain races out West are over once October hits. On the East Coast, races continue later in the year.

You recently mentioned that you are gunning for the Grand Slam record next year. Will you do any special training for that?

No special training. I’ll just deal with the heat at Western and Vermont—I’m not getting in a sauna! And I am not really sure I am running the Grand Slam. If Run Rabbit Run [RRR] happens again, I’ll go back and run for money again. The prize purse will likely be bigger. The Grand Slam is only my real intention if RRR doesn’t happen.

I really don’t care to run Leadville, because it’s a fiasco now, Vermont is kinda boring dirt roads, Wasatch … I’ve run that one a lot.

I got into Western by default [by winning RRR, a Montrail Ultra Cup event], so everyone expects me to attempt the Grand Slam. I don’t typically do what other folks say I should. I do what I want … so we’ll see. The Grand Slam is a good goal, but not entertaining enough for me to really care about it that much. I tend to run races where I feel the course is tough and fun at the same time.

Regarding the big payout in RRR, how much does the cash also motivate your decision to run a race? And do you see bigger purses being a positive thing for the sport?

Cash is the ultimate motivator.  I am a huge advocate of bringing money into the sport. I helped Fred Abramowitz [RRR Race Director] get his race going. It was a surprise to actually win it. I was also surprised to not see more top runners enter for a chance to win 10 grand. I think they are all foolish.

Hopefully, next year, more of them will race on their own turf for some real money, or this old man will gladly take it home. Steamboat may not have received the recognition it deserves, but I’d rather have a big check in my hand than a big trophy.

So, how about those Hokas? What do you like about them? Do you feel as agile in them as lower-profile shoes? Have they actually made a difference in your running?

I like a comfortable shoe. That’s what Hokas are: super comfortable, soft. I don’t roll an ankle because they mush out. They protect my feet and body from pounding, and I never get blisters. I feel perfectly agile in them. Just because they may look like you can roll a foot or ankle, that’s not so.

Minimalistic shoes are for folks who buy into fads and salesmen. People should, in my opinion, run in something with cushioning. I see lots of folks start a race in little shoes, then drop because their feet are destroyed.

How does your typical training mileage break down?

How long are your long runs, and how do you pace them?

Yeah, but’s it’s pretty basic, more just to see how many miles I end up doing by December. But I don’t make a schedule before I run. I just fill in the sheet later.

I essentially run on “feel.” Many days, I go out and decide how far or how fast I’m going to go as I go along. I’ve had days where I thought I would go 20ish, then went six … and vice versa. It just depends on the day. It is very effective because I always run what my body wants, not what the book says.

How do you recover so quickly, e.g. you just ran RRR three weeks before Grindstone?

One more time [laughing]—I have soft, comfy shoes, my body doesn’t get beaten up as much and I use a recovery drink.

Three weeks apart is not uncommon for me to run fast 100s. It’s not about running fast; it’s about being able to mentally keep going at an “easy” pace. I always run easy in a 100, but I can run it all day and night. That’s the difference. Doing it now 59 times, it gets easier. One hundred miles really is not that far.

I also never force my miles instantly after 100s. I use poles for a week or two to take a bit of the pounding off my body too. Today [October 12], for instance, was the first day out since Grindstone [October 5]. I walked six miles and gained about 1500 feet. Just took it easy. Judging by the way I felt, I will do this for a few more days before I run.

Do you need more recovery time since hitting the big 4-0?

Maybe a little bit but not much. I attribute that to just knowing how to go about it, by being patient and really listening to my body. I don’t run through ricketyness and pain after a race. I come back slowly if need be. I feel the age thing more during winter months when it’s cold; during summer when it’s toasty outside, my body is lubed pretty well.

Do you do any cross training?

No, I drink beer.

What is your favorite beer?

I don’t watch sports teams. To me it’s extremely boring to watch football, basketball, baseball, the mainstream sports. I watch a lot of golf, maybe track during the summer, skiing during winter, if anything. Many people may think it’s boring to watch golf, but I am a pretty good golfer, so to me, every shot is different and I understand how hard it is. It is my retirement sport for sure.

When are you going back for the Appalachian Trail record?

In the future, that’s all I know now. I wish I could do it next year. I would blow off the Grand Slam and Western if I could get the support I want … which is one person to scumbag it with me the whole way.

So, what’s with the gloves? Readers want to know.

When I crash, I don’t ruin my hands. I can carry two gels in each glove, so they are functional that way too. The next time you crash and have a flapper hanging off your hand, let me know how that feels.

What do you listen to on your headphones?

A mixture of jam bands. My favorite? The Dead—who else?

Part of your winter training the past couple of years has been creating a luge run in the Wasatch Mountains (http://www.youtube.com/watch?v=KMJwheDCLRQ). What’s top speed on it?

Maybe 20 miles per hour after the roller. It’s epic and will be better again this year.

What can we expect with the Speedgoat 50K next year?

The course will be the same. The only change I’d like to see is more prize money. It should be a World Skyrunning race, but that’s not confirmed. If it is, great; if not, doesn’t matter. There will still be Ultragen, pizza and beer for all at the end, along with lots of $100 bills.

Are you able to support yourself from your sponsorships and coaching? Any more bartending?

I will never wait on anyone in the restaurant business again. Yeah, I can support myself with coaching and running. I don’t need much, and I’m not getting rich, but my life is good financially. Work to live; don’t live to work.