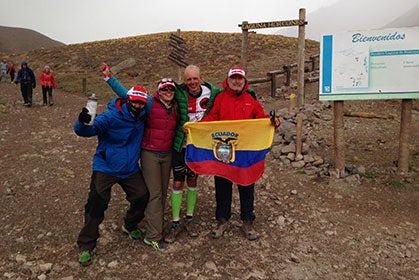 Egloff (second from right) celebrates with his girlfriend Adriana (second from left), her father (right) and a friend at the end of Egloff’s record-setting run on Aconcagua. Courtesy of Karl Egloff.

Egloff was born in Ecuador, where he’s lived most of his life, to a Swiss father and Ecuadorian mother. His father was a mountain guide who “came to Ecuador and stayed here because he fell in love with my mother,” he says. Egloff has followed in his father’s footsteps, often literally, by becoming a mountain guide himself, eventually founding the company Cumbre Tours.

That’s putting it mildly: in addition to Aconcagua, Egloff holds the speed record on Tanzania’s 19,340-foot Mount Kilimanjaro, which he set in August, beating another of Jornet’s records.

Trail Runner caught up with Egloff to learn more about the man who’s ticking off Jornet’s stout mountain records. 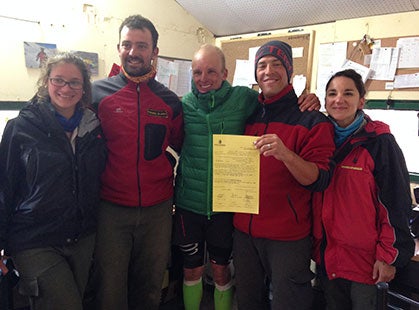 Egloff receives his official record certificate from Aconcagua park staff. Before his attempt, Egloff says, park rangers thought of him as “another crazy guy who wants the record.” After his finish, he says, “I was not just a ‘crazy’ guy anymore.”

1. What is your running and mountaineering background?

After I turned 15, my father allowed me to climb my first 5000-meter [16,400-foot] mountain with him, the emblematic glacier Cotopaxi, in Ecuador. But mountaineering was not my priority during those days. Football was always on my mind, as football is not a sport in South America, it’s a religion. I changed from football to mountain biking, because I got injured and the doctor recommended I cycle for recovery.

During all this time, I never stopped guiding in the mountains, so climbing and guiding have always been part of my life. I changed last year from mountain biking to speed climbing, using trail running for better acclimatization during my trekking trips as a tour leader for Swiss groups in Peru, Nepal and on Kilimanjaro.

2. When did you first decide to pursue speed records on Kilimanjaro and Aconcagua? Did you start with the aim of breaking Kilian Jornet’s records?

As my mind was focused on mountain biking and football, I did not know about Kilian when I set up my goal to go for Kilimanjaro’s speed record [at the beginning of] last year. In February 2014, I started Googling him for the first time. But my Kilimanjaro trip was already booked, and the attempt for the speed record was also planned.

When I arrived to Tanzania, during my acclimatization with my [guiding] clients, I read Kilian’s book, Run or Die. Since then, I started to get very nervous with the fact of who I was challenging. To believe in myself was one of the most difficult things during my preparation in Tanzania.

After breaking his record on Kilimanjaro, I already had a group booked for an Aconcagua expedition with my agency Cumbre Tours this February. I heard that Kilian was flying down to Argentina in December, so I changed the ticket by a couple of days to set the speed record after the expedition. 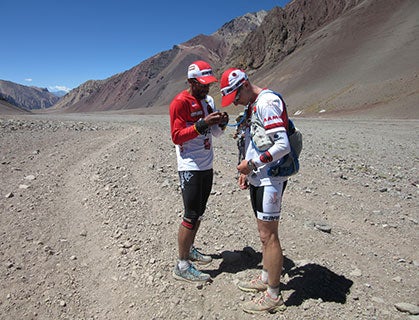 3. How did you train for your record-setting run on Aconcagua?

I started my training six months prior to going to Aconcagua: speed sessions, hill runs, intervals and strength training, combined with my 20+ guiding hikes to 5,000-plus meters in the Ecuadorian Andes. Ecuador has a lot of 4,000-meter [13,000-foot] mountains, some 5,000-meter [16,400-foot] and also a 6,310-meter [20,702-foot] mountain, Chimborazo. All our mountains are close to the city, so it is the perfect “playground” for acclimatization and training at altitude.

I traveled [to Aconcagua] 15 days prior to the record [attempt] with an Ecuadorian expedition group. We slept many nights over 4,000 meters—even 3 nights in a row over 5,500 meters. We climbed the summit three times in eight days, two of them [quite fast]. The mountain always allowed us to do it, so I really have to thank Aconcagua for the opportunity and for opening its doors for us.

4. Are you actively chasing Jornet’s records, or is it just coincidence that both of you are running the same mountains close to the same time?

I haven´t had the pleasure of meeting Kilian yet. I admire him a lot as an athlete. It is incredible to see all the coincidences of our records, nothing personal against him at all! Both our projects seem similar, taking into account that we are breaking records on known mountains such as the Seven Summits [the highest peak on each of the seven continents], with slight differences. The Seven Summits is my personal project. [Ed. Note: Jornet’s “Summits of My Life” project includes some, but not all, of the Seven Summits, in addition to Europe’s Mont Blanc and Matterhorn.]

5. Have you talked to Jornet since the Aconcagua record?

No, but he posted a very nice message on Facebook and Twitter congratulating me on the record. I am honored by this action and very thankful as well. He is a gentleman. Of course I replied, thanking him back.

6. What’s next for you in terms of mountain running?

Most likely, this year, something in Peru, and if everything goes well, Denali [North America’s highest summit, at 20,321 feet] for 2016. 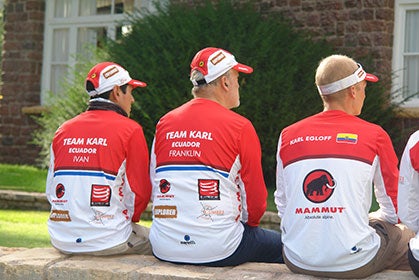 7. Anything else you’d like to mention about the Aconcagua record?

I have to thank my team for making this possible. My great friends and excellent Ecuadorian mountain guides, Nicolas Miranda and Ivan Herrera, helped me with logistics, food and clothing at the high camps. Nico came with me from Plaza de Mulas [the second camp, at 10,892 feet] to the summit! Cesar Alvarado was waiting for me at Confluencia [the first camp after the trailhead]. My girlfriend and her father were at [the trailhead at] Horcones, waiting for me and organizing logistics, permits and medical assistance.

The Five Most Read Trail Runner Articles in December 2022