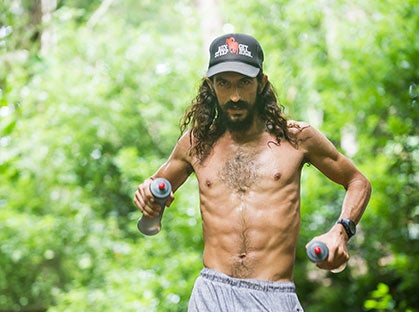 Coury at the HURT 100, the first race in his brutal “Slam of the Damned.” Photo by Laura Casner

Last winter, Jamil Coury hit the race-lottery jackpot: he scored spots in the HURT 100-mile Endurance Run, the Barkley Marathons, the Hard Rock 100 and the Ultra-Trail du Mont-Blanc, or UTMB. Coury, 30, of Phoenix, Arizona, decided to take them all on as a series he titles the “Slam of the Damned.”

In January, Coury, known for his long, shaggy hair and stout ultrarunning resume, began the series with HURT, a slog through the mountainous rainforests of Hawaii with an average humidity of 80 percent and finishing rate of 40 percent.

Just a couple months later, he was the last man standing at the Barkley Marathons, a notorious 100-miler in Tennessee’s brambly hills that involves route finding, bushwhacking and obeying a quirky set of rules and traditions. Coury finished four of the five loops in 56 hours.

In July, Coury completed Hardrock, a rugged loop in the San Juan Mountains with over 33,000 feet of elevation gain. Then, in August, he completed UTMB, a highly competitive race in the Alps of Western Europe.

With the four races now in the rearview, Coury remains busy with the two trail-running companies he founded and owns: Aravaipa Running, which puts on the popular Javelina Jundred and other races, and the video-production and apparel company Run Steep Get High. Here, he discusses the inspiration behind the Slam of the Damned, what it took to get through the four races and his plans for next year.

How did you start trail running?

I was a runner in high school. My freshman year in college, I found a local group of trail runners in Phoenix and started running with them. We would do weekday runs and low-key adventure runs on the weekends, and I just fell in love with trail running and ultras. I’d been hiking and backpacking as a kid and I already loved the outdoors—this way I could explore more in a day.

In 2006, I saw photos of that year’s Hardrock, and as soon as I saw that, I knew that it was my race, I had to do it. I decided to do my first 100 because I needed a Hardrock qualifier.

What inspired the “Slam of the Damned”?

The idea of stringing together all of these really difficult races really appealed to me. The HURT 100, Barkley, Hardrock 100 and UTMB—they’re all lottery-dependent, bucket-list races. You’ve got to do them at some point, so when I was planning out what I wanted to run this year, they were all on my mind. And then I got into every one.

It’s not only the toughest to get into all these races, but these races are some of the hardest 100-milers in the world. Geographically, they are spread out, so that they’re all unique and hard in their own ways. You have the high-altitude mountain running of Hardrock, and the HURT 100 with the roots, mud and Hawaiian climate. Then there’s Barkley, with crazy weather and crazy rules, and UTMB, which is the biggest 100-miler in the world on this grand stage.

I had never done that many 100-milers in one year, and I’m immediately drawn to the toughest races as it is, so it just made sense to do them together.

As for the name, I just tweeted: “Hey, what do you call a plan with HURT, Barkley, Hardrock and UTMB?” People responded with names like the “Pain Slam” and the “Dumbass Slam” and the “Lucky Slam.” It was actually Chris McDougall, the author of Born to Run, who tweeted: “How about the ‘Slam of the Damned’?” And so I adopted it.

How did you train for the Slam?

It’s hard to peak for all four races and try to really race all of them. Barkley was the one race where you’re basically guaranteed a failure, so I really focused on that one. The HURT 100 was like a training run for Barkley, and although I didn’t have a stellar race there, it did provide a nice building block.

Training in Phoenix, the options for steep climbing are somewhat limited, so I just do repeats of the peaks. They’re only like 1,000 or 1,200 feet high. On my biggest training day, I did thirteen repeats of North Mountain. I was averaging 15,000 to 22,000 feet of climbing per week.

Looking back on it, that probably wasn’t enough for a five-loop Barkley finish.

After Barkley, my goals were to do as well as I could at both Hardrock and UTMB, but training didn’t really come together and I suffered a bit of an injury a couple weeks before Hardrock. I went into both races feeling undertrained, so I was out there way longer than expected and walked the last half of both races.

What was the most challenging part of the series?

No question, Barkley was the most challenging, but my finish at UTMB was also really difficult. I started having issues at around mile 45, especially with my shin, and I couldn’t run downhill. It was really frustrating, and it meant that I had to hike a lot and be out there a whole extra half-day.

Do you have a most memorable moment?

I probably had the best memories finishing loop three at Barkley. Even though I didn’t finish, that race is so incredible, and I was running really hard and felt really good.

This year, I was the only one to start loop four. I got a couple hours into that loop—so roughly 35 hours into the race, in the middle of the night—and I got confused about where I was. I thought I could lie down for a little bit in the woods, but I slept too long, and then it started raining and I got cold. I ended up crawling under an overhanging rock and sleeping the night away.

When I got back up, even though I was already disqualified, I wanted to complete the loop. I was over the cutoff, and I knew that, but it was a beautiful day and I was just by myself, navigating the course, and the pressure of racing was lifted.

How did you feel after the Slam?

I was in a lot of pain, but there were just so many points along the whole year where I could have quit and I didn’t, so I was really happy and relieved.

What’s next for the Slam of the Damned?

I don’t think it will become a popularized series, because you can’t really plan for it—it’s too hard to just get in to all of those races in a year, let alone run them. Plus, I already have plans for the “Slam of the Damned: Part 2” with a different set of races.

I get inspired by the idea of stringing together something that seems impossible or really hard, and if anything, I hope more people would get into that.