Rainshadow Running events lure you in with beer, bluegrass and longer-than-advertised races

To know James Varner is to know his donkey-like laugh. To know one of the 12 Washington- and Oregon-based trail races that … 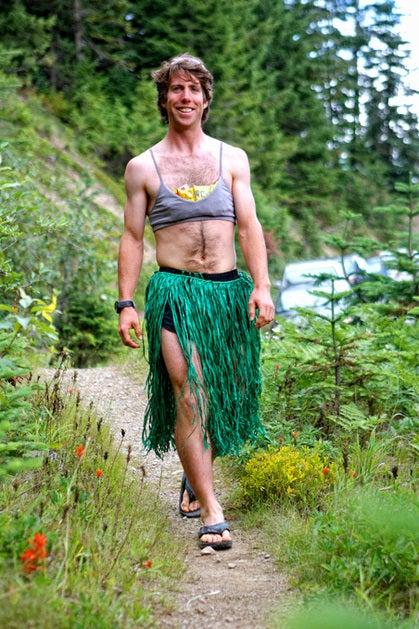 To know James Varner is to know his donkey-like laugh. To know one of the 12 Washington- and Oregon-based trail races that Varner directs for his company Rainshadow Running is to know insane pain and elevation gain. Treacherous climbs, technical terrain, mud ponds and mutant banana slugs are all staples of a Varner event. “James is the only race director I know who can create a race that always goes up and never goes down,” says Varner’s longtime friend Herb Reeves, 57, of Olympia, Washington.

But then, there is nothing “moderate” about Varner. This is a guy who lived in a school bus for two years, routinely drinks unfiltered stream water, runs in flame-red 70s-style short shorts, once kicked a marmot out of an oversized burrow when he needed a place to bivy and ate three chili dogs in a row while training on the Plain 100-Mile Endurance Run course in Leavenworth, Washington.

His newest race, the Gorge Waterfalls 50K, features 12 misty waterfalls in an emerald forest with jaw-dropping views of the Columbia River Gorge. This year’s inaugural race, which took place on March 12, filled to its 150-runner capacity. Heidi Dietrich, 31, of Seattle, Washington, ran the 50K, and says, “You can count on James to create an extremely challenging (and scenic) course. I’ve yet to run one that hasn’t pushed me to the max.”

The Orcas Island 50K and 25K, perhaps Varner’s most popular event, has grown from 67 to 400 runners in just six years, with a waiting list almost as long. Says Dietrich, “During Orcas, my running partner looked over at me and said, `Is he serious?’ several times during chinscraper-esque climbs through weeds and bushes.”

John Pearch, 37, director of the Capitol Peak 50 Miler and 55K in Olympia, Washington, says, “If you go to one of his races, plan to stick around for the post-race gathering with stellar musicians, locally grown food and great microbrews.”

Why did you become a trail-race director?

When I moved to Olympia in 2004, I signed up for my first 100-mile race, the Plain 100, which has only had four finishers [it is self-supported and unmarked] in the race’s six-year history. It was cancelled due to a forest fire, so I emailed other race entrants with an alternate route we could do as a “fun run.” The Plain 78 Miler was born. In three days I had the route mapped, volunteers acquired and aid-station logistics figured out. Only four other runners joined me for this loop, which had more elevation gain than Plain 100, but it made me a race director. [No one finished the Plain 78.]

In 2008, I quit my job in Olympia, and moved to The Methow Valley on the sunny eastern side of the North Cascades. It is packed with endless miles of trails, and, when I moved here, it had no ultramarathon races. I directed the first trail ultra, Sun Mountain 50K, in the Methow Valley.

Why do you think your races are so popular?

I like to think of my races as huge parties with a little bit of running thrown in. I seek locations that are extraordinary and create courses that flow naturally with the landscape. All of my races finish somewhere everyone can relax, cheer for other finishers and lounge with a beer while listening to live bluegrass music. I also encourage carpooling and organize trail work parties.

Your friends say you are extreme. Why would they say this?

I tend to make my life harder than it has to be. Once, when I was injured and sidelined from running, starting at 1 a.m. I went for a spur-of-the-moment, 200-mile bike ride from Olympia to the Pacific Ocean over the Coastal Mountain Range and back to Olympia. I was alone with nothing but a couple of gels and a debit card. My butt hurt so bad I almost bought sponges to put in my running shorts. I had to ride the last 25 miles standing up. The longest I had ridden my bike in the proceeding five years was earlier that day, when I took a 35-mile ride with a couple of friends before drinking beer and watching the Super Bowl.

You have a lot of races to juggle, so what is your training like?

When I started training for 100-milers, I organized challenging training runs I called “The Epics.” For example, 32 miles through waist-deep snow, 17,500 feet of elevation gain over the same distance or point-to-point runs through the wilderness with not enough food or time in the day to complete that no one would ever join me.

On one such 56-mile loop in Olympic National Park, I started late, forgot a headlamp, stopped to chase after some bears for some photos, accidentally left my water bottles at the top of O’Neil Pass only a quarter of the way into the run and when it got dark, I had to curl up under some ferns and wait shivering for the sun to come up. Six friends started this run with me, but turned around at a reasonable time to get back to the trailhead before dark. I was the only one foolish enough to think I could make it the whole way before sunset.

Check out www.rainshadowrunning.com to learn more about Rainshadow Running events.