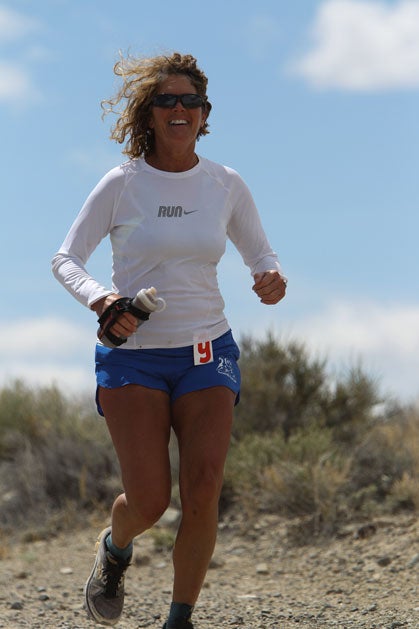 In 2012, 53-year-old Liz Bauer of Plainville, Georgia, finished 36 100-mile races, on terrain ranging from smooth pavement to extremely technical to high alpine. She fought her way through blisters, tendinitis and dead legs to break the record for the most 100-milers in a given year. For this, Bauer credits her partner, Scott Brockmeier. Brockmeier wanted to see if he could run 30 hundreds in 52 weeks.

“He asked me if I would like to try with him. I said, ‘Sure, why not?’” says Bauer. “Scott became injured in late March with an Achilles tendon injury and had to take a month off. Even with only 11 months of running, he pulled off 27 hundreds, more than any other man had previously done in a year.”

Brockmeier was forced to cut his challenge short, but he still drove Bauer to most all of her races, and offered non-stop emotional support as she attempted to recover between races. “Running 36 hundreds was a full time job,” says Bauer. “Trying to work night shifts as a critical care RN was like adding overtime.”

We caught Bauer in a rare down moment between long work hours:

How did you recover between races?
I did not run any training miles between the 36 hundreds I ran. The swelling in my legs would often not go down until nearly a week after the race, especially following a difficult run like Hawaii’s HURT or Colorado’s Hardrock. I also had a lot of trouble with blisters early in the year—the worst during HURT. I finished that race late Sunday afternoon, so only had five rest days before my next hundred, Florida’s Long Haul. I taped my feet really well and ran anyway, despite large blisters on the bottoms of my feet. I experienced less discomfort than I expected.

How has your body held up this year? Do you feel like running this many 100s is sustainable for you?
I felt pretty strong early in the year. At the Zion 100 in May, I got lost during the night and ran an additional 20 miles. That knocked me back with exhaustion. The Keys 100 the following weekend was slow and difficult. Still, I raced the Nanny Goat 100 the following weekend and ran my fastest race of the year, crossing the line in 21:02.

After Bighorn 100 in June, I developed significant pain and neuromas in my feet. The pain became increasingly worse, so after Leadville, Scott suggested we try HOKAS. I wore them for the first time at Lean Horse 100 the next weekend, where I pushed really hard to try to break 24 hours (I ran 24:06). Since it was my first time wearing the HOKAS, I was not used to the low heel profile. This may have contributed to the tendinitis I developed in my left flexor tendon. Ten weeks and eight hundreds later, the tendon had improved, but my legs were dead.

Were there any moments when you felt unsure you could keep going? What prevented you from stopping?
Quitting was never an option. I ran through some pain, but never enough to stop me.

What have you learned from racing so many back-to-back 100s this year?
I have learned that we can do so much more than we think. It is the hardest times in life we remember. A painful struggle can turn into a glorious victory if you are patient and believe in yourself.

How did you get into ultrarunning?
On a bus ride once, I overheard some people talking about ultras. At the time, I didn’t even know what an ultra was. I became fascinated by these “people.” I signed up for the Sunmart 50 Mile in Texas and ran it on very little training. During the last five miles, I cried and said, “No more ultras!” Six months later, I ran my first 100—and have never looked back.

What appeals to you about ultrarunning?
Ultrarunning appeals to me because I love being outside and moving my body. There is no greater feeling than to look ahead to a faraway mountain range, reach it, climb over it and look back at where you have been. Running is my passion, and being in the mountains is living.

How has trail running positively influenced your life?
Trail running has given me a greater appreciation of the beauty around me. I often refer to the woods as my church. It is where I feel most alive. Running also has given me a deeper understanding of how important our bodies are: strong yet extremely fragile. We must take care of them. Good health is a gift.

What is your diet like?
I like meat. I try to eat organic as much as possible, lots of fruits and vegetables. With all the travel this year, though, I must confess: I could have used a sponsorship from McDonald’s or Dunkin Donuts! It was an expensive year so I had to cut back on expensive food.

Tell us about your life outside of running.
Scott and I live on my 55-acre farm with two horses and a dog. I have a small, close family consisting of my dad, step mom and brother; I lost my mom to cancer. I used to show horses (eventing), but now they are just family pets. I am also an avid sailor with a lifetime goal of acquiring a blue water boat and sailing to Europe. I grew up with boats. I actually lived on one for two years with my family. I also enjoy yoga and farm work.

The Best Hydration Vests of 2022