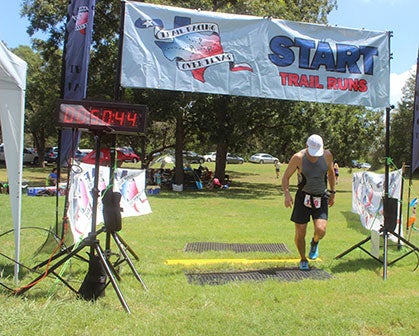 When the gun goes off, the sun burns directly overhead. The air above the trail ripples beneath the weight of the 97-degree heat, trapping dust and grit. It’s hard to believe that anything would be outside at noon on a mid-August day in Smithville, Texas, let alone an excited pack of runners ready to take on a 100-mile race.

But outside they were. The Habanero Hundred, held August 22 and 23, featured 100-mile, 100K and 50K courses with solo and relay options. Starting at noon in Buescher State Park, the course consisted of a 7.5-mile lollipop-style loop that took runners through 300 feet of up and down per lap over rocky, sandy terrain, some shaded, some directly in the sun. 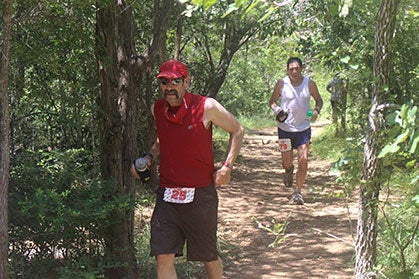 Runners enjoy a semi-shady stretch of trail. Photo by Jeff Ball/courtesy of Trail Racing Over Texas

Because of the incredible heat, the course was designed so that runners were never more than 3.5 miles away from an aid station, and the noon start time let runners complete the most hottest part of the race while at their freshest.

Despite the precautions, Julie Koepke, 33, of San Antonio, was the only one of 28 starters to finish the 100-mile race. That is not to say, however, that it wasn’t a big success.

We caught up with Rob Goyen of Katy, Texas—the Habanero Hundred race director, director of Trail Running Over Texas and an ultrarunner himself—to see how it all went down.

I had the name a year and a half ago, when I started putting on races, and I could never really think of a race to go with it. Then I thought of trying to put on the harder tricks.

I’m definitely not sadistic, like I don’t want to hurt people, but I kept thinking: there’s a lot of races now that are geared towards having as many people finish as possible. You put aid stations really tightly together, you poll the weather, so on and so forth. My thought was, what if I don’t do that? What if I put on a race where I don’t care about the finishing percentage? You put people in the worst conditions to see what happens and give them a chance to really test themselves.

Photo by Jeff Ball/courtesy of Trail Racing Over Texas

I think one big difference for Habanero is that we had more planning than we’ve ever had before. Second is that we had a 30-hour cutoff, and the length of time was a challenge. The third difference would be medical—this was the first time that we had medical requirements where we needed EMTs and medical professionals working the entire race.

Also, we required runners that ran the 100K to the 100-miler to actually weigh before the race, and then we mandatorily had to weigh every one who came in. If they were up or down weight we could try to help them get back to even and stay on the course. I would have hated to see how it would have worked had we not done that because I think it was a really useful tool—not only for us, but for the runners too. It’s a great tool for runners to be in tune with their body and know if they’re not taking in enough water or taking in too much water.

What kind of runner is attracted to this event?

I think gluttons for punishment. In Texas, you train through the year. We don’t take a lot of time off. So we saw a lot of people from the south running, from Louisiana, Texas, et cetera. The relay also attracts people who don’t necessarily run ultras, which is great, that’s a good mix.

I think that this race, even on its first year, is already becoming a very infamous race. We had only one female finisher for the 100-miler, and people heard about what happened and how hot it was. This is potentially going to be a race that people look at next year and say, “Hey, you want to battle the baddest trail race in Texas? I think this is your race.”

There’s not a race in Texas that would even be close to this as far as mental strength—I mean the loops, the heat, everything involved.

How did runners deal with the heat?

They did good. The trail wasn’t an easy trail—it is semi-technical, not a technically difficult trail, but not an easy trail either—so to get into that environment in the heat where it’s just loop after loop, even with aid stations, with weighing and ice and all those things, I think people kind of found out the truth of what it’s really like to run in the heat. And then at night, the sun goes down, so you don’t have the heat on you, but then you have this huge blast of humidity.

We had to do a lot of educating on the course. I felt like maybe runners would be better suited, since the race is in August and we gave them warning, but we found a lot of people running the relay didn’t understand how much water they needed. We even had to tell people who had been in the sport longer, “You know, listen: you have to carry this much water, you’re losing this much water when you’re running.”

It was pretty miserable, to say the least. It was obviously extremely hot, and there were horse flies out there, and those flies bite. It was one of those races where you know that every person who got up there and stood up there for that race—we were all in it together. You really appreciate each other when you’re hating life on loop eight of fifteen and it’s an extremely hot and miserable trail. 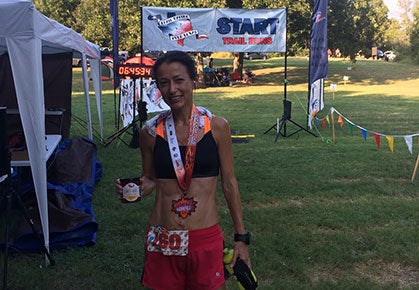 A 50K finisher with swag. Photo by Jeff Ball/courtesy of Trail Racing Over Texas

Were there any issues during the race?

There weren’t any big issues, per se. Nothing that I would consider widespread. We had a runner who we had to get taken off the course very late in the race as a precautionary measure, because he was an older gentleman with a preexisting heart condition. Once our EMT had noted that he had this condition and was dehydrated, we just opted to take the safe route and have the EMTs take care of him rather than have to worry about it. Other than that, we didn’t have many issues on the course at all.

Any thoughts about next year?