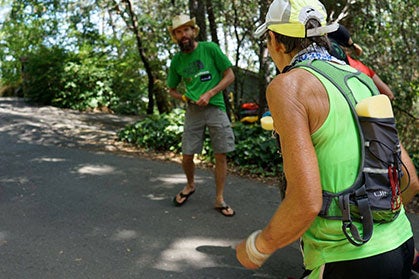 With about one mile to go, Swanson is joined by repeat champion Rob Krar, who, she says, helped coach her to the finish. Photo by Gary Wang

Gunhild Swanson had just hit the Auburn High School track when she reached out her arm and shoved away a well-wisher to her left.

“I felt bad, but I had to get to that inside lane,” says the retired Spokane, Washington, resident.

Like 300-odd others, 70-year-old Swanson had set out the previous morning from the Squaw Valley ski area, some 100 miles away by trail, at the start of the Western States 100 Mile Endurance Run. Now, she was hoping to cross the finish line, only a couple hundred yards away, under the 30-hour cutoff, like the 252 runners before her. If she made it, she would be the oldest woman ever to finish the storied race.

But she was cutting it close – really close. Hence the urgency. As she rounded the final turn, she had less than 100 meters to cover, with less than 20 seconds to do so.

“I turned the corner and I saw the clock and I knew I had it,” she says. “All I had to do was maintain the momentum. And there it was.”

She finished with six seconds to spare, covering the 100.2-mile course in 29:59:54. That moment – including the most raucous crowd celebration any finisher encountered all weekend – was captured on a video that has since gone viral.

We caught up with Swanson to ask more about the race – including her encounter with repeat champion Rob Krar at the end – as well as her longevity as a runner and what she plans to do next. 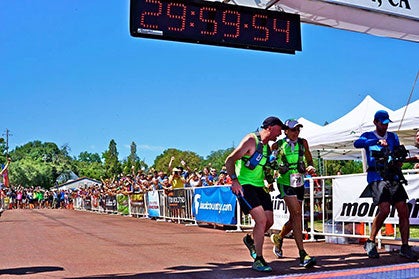 Swanson crosses the finish line with six seconds left on the clock to become the oldest female finisher in Western States history. Photo by Gary Wang

First things first – how did you find yourself running 100-mile trail races?

I started running in 1978 and in 1980 ran my first marathon. In 1987 I ran my first ultramarathon, the Le Grizz 50-miler in Montana. My husband – he has since passed away – was a runner, and we actually met running. Anyway, some friends had already run Le Grizz before they talked us into it. They said, “You’ve run several marathons, you can do an ultra.”

So we signed up really not knowing what we were getting into. And I loved it. I guess it all kind of started as a dare, if you will. I can’t out-sprint them, but I can certainly outlast them.

After that, I still mostly competed in marathons. It was only many years later that I started to do more trail races and runs and I really liked those. I’ve taken that up even more since [my husband] passed because so much of our time was taken up doing marathons. Trails weren’t his cup of tea, but he was a great supporter.

Going into Western States, you knew there was a chance you would be the oldest woman ever to finish the race. Were you worried about your chances of finishing? What was your preparation like?

After I got in [via a sponsor’s entry], I was worried about my chances of finishing. I thought about that a lot. So I got a coach and trained a lot. My training went well, my head was in the right place and my support was the best. I went into the race feeling strong and confident that I could make it, barring any disaster.

What were your expectations then?

I had left myself a window between 28 hours and sub-30 hours. Twenty-eight would have been a dream goal and that was based on what I did ten years ago and what the WS100 program said; they give you expected splits between aid stations so I compiled a list and estimated my time. But really, any time sub-30 I would be happy with.

Take us through the race. Did you stick to your expected pace in the early miles?

I had my pace chart with me and after the first couple aid stations I realized I was behind 28-hour pace and that it wasn’t going to get any better. At Robinson Flat [at mile 30] I was within 20 minutes of the cutoff time, which is actually well over 30-hour pace; at the next aid station I was within ten. That early in the race, that worried me. I was anxious but I also knew it was just the terrain – I never felt overheated and there wasn’t anything wrong with me, but I couldn’t make time on the rocky, steep terrain fast enough.

As I’m getting older I’m getting more conservative – I’ve fallen and broken bones, and that was always in the back of my head. I knew I was being too conservative and I knew runnable sections were ahead of me and I could make up time there.

Where did things turn around for you?

Once I got to Michigan Bluff [at mile 56] I picked up my pacer [her son Chris]. He knew we were still behind, so his task was to lead me down the trail and get me to start picking up time. We did just that and soon I was well within 30-hour pace, up to an hour ahead.

I was floating along and confident, then I changed pacers at Rucky Chucky [a river crossing at mile 78], and after crossing the water, my legs felt so good hiking up on the other side. The new pacer was my 15-year-old grandson – it was his first pacing job. He was phenomenal. It was great to share that time.

So things must have gone awry if you lost most of that hour.

Yes, disaster did strike. It had just turned daylight, we were all alone, came to a junction and I made the most stupid rookie mistake: there were two runners ahead of us and I turned to follow them.

Since we had turned off our headlamps we weren’t following the reflection of the course markers any more. I didn’t pay attention, didn’t look for ribbons and just followed runners. We went [up] a long climb and didn’t see any ribbons, but we didn’t turn around. Then we came up on a paved road and wasted time looking and making sure we weren’t missing something.

I sent grandson down the trail to find the last marker we had passed; he did, came back, and we ran in, but by then all the time we had in the bank and then some was lost. At that point, I of course got really low again.

You obviously found some of it back, though.

I started doing the math in my head and it just wasn’t adding up. I told my grandson that this wasn’t going to happen, but he just wouldn’t even entertain the notion. He said, “You’re gonna make it, follow me, keep going, you’re going to be fine.”

So I followed him and I ran and hiked as hard as I could. My third pacer was ready, and he said, “I know what we have to do, I know the pace we have to maintain.”

He guided me across No Hands Bridge [mile 97] and up to Robie Point [mile 99]; by then, some people came down, not only my crew but a volunteer with a bucket of ice water. People were doing anything they could do to aid me without physically aiding me. My whole crew gathered there to push me up – how could I not do my best at that point? [Editor’s note: Swanson ran the last two miles of the course nearly as fast as women’s champion Magdalena Boulet.]

There are some pictures of men’s winner Rob Krar meeting you with about a mile to go and joining the posse. Did you realize what was happening or did you think your hallucinations had just gotten really bad?

I was extremely clear-headed, never hallucinating or sleepy or out of it. [Krar] just fell in with the crowd and he ended up next to me on the right. He mostly gave me specific instructions – what to do, how to do it – because he more than anyone else knew what it was going to take.  When I faltered up a hill he said, “You can’t put your hands on your hips, you have to pump your arms.” He would point to trees and shady spots up ahead and tell me to run hard when I got to them. He practically coached me step-by-step: “Focus on that uphill, keep your momentum,” and so on.

When we finally got to the downhill before the track, I felt like I was flying, and we were about to turn. [Krar] said, “When you’re on the track you’ll want to slow down, but don’t. Run the same pace.” He told me to get in the inside lane, so I pushed someone out of the way on my left to make a beeline there. Pretty soon I turned the corner and I saw the clock, and I knew I could cover the distance in the time I had.

You finished with six seconds to spare. What was that like?

I was hoping not to cut it that close, but I guess I’ll take it. It’s almost embarrassing, all the attention I got; 250-some people crossed that finish line and each of their stories is as poignant as mine. I was just the last and the oldest. They deserve as much kudos and applause.

What is your training like? How do you keep doing it at age 70?

Gearing up for Western States, I trained mostly based on time and hours. Time would increase – I would have a five, six, six-and-a-half-hour run followed by another five-hour run. In May, I tallied just under 370 miles for the month. That’s pretty high mileage and I’m fortunate that I can sustain high-mileage running, and always have. In a year, typically, I’ll be at 2,500, 2,600 miles, sometimes more, sometimes less.

I’m blessed: I don’t have any major problems. I’ve had my share of injuries, and I’ve had injuries from falls, but have always been able to bounce back and they’ve been little blips in the scheme of things.

One thing is that I try to eat better than I did years ago, even when I was running in my prime, running PRs in my 30s. I think I live a little bit healthier now. Nothing special – I’m not any kind of diet or weight fanatic. I just live.

What’s next for you?

I’m running the Kauai marathon on Labor Day weekend. My school friend is coming to visit me, and she’s always wanted to watch one of my races. But watching a race when you’re not running is like watching grass grow, so I figured we should go to Hawaii because she’d never been there and we can make a fun trip out of it.

How Western States Became a Race