California ultrarunner Chris Eide to head to Leadville this year 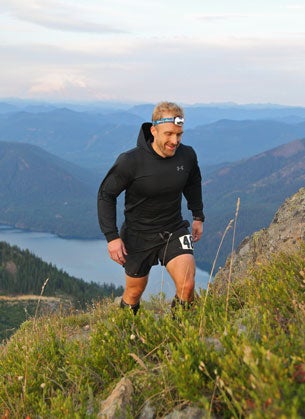 Eide at the 2012 Cascade Crest 100. Photo by Glenn Tachiyama

A patent attorney by day, Eide began running on his lunch breaks about four years ago. After completing his first ultra two years ago, he now averages about one per month. He describes running his first 100-miler last year, the Cascade Crest 100 in Easton, Washington, as “more of a crazy adventure on the trails than a race or run; looking back, it feels like I laid down months or years of memories during those 24 hours.” He is a father of two kids, aged seven and eight.

We took a few minutes to chat with Eide about his running background, motivation for wanting to run Leadville and passion for running the Bay-Area trails.

How long have you been running trails?

Initially, I was running on a treadmill during my lunch as an efficient cardio workout and eventually started running some of the local trails in the Palo Alto Baylands and foothills on the weekends. It wasn’t until 2010 that I ever ran over five miles, but after almost every run I thought I could run farther. I’m lucky to have discovered trail running while living in Northern California, where you can pick from a couple ultras almost every weekend. I was added to the Inside Trail Racing team this year and have had a lot of fun supporting them and running their events.

Why Leadville?
Leadville has always been on my bucket list of 100s because of the race’s history and stature. I’m also excited to run the course with Scott Jurek, someone I’ve always admired.

You’ve got about 10 weeks to get ready! How do you plan to train?
Well, I’m running the Tahoe Rim Trail 100-miler just four weeks prior, so I’ve been ramping up for that already. Really I need to figure out how to recover in those four weeks between events . I’ve run a 50K and 50-miler a couple weeks apart, but this will be more substantial.

Anyone planning to come out with you to Leadville this year?
My wife will come for sure. She’s excited, and she’s crewed me before. Turns out I actually know five or six other Bay Area runners who will be running, so I will see some familiar faces.

Favorite aid-station food?
I stick pretty heavily to gel and carb drinks, but when I do eat on cold days it’s boiled potatoes, and on hot days, watermelon and popsicles. At the end, beer and cookies.

Any other running-related bucket-list races or goals?
I would love to run Western States (I’m a two-time lottery loser), Comrades and HURT.