Anna Frost runs with a vengeance

In a typical road marathon, the men’s winner crosses the finish line and … 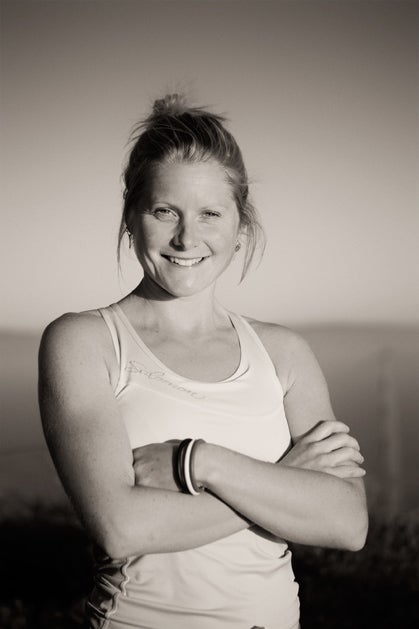 In a typical road marathon, the men’s winner crosses the finish line and, 20 to 30 minutes later, the women’s winner finishes. In a race twice the distance, you would reasonably expect the gap to double. Anna Frost, 30, of Dunedin, New Zealand, apparently didn’t get that memo before The North Face Endurance Challenge 50-Mile Championship (TNF 50). Finishing 36 minutes behind the men’s winner, Mike Wolfe, Frost set a course record and became the first woman to run the 51.2-mile course (with a net gain of 10,000 feet) in under seven hours—a time barrier that less than 10 men had broken before this year.

Following the race, I spoke with Frost, who was staying in a rented house alongside the course, overlooking the San Francisco Bay area. She sat with a pint of Ben and Jerry’s on the table in front of her, spooning portions into a bowl before eating them. Eventually, she bypassed the bowl.

Though Frost (“Frosty” as she introduces herself) and I have been on the same team for the past three years, it wasn’t until we raced (multi-day, teams-of-two) 2011 Gore-Tex TransRockies Run in August that I witnessed her fierceness. What I saw in those six days, up close and personal, was the very definition of fierceness.

By the sixth day, our cumulative lead had increased to an hour over second place.  Five miles from the finish line, she was breathing laboriously, sweating, red and visibly suffering and I suggested, maybe, you know, taking it easy for a little bit. Addressing the hill or the trail, Frosty swore something awful, bent to it and carried on. A 95-percent effort does not mean anything to this person.

Over the past several years, Anna’s successes have stretched to most continents and covered terrain equally as varied. She won the World Mountain Running Grand Prix Series (2008), was a top-10 finisher at the World Mountain Running Championships (2009) and finished second in the World Sky Running Series (2010). In December of 2010, Anna won the TNF 50 Championships—her first ultramarathon.

At the 2011 TNF 50, her second ultramarathon, Anna passed me 29 miles into the race. “Just giving this hill a bit of hell,” she said as she went by. She had trimmed down (12 pounds she told me later) in five weeks for this race.  She urged me to tag along with her pace, which I did … for 30 seconds.

Was holding off until TNF50 to lose weight part of a year-long plan?
No, no. If my year had gone as planned, then, yes, that would have been part of it, but I got injured. Twice. Six months following the 2010 TNF50 I stopped getting my period. Shortly after, I got a stress fracture in my ­­­­­heel. My physical therapist said, “You choose—you can be fat and fit or you can be lonely, skinny and broken.” I put on one kay gee [kilograms—2.2 pounds] a week until my period came back.

I knew that I had to get much of the weight off for TNF50, and would have preferred to lose it slowly. But due to the timing, I was losing a kay gee a week. I think that it was on the verge of unhealthy.

How did the 2011 TNF 50 compare to the same race, in 2010?
Last year, I suffered—physically and mentally. I wasn’t confident. It was a strange place for me.

In my second go, I was expecting to experience that lull again. I knew it might come and wondered if I could push myself out of it, but it never came. I thought that mental place was somewhere you had to go. When you’re in that space, you’re in la la land. I almost felt a little let down when it didn’t come.

And did the 10 grand first-place prize entice you back to TNF 50?
The money is never a driving force for me. I enter a race for the trails, the experience and the competition. I live a simple, non-materialistic lifestyle. I don’t own much—apart from a van, a car and a bike. And that’s why I love trail and mountain running—the simplicity.

What was your training like going into TNF 50?
In July I was shit racing. In August I ran TransRockies—too much, too hard, too soon. I got injured again, this time my knee. I had to take September and most of October off, which left me with five weeks of training.
My typical week involved three 4.5-hour long runs among shorter runs, and weight lifting, biking and core training. I was training up to five hours a day.

Who or what inspires you?
Kilian [Jornet, see “Just Kilian,” December 2011, Issue 76] has inspired me to try new distances. He’s made it seem so easy. I asked him, “Why run an ultra?” and he said, “Why not?” I figured, if he can do it, I can at least try. But more than anything, it’s the trails and the mountains that inspire me. You feel free.