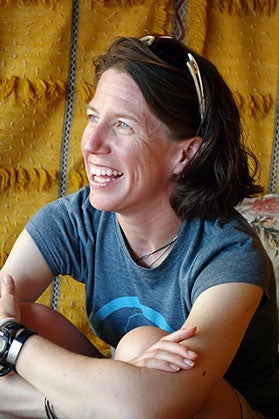 Meghan Hicks fell in love young, at the age of 21, just out of Beloit College in Wisconsin. Her relationship began while working in Big Bend National Park in west Texas, and she cultivated it for five years, all the while getting to know her suitor though on- and off-trail exploring. “When you allow yourself to ‘know’ something, you allow yourself to love it,” she says. “I love deserts!”

Hicks grew up in the green forests of New York and Minnesota, but the southwest desert sang an alluring tune to her. Now, 34, living in Park City, Utah, Hicks has continued her desert love affair. Her most intense affections have been for the famed Marathon des Sables (MdS), a seven-day stage race that takes place in the Sahara Desert of Morocco (see “Sahara Survival,” December 2012, Issue 84).

Hicks, a Trail Runner Contributing Editor, has now ticked four MdS finishes, 2009, 2010, 2012 and 2013, with this year’s race—the 28th edition—featuring an unexpected victory. Here, she shares her desert secrets and the long path that led to this year’s “near-perfect” race.

What is so appealing about the desert-stage-racing format?

Stage racing is appealing because you spend an extended amount of  time traveling through a wild place. You see all the sunrises, sunsets. You recognize the song of the first birds in the morning. You learn when in the evening the wind dies down. You become a part of it. When you go home, a small piece of it has somehow incorporated itself into you.

I haven’t found myself having such close exchanges with the environments of other ultras, like 50Ks or 50-milers. In stage racing, a moment extends into a week.

What has most struck you about the Moroccan people?

Over the years, I’ve made Moroccan friends, local runners who do the MdS. In America, we’re so distracted by smartphones and being busy. In Morocco, people spend a couple hours a day with each other and no one stares at smartphones during that time. And there’s a kind of affection that friends share there, sort of like brothers and sisters here in America.

What led to your MdS win this year?

My training was better. For the last four or five months before the race, I was niggle-free. I could essentially run as many miles as I wanted. In all of my previous MdS trainings, training with the extra pack weight had caused some sort of injury that became my limiting factor.

Most good 100-mile runners “get good” after much trial and error, and I think the same is true with stage racing.

Did you go into the race gunning for the win?

Winning has always been on my mind since  I finished second in 2009, but it seemed a far-fetched dream. I believed [French runner] Laurence Klein was unbeatable—she had three wins at the MdS. Laurence always goes out fast, so I knew I would have to run my own race.

I loved the folks with whom I shared a shade tent, Tent #58, at the bivouac each day between racing. There was a lot of laughter and even more of, “How are you doing? How can I help you?”  If this type of energy could be transferred to the real world, well, the potential of the human species would be boundless.

At the finish line, after I’d done some interviews and chatted with folks, I had a little quiet time  in my tent. In that moment, I missed my dad terribly. He’d drive for hours to come see me run a 400-meter race in high school, a tennis match in college or a marathon after college. He didn’t really care if I did good or bad; he’d cheer and take photos and obsess over his daughter just the same. Lying in my tent, I wished he was still alive so I could see the look on his face.

What is on tap?

I go on an annual backpacking trip with friends, and we just drew up our itinerary and got a permit for 125 miles of deep Yellowstone backcountry. The stoke factor is high!

A friend and I got the idea to link up a bunch of peaks roughly connected by a many-mile- long ridgeline here in the Wasatch Mountains, probably a two-day fast-and-light-style run/hike.

I’ve got a solo, multi-day fastpack on the calendar, and can’t decide which trail.

But the big question is: will I return to MdS? As of now, I’m undecided. I had a near-perfect race. I accomplished a dream. Can it get any better?