Meghan Arbogast may have been old enough to be the mother of many of her competitors, but that didn’t stop her from … 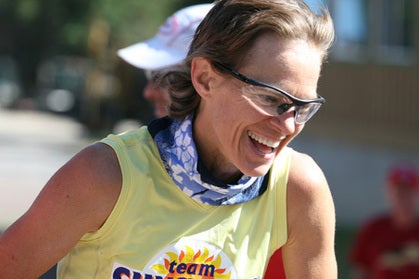 Meghan Arbogast may have been old enough to be the mother of many of her competitors, but that didn’t stop her from claiming two national titles last summer at the USATF 50-mile trail championship and 100K national road championship. While friends describe her as “motherly and easy-going,” underneath the mild demeanor is a highly trained athlete, calculating splits and heart rate, and monitoring hydration and caloric intake. “When we race together I never feel like she’s racing against me,” says fellow Team Sunsweet member, Beverly Anderson-Abbs. “We’re just friends out for a run, chatting about our families.

While trail ultras let her hone her endurance, Arbogast hasn’t sacrificed her road speed, and in October, pumped out a 2:45:46 at the Twin Cities Marathon, coming within seconds of her lifetime marathon PR. There she was crowned the national Women’s Masters Marathon Champion and qualified for her fourth Olympic Marathon Trials (to be held in Houston, Texas, in January 2012). Had she been a few months older, Arbogast would have surpassed Joan Benoit Samuelson’s national age-group record by more than two minutes.

Despite her success on the road, trail running remains her passion. “It’s gentler on my body and I like getting away from traffic,” she says.In November, Arbogast represented the U.S. at the International Association of Ultrarunners (IAU) World 100K championship in Gibraltar for the third time, finishing third in 7:46:01, another personal record.

Throughout last year’s rigorous training, travel and racing, Arbogast was the primary caregiver to her husband of 25 years, Brian, until he died in August after a long battle with brain cancer. Throughout it, Arbogast remained upbeat and positive. “It was amazing that she was able to train at all, much less at that high threshold,” says friend and frequent training partner Craig Thornley.

I shoot for 110 to 120 miles a week, doing half of that mileage between Monday and Friday. I rarely double [run twice in one day]. Wednesdays I run up to 16 miles including a speed workout and long cool down. On the weekends I divvy up the remaining mileage by doing either 30/30, 20/40 or 10/50. I rarely take a day off.

How do you recover from an ultramarathon or big training weekend?

I pay close attention to how my body responds and modify my diet or training accordingly. My mileage is generally consistent to maintain a good base, which seems to work well for me because I haven’t been injured in years. On recovery days, I run easy, from nine- to 11-minute-per-mile pace. I avoid processed food but otherwise eat just about everything—meat, vegetables and fruit.

Why was Western States your favorite race of 2010?

I experienced a miraculous comeback late in the race. From Foresthill to the river crossing (mile 62 to 78) I didn’t feel very confident and the heat made me nauseated. I popped several salt pills, which helped to settle my stomach. After crossing the river, temperatures cooled down a little and I came back to life and passed two women and held off two more. The result was my best finishing time ever at Western States [19:15:58] by well over an hour.

How did you manage caring for your sick husband while running at such a high level?

Running helped me cope tremendously with his dying process. Running gives me a calm, focused mental state as well as an extended, caring family of runners who supported me during his death and the aftermath. Without them I would feel very lonely.

What health-care practices are most important to you as an older athlete?

I get a massage every week and physical therapy every three to four weeks for my low back. I also get acupuncture every two to three weeks and take lots of vitamins and Chinese herbs. A nutritional chemist recommended I take a B-complex vitamin, DHL nanoplex and Coenzyme Q10 to improve my energy. I also take fish oil, calcium, vitamin D and a green-tea extract. Caring for an aging body is like maintaining an old car; you have to take it to the shop often to keep it running well.