For Stephanie Howe, the key to running well is not running—at least part of the year 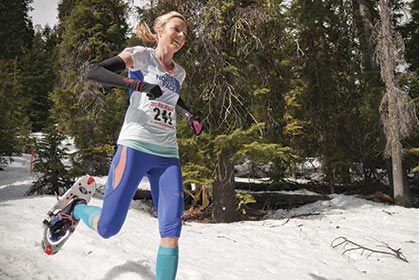 Stephanie Howe has a training secret. But it’s not what you might think.

And she attributes much of this success to running very little during the winter. “I usually race in December, then shut it down for two or three months depending on snow,” says Howe, 30. “I don’t like to force myself to run when it’s icy and zero degrees. It’s not fun.”

Luckily, winter provides plenty of other outlets for her love of the outdoors—as well as for her off-season fitness.

Growing up outside the frigid Twin Cities, Howe was on cross-country skis from a young age and skied collegiately at Northern Michigan University. She has also incorporated backcountry skiing and snowshoeing to stay fit and enjoy the winter without the burnout or pounding brought on by year-round running.

We caught up with Howe to ask about her approach to winter cross training and her advice to runners looking for alternatives once the snow flies.

Why is a winter break important to your training?

During the winter, I’ll run two to three times a week, but only if it’s nice out, or if there’s a group run, or something like that. Only for fun.

This helps me stay healthy and makes me crave running again. If I have any lingering aches or pains in the late fall, taking those two months and not really running makes them go away, and I feel like my body is healed and healthy. That’s really important. If you don’t give your body a break, those things get worse and that’s when serious injuries happen.

Why is Nordic skiing a good winter-running alternative?

I ski at least twice a week and it’s the best cross training. The gliding is a nice break from the pounding of running. The strength that it builds, especially in the upper body, makes me a better runner. Running is a catabolic activity, where you break your body down, while skiing builds it up.

If runners want to start skiing, where should they start?

Consider whether to try classic or skate skiing. The gliding with classic is similar to running, and is easier to pick up, while skating is faster, with more power. You can do both and they’re good for different purposes.

Also, take a lesson on the technique. It’s a steep learning curve and can be frustrating and not fun if you don’t learn technique. A lot of places will offer a lesson if you rent equipment or buy a pass.

Speaking of equipment, where should people start with skiing gear?

It’s crazy that you need all this stuff, compared to a sport that only requires shoes! But it’s worth the time and money to get ski gear that works. It has to fit you. For example, if the skis are so stiff that you don’t compress the wax pocket onto the snow, you’ll just slip all over the place.

You also do some ski mountaineering and snowshoe racing?

I do some backcountry skiing for recreation. I don’t skimo race but I’d like to. There’s not as much technique involved as Nordic skiing—with an alpine touring setup, you work really hard to skin up the hill and enjoy the run down.

I’ve snowshoe raced twice. In 2013 the U.S. Snowshoe Association National Championship was in Bend, which was also hosting a qualifying race a week earlier. That qualifier was my first time on snowshoes, but I won, and then won [the 10K race at] Nationals (pictured) a week later. So I figured I should retire from snowshoe racing, since I couldn’t do any better!

What other advice do you have for someone looking into winter-running alternatives?

Check out a local store to see if they have any information on local groups. Finding people to do things with can really get you into it.

Why You Should Try Snowshoe Running This Winter