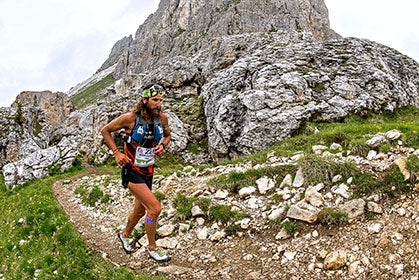 Anton “Tony” Krupicka may be one of the most recognizable faces in trail running, and not just because of his beard and long hair. Since breaking onto the scene in 2006, at age 23, with a first-place finish at the Leadville Trail 100, Krupicka has floated to podium finishes at many of the country’s major ultramarathons, including the 2007 Rocky Raccoon 100, where he set his 100-mile PR of 13:18:52, and the 2010 Western States Endurance Run, where he placed second.

Lately, though, Krupicka’s once illustrious career has stalled due to injury. In particular, a stress fracture in his tibia, or shinbone, has been present on and off for the last four years. Last summer, after several relatively pain-free years, the fracture worsened. Krupicka persevered through Europe’s Ultra-Trail du Mont-Blanc in August, and, this year, earned a sixth-place finish at the Transgrancanaria 125K in March. By last month, though, his shin was so painful he could hardly walk.

With July’s Hardrock 100, which Krupicka is signed up for, now nearly out of the question, the past several months have been a lesson in patience, as the longtime runner has had to find alternatives to his mainstay sport.

“Before 2011, I was so stubbornly focused on just running,” Krupicka says, “but recently my body hasn’t been able to weather that kind of abuse anymore, so I’ve learned to find satisfaction and inspiration in other activities.”

At this critical juncture in his career, Krupicka spoke to Trail Runner about what the other sports he’s been pursuing and what running means to him now.

For more on Krupicka’s relationship to running and injury, check out this recent video profile by Billy Yang, which follows the runner around for a day as he reflects on his career, past and present.

Krupicka on biking: My freshman year in college, in 2001, I had a stress fracture after the cross-country season and a friend lent me his road bike. Biking quickly became my go-to cross-training activity for when I was injured. My bike was stolen in 2006, so I hadn’t done much cycling since then.

I don’t have much structure to my biking. I just go ride for a bunch of miles or hours. If my legs are feeling good, I head into the mountains for some big climbs. Typically, I’ve been doing a couple back-to-back 100-mile days followed by a couple easier days in the one-to-three-hour range. I find that I’ve been approaching biking in a similar way that I do running: if I feel good I put in a hard effort, if I’m tired I back off the intensity. Your body can handle a lot more biking, day after day, than running, because there’s mechanical advantage and no pounding.

On core/stability work: It’s all pretty basic stuff meant to strengthen the hips and pelvis in an effort to keep things further down the chain (like my shin) from injury: clam shells, leg lifts, one-legged squats, balance drills, planks, etc. It’s nothing groundbreaking, but the trick is A) having the discipline to spend the extra 10 to 15 minutes focusing on it after a run, and B) focusing on correct form, so that you’re actually recruiting the right muscles and not enforcing bad habits.

On skiing: I started skiing back in my freshman year of college, but was too focused on running to ever commit to it time-wise or financially. I finally bought a lightweight [ski-mountaineering] set-up last year with the intention of taking some of the pounding off my legs during the off-season, and to become a more well-rounded mountain athlete.

This winter I was mainly focused on racking up vertical gain. I didn’t ride a lift all season. A typical session is multiple laps of a 2,000-foot climb: skin up in 40 to 45 minutes, zip down in five minutes and repeat at least three times. I often put in 10,000 feet of vert, with my biggest day being 12,000. Usually, I’d put in a hard effort on the up, and call it a day when my uphill splits started slowing.

Skiing helped build fitness without pounding the legs. For the two months before the Transgrancanaria 125K in March, I averaged a paltry 38 miles per week of running, but with the skiing and scrambling I averaged 40,000 feet of vert per week.

On climbing: I learned how to climb at an area called the Garden of the Gods, in Colorado Springs, when I moved there in 2001 for college. I was attracted by the adventure of it, and the novelty of getting to the top of giant rock formations under my own power. After a five-year break, I started climbing regularly again in 2011 while recovering from a broken leg. Living in Boulder, my motivations were similar: the Flatirons are a striking and inspiring set of rock formations.

I would say that technical rock climbing has almost zero positive effect on my running and racing ability. However, it has 100 percent benefited my running mindset, in that it has vastly expanded my options in the mountains and has allowed me to see them with completely different eyes. Now, a long outing in the Flatirons combining running and scrambling is my absolute favorite thing to do.

On broadening horizons: Since I broke my leg in 2011, I’ve been gradually expanding the scope of what I see as valid, rewarding activities in the mountains. Running used to be my main motivation and goal. Now, the landscape and the experience—the mountains—are my primary motivators. Running becomes just another tool in the pursuit of light, fast, efficient, self-powered movement in the mountains.

With this most recent [shin] injury, I’ve been particularly inspired by Canadian ice climber Will Gadd. He says, simply, Move. Every day. You’re an athlete, so you must use your body. If one activity aggravates an injury, do something else that doesn’t.

With this stress fracture, I can’t run, I can’t scramble and I can’t ski. But I can bike my brains out. I can climb. I can do pull-ups. I can re-dedicate time to doing the core and hip-stability work necessary to make me less prone to injury. I can still get out in the mountains every day and use my body. That is ultimately what nourishes me.

On merging climbing and running, as outdoor athletes like Dean Potter have done:

[Editor’s note: Dean Potter died May 17 during a wingsuit BASE jump, after this interview transpired]

Dean Potter’s FKT [fastest known time] on Half Dome is the perfect example of how running and climbing can merge. FKTs on peaks like the Grand Teton or Longs Peak are other examples. There are also countless link-ups and ridge traverses that require a similar blend of speed, endurance and climbing competence. These are currently the most inspiring things in the mountains for me.

People have been trying to run up and down mountains quickly for a long time. Often, that has required some climbing. Speed attempts on Longs Peak have been documented since at least the 1970s and 1980s, and likewise with the Grand Teton. People were timing themselves on car-to-car ascents of the major Flatirons during the 1980s. Dean himself was trying to do Snake Dike and other long, moderate routes quickly, car-to-car—i.e., using running on the approaches and descents—since at least the late 1990s. His route on Half Dome is aesthetic and logical in that it takes the most reasonably direct lines up and down the formation rather than the contrived, spiraling, easiest route that is the hiking trail.

I hope to attempt such feats myself. I will say, though, that I don’t think something needs to be an FKT for it to be interesting. I think what’s important is the creativity and the style. Approaching a mountain objective with an open mind, a light-and-fast ethic and an appropriate skill set can lead to all kinds of fun projects.