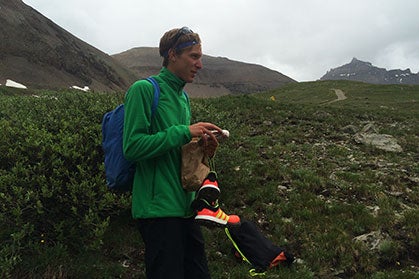 Andy Wacker, 26, has transitioned from track and cross country to trail and mountain running with great success. Here, he takes a break during Trail Runner‘s 2015 Photo Camp. Photo by Paul Cuno-Booth

Andy Wacker’s best race this season was the one he showed up to seven minutes late.

In July, Wacker inadvertently gave the whole field a substantial head start at the Barr Trail Mountain Race, in Manitou Springs, Colorado, after an alarm-clock snafu. But Wacker reeled in every single runner over the 12.6-mile course, snagging the win by about eight seconds.

He does pretty well when he gets there on time, too. At last year’s Pikes Peak Ascent—which doubled as the World Long Distance Mountain Running Challenge—Wacker led from the start in Manitou Springs and up most of the 7,815-foot climb that ends near Pikes Peak’s 14,115-foot summit. But he bonked hard before the end, fading to third.

This year, at the same race, Wacker, now 26, again led from the gun until the tree line, around mile 10. Again, he struggled, bonked and even went slightly off course; by mile 11, eventual winner Touru Miyahara passed Wacker, who held on for second this time.

“I wish having [already] run the race helped me, but really it just allowed me to know and respect the pain and challenge that was awaiting me,” says Wacker. “I didn’t get any training on the top half of the mountain this year and it really made it hard the last few miles.”

Wacker, a former All-American distance runner for the cross-country powerhouse University of Colorado (CU) Buffaloes, is having an ascendant couple of years in the mountain/ultra/trail (MUT) racing scene. In July, representing the United States in the World Long Distance Mountain Running Championships, he placed second at the Zermatt Marathon in Switzerland, and later that month won Barr.

We caught up with Wacker, who lives in Boulder, Colorado, about his experience at Pikes, how he’s been able to take to the MUT scene so quickly and what’s in store for him next. (The short answer is, Yes, he’ll be taking a crack at an ultra—and soon. On Saturday, he’ll race the Tamalpa Headlands 50K.)

What’s your running background? It looks like you’ve been at it a while.

I started running—well, training for running—in seventh grade. I was competing against high schoolers, since I went to a tiny private school in North Carolina. I loved climbing trees and wandering around in the woods as a child, so cross country came naturally. Without knowing what the word “varsity” meant, I did pretty well and was hooked for life.

How did you first get into trail racing? Was trail running already part of your training regimen, living in Boulder?

My college roommate and CU teammate Christian Thompson first told me about mountain running, as he’d competed in the World Junior Mountain Running Champs in 2007, our freshman fall.

Even before then, I’d loved meandering along singletrack and, being a masochist, running up big hills. I got into running up 14ers [peaks at or above 14,000 feet] during the summer, in college, preparing for cross country. I am just too impatient to spend all weekend hiking, so I usually plug into a book on tape and go out and run. It’s great for wildlife photography, too.

I was somewhat tricked into entering the Mount Evans Ascent last year by my friend and training partner Jeff Eggleston, who called it a “hill workout.” That really got me into this mess, qualifying me for Pikes Peak and the World [Long Distance] Mountain Running Challenge last year.

This summer is the first time I’d say I really started focusing specifically on trails, but really all I’ve been doing is racing a trail race every weekend and having fun. It’s basically mountain sightseeing.

You seem to have adapted to it really well. Do you think you have any particular strengths that play into the trail and mountain stuff?

Mountain running plays to my strengths as a runner. I am pretty light, so that makes me a natural climbing specialist. At CU, I was always the guy running up and down Flagstaff Mountain on easy days instead of staying flat. Life’s too short to run loops on a field. The trails just make it more fun.

Take us through this year’s Pikes Peak Ascent, where you led for a while before eventually finishing second. What were some highs and lows? Did you set your alarm correctly for this race?

I got up on time: 4 a.m., two alarms and a bunch of snarky texts from friends. I made it to the start line early and warmed up well.

I went out hard, maybe even faster than last year, leading from the gun to mile 11. My splits indicated that I would finish about 2:09, optimistically.

Touru [Miyahara], the Japanese runner who ended up taking the win, was about 30 seconds behind me from the start until A-Frame [mile 10 and the tree line]. At that point, I started to really struggle. I was thinking to myself, the whole race, all you have to do is run every step and you’ll win. At A-Frame, you come up on this loose gravel and ungodly steep terrain. I started walking. On top of this I went slightly off course, taking, perhaps, a steeper route. Touru followed, so no lost love there.

So a mile later, when Touru passed me running, I knew the race was over. I was toast. I telescoped in on each step, holding on to rocks as I climbed over them. Being grateful to cross the finish line is an understatement.

On that note it was probably only the third worst bonk I’ve ever had, following last year’s Pikes Peak Ascent and the Zermatt Marathon this year.

Oh, I forgot highlights. Well, I’m motivated to win this race more than ever. I know that I’ll have to train more specifically, especially at elevations eclipsing 11,000 feet. I feel more invigorated and rambunctious than ever to hit the trails and really get fit for my upcoming races.

Since the race I have run pretty hard. Thank goodness uphill is easy to recover from. I ran one-third of the way up Pikes on Sunday [August 17, the day after running the Ascent] and cheered on the marathoners.

What’s on your calendar for the rest of the year? Next year?

After that, I’ll be back to focusing on running sub-1:03 for the half marathon on the roads and preparing for the US Olympic Marathon Trials.

I can’t stay in one discipline or distance too long without getting a bit bored. I have plans to run road and cross-country races in the fall, and maybe even go back on the track in the spring before returning to mountain/trail next summer. Watch out racers, from downhill miles to ultras, I may show up seven minutes late to spoil your day. Well, technically, if I show up seven minutes late to a mile race …