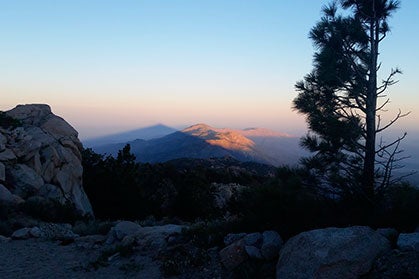 On the night of May 22nd, 2015, Nickademus Hollon and his girlfriend, Jade Belzberg, saw an improv-comedy show in downtown San Diego, California. Immediately following, Hollon—a 24-year-old ultrarunner with a peculiar attraction to heinous terrain—hopped in his Jeep and headed northeast toward the rugged Santa Rosa Mountains for a traverse of the range.

Like all good ideas, the plan was hatched in a bar. In January, Hollon was enjoying a beer with two friends and fellow runners, Greg Wagner and Robert Hunt, when the Santa Rosa Mountains entered the conversation. The range, well-traveled by Wagner and Hunt but relatively unknown to Hollon, seemed like a fun place to explore and attempt a new fastest known time, or FKT.

Appealing to Hollon because of its remoteness and lack of trails, the Santa Rosa range begins just west of the Salton Sea in Southern California, jutting thousands of feet out of the desert floor and crawling northward to its high point, 8,717-foot Toro Peak, more than 30 miles away as the crow flies. Though there were some online records of people completing a full traverse of the Santa Rosas, Hollon could find no evidence of anyone having done it in a day.

Four months later, after leaving the comedy show that night, Hollon rendezvoused with Hunt in a Starbucks parking lot north of San Diego. It was 2:40 a.m. by the time they shuttled a car to the northern end of the range and drove back around to their starting point in the south, on Highway S22 near Borrego Springs. After a solid 20-minute night’s sleep, Hollon and Hunt packed up and headed toward Rabbit Mountain, to start what would be a 41.8-mile, largely off-trail traverse with 14,755 feet of elevation gain.

Nineteen hours 59 minutes later, they re-emerged from the chaparral forest at the northern end of the Santa Rosas, setting a new FKT by about half a day. Trail Runner recently caught up with Hollon to talk about the adventure and why he finds gnarly FKT endeavors so appealing. 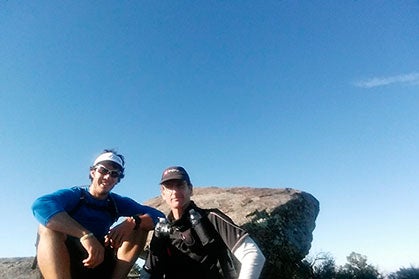 For a lot of the traverse we were finding trails that maybe a rabbit would have taken. Robert and I were trying to find those, often on our hands and knees, crawling over and under the scrub oak, moving at a quarter-mile per hour for some parts. It’s just horrible, gnarly, rocky terrain intermixed with cholla cactus and all sorts of different yucca ready to stab you at any turn.

Stepping beyond Rabbit Peak, it was really evident that no one had been up there. There are just so few people that come through. It was a vast ocean of manzanita and scrub oak. And, of course, the ridges are never just flat. Going from one “peaklet” to another, we would take a couple minutes to plan a route—left of that manzanita, right of that scrub oak, under that boulder. We would try to memorize a semi-efficient line to use through the bushes but that would fall apart in five minutes. It was that on repeat.

Your original time goal for the traverse was 12 hours. Were you disappointed to miss the cutoff?

When I saw that the range was only 35 miles long, I actually thought 12 hours would be a conservative time estimate. Robert and Greg, who had been out there and done those mountains a lot, laughed at my time estimate because I clearly didn’t know the terrain.

I wasn’t too focused on the time, but I packed water and food for 12 to 15 hours. I was more concerned on just completing the traverse, though I definitely wanted to finish in less than 24 hours. To our knowledge, no one had ever done that. 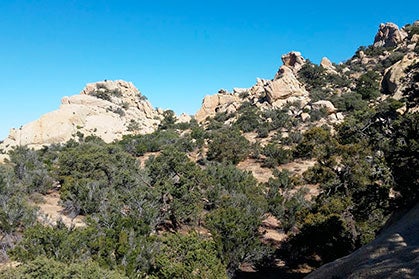 One of the sparser patches of chaparral forest in the Santa Rosas. Photo by Nickademus Hollon

Aside from terrain, what else added to the difficulty of the traverse?

Most FKTs will readily have trail access, fire roads out, and a creek to fill up your water. Out here, we’re already in a drought, all our creeks are already dry and we’re in an area that hardly sees any rain. So the whole paradox to this thing is you want to move as quickly as possible, as light as possible with as little water as possible, but each second that we take on the ridge analyzing the terrain is another minute that we’re spending out in the heat, under the sun, and sipping down our very finite amount of water. Both of us were out of water with 10-plus miles still to go.

Did you ever consider quitting?

The traverse was not the kind of thing we could easily quit. When we got to Dawn’s Peak [the third out of five], we couldn’t just say, “We got to here today, let’s just quit and be done.” Quitting at that point meant a seven-hour hike back to the car or descending down into Clark Dry Lake and trying to cross a 100-degree salt flat. You might as well go forward, because quitting would be just as hard. At least, that’s what I convinced myself. 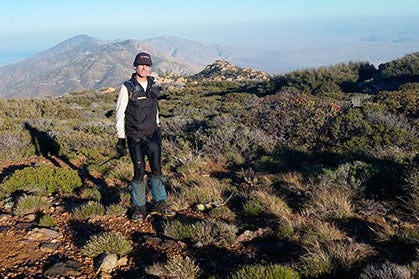 Hunt up high in the trail-less chaparral of the Santa Rosas. Photo by Nickademus Hollon

When I’m with someone else, usually we can bounce off each other’s morale. When one is high, one might be low, and vice versa. The lowest point in our traverse was probably climbing up the Alta Seca Bench towards Toro Peak. I thought I saw a trail to the right, only to be duped on a horrible ridge that led us way off of the main trail through nothing but pure bushes. Mistakes like that can be dangerous when you’re far from civilization and have a limited supply of water and food.

You know you’re at the low point when there’s no conversation, both heads are down and you communicate in grunts. We essentially went for three hours like that without speaking to each other. It’s in those moments that I actually wish I had popped out my camera and filmed, but of course that’s the last thing you want to do right then. 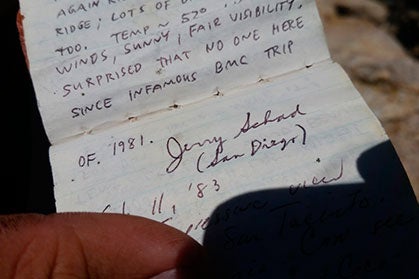 A 1981 entry from Jenny Schad (author of the hiking guide “Afoot and Afield in San Diego”) in the register atop Dawn’s Peak. “I could count all the entries of people who’d been up there on two hands,” says Hollon. Photo by Nickademus Hollon

What was the high point of the traverse?

Toro Peak came close to the end, and was the highest of all the peaks we climbed. It marked this cool transition: finally, we were in pine trees! It was beautiful up there. We also finally reached the fire road, and it was so good to stride out again. It felt like getting back to pavement after driving on a dirt road for a hundred miles.

We got to the top of Toro when the sun was just going down, and at that time pretty much all of San Diego had this massive inverted marine layer above it, hanging around 5,000 feet. From 9,000 feet, we could see the rain shadow effect in action: the cloud layer rolled off of the mountains and just disappeared into the desert. 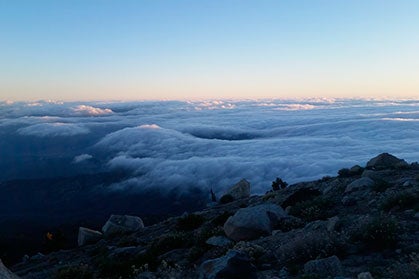 A cloud layer cloaks San Diego County, as seen by Hollon and Hunt, a few thousand feet up. Photo by Nickademus Hollon

Why do find this type of terrain so attractive?

I’ve always been attracted to something that few people (if any) have ever done. I like Barkley [a brutal 100-mile race in Tennessee with 60,000 feet of gain and a good deal of bushwacking; see “Out There” in our special April 2015 issue DIRT for the full story of Hollon’s Barkley obsession] because there aren’t too many people who are going out there doing these extreme races. So the Santa Rosa traverse was really attractive. Through all the research I’d done there were maybe 10 people who had done the traverse over one-and-a-half- to three-day, to five-day, backpacks. To me, it was a gnarly attraction. The Santa Rosas also create a very aesthetically pleasing line that runs straight from the southeast to the northwest.

Sometimes being restricted to the trails that are raced on, ones that get high traffic, you kind of skirt by the cool and beautiful places and you say, “Oh it’d be cool to be up there, or to connect that with that.” Instead of just talking about it, I actually get to do it. I love just being out there; everywhere you look, you can see hundreds of miles. I am attracted to that kind of terrain, especially the vast, open deserts.

Do you enjoy more traditional ultramarathons as much as these self-designed FKTs?

You also have to commit to spending some time researching what you’re doing. It’s really easy to get excited and to spend hours on the trail getting stronger, and then skip doing the proper research for the FKT. 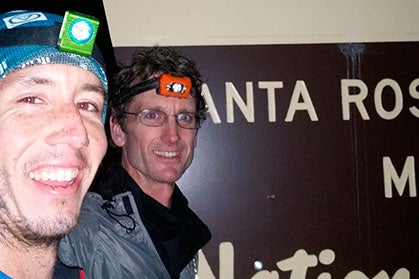 A triumphant Hollon and Hunt after a long day. Photo by Nickademus Hollon

What’s next for you?

I had plans this year to do Nolan’s 14 [a Colorado adventure run that climbs 14 14,000-foot peaks] in early July, but late May snow has completely corniced and iced all the 14ers. So Nolan’s isn’t happening. My plan B was signing up for the Speedgoat 50K [in Utah] in July and then the Fat Dog 120 [in British Columbia] in August.

In terms of projects, my main one of the year is going to be in December, here locally in San Diego. I’m calling it the “100 in 100.” San Diego County has 100 publically accessible peaks, which equates to about 400 miles of trails and about 180,000 feet of gain. I saw that list and instantly thought, How is it possible to do them all in one go? So that’s the idea: 100 peaks, 100 hours. It’s an insane time limit; it’s close to four miles per hour, over horribly gnarly terrain. In terms of elevation gain, it’s more than two Tor des Geants [a 205-mile race in the Italian Alps with 78,000 feet of gain and a 150-hour time limit]. It’s a massive undertaking.

We’re still in the process of finding the foundation to partner with, but we’re looking to address obesity and Type 2 diabetes risk in San Diego County. We want to fundraise and raise awareness for that.

What would your advice be to an aspiring ultrarunner?

Take your time getting into it. Enjoy the marathon distance and the 50K distance. Don’t jump right to 100 miles. Go for the races that really attract you. Don’t settle for the flatland 50K because it’s local and easy, if there’s one that looks challenging but you really like the terrain. Spend your money and spend your training on something that will really fire a passion in you.