Megan and David Roche might be the busiest, most productive and fastest couple on the trails 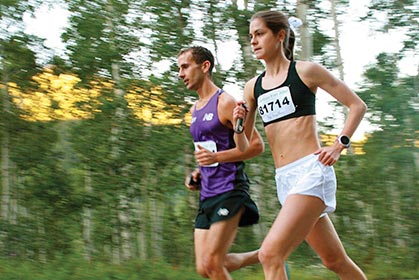 Even for a married couple, Megan (formerly Deakins) and David Roche have a lot in common. The first thing you notice is that they can both talk at a million miles an hour; then you realize that’s the only way they can fit everything they do into a single day.

Megan is entering her second year at Stanford Medical School, and David is a staff attorney with the Environmental Law Institute, currently charged with opening a west-coast office for the Institute’s Ocean Program. On top of that, they are an absolute terror on the trails, winning and setting course records at multiple races this summer—Megan at the Don’t Fence Me In 30K in Montana, Roche at Pennsylvania’s Rothrock Trail Challenge 30K, and both of them at the Table Rock 27K in California and Jupiter Peak Steeplechase in Utah. To top it off, they both nabbed the final spots on this year’s U.S. Mountain Running Team.

The Sunnyvale, California-based couple got their fix of altitude training at their wedding on August 17 in a mountain meadow outside Aspen, Colorado, in a small ceremony with their families. Then it was off to Cassette di Massa, Italy, for a “working” honeymoon—aka the World Mountain Running Championships.

We caught up with Megan and David to learn more about their rise to trail-running prominence, their obsession with ice cream and how they manage a seemingly impossibly workload. 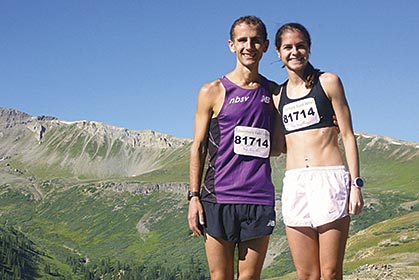 First things first: how did you meet?

David: Megan was a field hockey player at Duke and I was coming there for law school and a master’s degree. A mutual friend of ours whom I met in undergrad said, “You have to meet my friend down there, you’ll really hit it off!” This friend is really eccentric, so I wasn’t sure who I was going to meet.

So Megan and I corresponded on Facebook and cancelled on each other five times or so, but we eventually managed to meet at a frozen-yogurt place and we ended up shutting the place down. [Fittingly, the two are sponsored by the low-calorie frozen desert company Arctic Zero. “It’s 150 calories a pint, 14 grams of protein, non-dairy … basically it allows us to gorge our ice cream obsession in a way that makes us better runners,” David says.]

So as a field hockey player and a former college football player, how did you become runners?

Megan: We both ran before college. When I met David I was doing some road races with decent success, so I contacted the coach at Duke and walked on the track team the spring of my senior year. The coach suggested I take a fifth year and I did, so the next year I ran cross-country, indoor track and outdoor track.

David: Coming out of high school I was 200 pounds but my football career fizzled pretty quickly. My dad had always been into cycling so I got into that, then duathlons. I quickly whittled away all my upper body mass. Luckily I found a girl who doesn’t think biceps are a prerequisite.

When law school started I didn’t have as much time so I dropped cycling—it’s so much time and accessorizing—and was just running. Running is much simpler, especially on the trails. You just leave your door and go.

How did your attention turn to the trails?

Megan: This spring I did some smaller races and I realized how much more fun trail races are. I found out about the Don’t Fence Me In 30K in Montana through David and I wanted to travel and do a longer trail race. Travel is limited with med school and that happened to be a free weekend. The result for me [a win and course record] was a little unexpected.

You’re both insanely busy and yet productive and successful. Do you work together to find a good work, training and life balance?

David: Time management is easy when you have that support person who is going through the same thing. It all starts at 4:45 a.m. when we wake up and usually run together, though I usually require a massive cup of coffee first. We live the lives of old people with early dinners and getting to sleep really early; we’re creatures of habit and fall into habits we love. We’re very content doing the same thing every day. We’re lucky we found each other because we would drive anyone else up the wall.