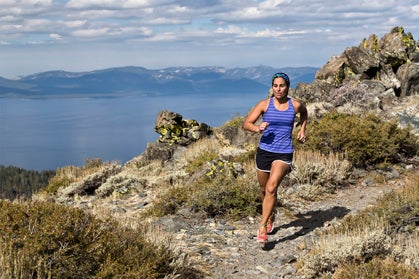 Monforte on the Tahoe Rim Trail. Photo by Dave Clock

The Summer of the Fastest-Known Time (FKT) has continued on into September.

She completed the 165-mile trail in 49 hours, 17 minutes, starting on September 5 (the same day as the inaugural Tahoe 200 race, though Monforte ran around the lake in the opposite direction) and finishing on September 7. According to the Fastest Known Time website, the previous women’s supported FKT was 53 hours, 39 minutes, set last summer by Jenny Capel, of Reno, Nevada.

Spaniard Kilian Jornet set the overall supported FKT on the Tahoe Rim Trail in 2009, completing it in 38 hours, 32 minutes.

We recently chatted with Monforte to learn more about the trek, her previous attempt, and what she has in store.

1. You attempted the TRT speed record in June as well, correct?
That’s right, but I didn’t finish. I was 20-odd hours in and hadn’t even taken in a thousand calories, so I looked pretty haggard and my husband, who was crewing for me, pulled the plug. Of course we had to hike six miles out then, so it was kind of rough.

2. That’s got to be deflating. What made you decide to give it another try?
I wasn’t planning on trying it again this summer but in August, my husband and I did the TransRockies Run as a team, so I knew my fitness was good. On top of that, I had gotten the weekend off to go do the Wonderland Trail, but the crew for that fell through. So it was last-minute but I asked some people if we could give it another go and they said “yeah.”

3. What motivated you to try for the FKT on this trail?
[TRT] is one of my favorite trails. When I started running, I was living in Reno, so I would drive up to it to run. Then we moved back here so most weekends I’ll go run there. I love it – you’re going around this massive, beautiful lake and you see these mountain ridges across the water. You say to yourself, “How do I get over there?”

4. Did you have a specific time goal in mind?
I didn’t. First and foremost, my goal was to finish it. The other goal was not to get lost. It seems everyone does when they’re out here and, being a local girl, I thought that would be pretty embarrassing.

5. How did things unfold once you hit the trail?
It actually went by quicker than I thought it would. As we were going we saw I might be close to the 50-hour mark so I picked it up a little. Then I had some asthma issues the last 40 miles, which dictated the pace from there.

There was a lot of suffering, but you have to embrace the pain. It’s going to hurt even if it goes well.

6. What did your crew do for you?
Since it was last minute, we didn’t have a big crew – one would pace me and the other would drive to the next point. For safety reasons and due to how it went last time, we planned on having a runner with me for every segment. Out of eight sections, I only ran alone for one, when I got in and my pacers looked beat. I told them to save their strength for the night section since they would be more valuable then. I usually like running alone, but in this case I enjoyed being with someone.

7. There is the obvious physical challenge of running 165 miles. What were some other challenges that went into pulling this off?
The biggest challenge was planning it and getting everything organized, and then letting everything go once I started and the crew was taking care of it. Leading up to that there was so much to do in terms of shopping, logistics, getting directions written down, etc.

8. Did you have any interesting encounters on the trail? Wildlife, other humans … humans that resembled wildlife, etc.?
The Tahoe 200 race was going on that weekend and we were going in the opposite direction, so we started seeing other runners about 15 or 20 miles out from the finish. It was really cool seeing them go the other direction. It was also cool to see the suffering that goes into a race that long. We came across a guy lying on the side of the trail in the fetal position – I wasn’t sure if I was hallucinating – and we asked him if he was okay. He said, “Yeah, I was just seeing things, so I thought I’d get some sleep.”

9. Do you have any plans to try and lower your time? Or do you have any other FKT attempts planned?
The TRT is my trail, but I think I’m done with trying for a speed record. I think that time will come down. There are definitely faster ladies out there, but I’m glad I accomplished it. I don’t know about another speed attempt somewhere else. TRT is here, though I love seeing new places. Trail running always takes me to really cool places.