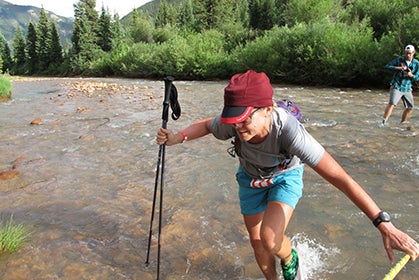 Betsy Nye on her way to another Hardrock finish. Photo by Helen Pelster.

Hardrock, in the San Juan Mountain Range of Southwestern Colorado, is North America’s most extreme 100-mile ultra in terms of climbing and altitude, with nearly 68,000 feet of elevation change at an altitude ranging from 7,600 to 14,000 feet. [See “My Summer at Camp Hardrock,” April 2014 Issue.] Its 23rd running takes place on July 11 in the historic mining town of Silverton.

In recent years, 12 to 15 percent of the annual 140 participants have been female. The event has 156 female finishes on record compared to 1,210 by men. Only 12 women have completed Hardrock four or more times, and coincidentally, the two who’ve done it the most share the same first name: Betsy Kalmeyer (14 times) and Betsy Nye (12).

Nye works as a waitress and is the mom of a 9-year-old daughter. She and I met by chance a couple of months ago, when our paths crossed on a trail run, and after talking for a while, she asked me to be one of her pacers at this year’s Hardrock. I did the following interview to get to know her better and learn from her.

1. What’s one of the most difficult or dangerous situations you’ve faced during Hardrock, and how did you troubleshoot it?
In 2011, when the course was counterclockwise and we left Grouse heading to Ouray, it was raining really hard, like flash floods, in the box canyon above town. It was a big snow year, and the creeks that are normally little creeks were huge rivers above my waist. I got to one and it was muddy, you couldn’t see the bottom, and it was at night. I waited for other runners so we could cross the river together. It was one of those situations where if you fall, you’re gone. It was a challenge.

2. You’ve finished the Hardrock 100 12 times and the Wasatch Front 100 Mile Endurance Run, in Utah, 10 times. They cover different Rocky Mountain ranges. Are they very similar or different, and which is harder?
They’re both mountain runs, but it’s a tossup which is harder because any 100 is tough. They’re both hard in different ways. In Hardrock, they give you a lot of time to finish it [48 hours], and you hike a lot. Wasatch [which has a 36-hour limit] is runnable, so it can be harder because to do well you have to really push it. Hardrock is my favorite because I just love the San Juans, the race director is amazing … and I love the community—everyone says it’s like a tribe. It holds a special place in my heart.

3. Each year the Hardrock course changes direction, and this year it will run clockwise. Do you prefer covering the route clockwise or counter-clockwise?
I actually feel better counter-clockwise because then I go over Handies Peak sooner [at mile 36] and during the day. When it’s clockwise, going over Handies [14,048 feet at Mile 64] is tough for me—it always has been, because of the altitude, and it’s nighttime, and you’ve already done so much during the day.

4. Do you use special gear or clothing for Hardrock?
I typically don’t run with poles, but after I broke my leg [in 2012], I used poles for Hardrock, but just for certain parts. They help keep your balance. For hydration, I use a pack because it’s nice to have your hands free, but in the old days I just had water bottles. For clothing, I don’t like being cold, so I normally have a long-sleeve shirt, gloves, a hat, and you want a good rain jacket. Since it’s at 13,000 feet, it can snow on you any time. Last year we got hailed on, and it was painful.

5. What’s your advice for someone training for an ultra with extreme altitude and terrain if they cannot mimic the altitude or terrain during training?
In order to acclimate properly, they say you need a month [of being at the high-altitude destination], but not everyone has that time, and altitude sickness can happen to people in the best of shape.  … There’s something to be said for just showing up and running. I also try to run through creeks—you definitely want to get used to running with wet feet.

6. What are your favorite foods to eat along the Hardrock course and at aid stations?
GU, turkey avocado sliders, miso soup, beef jerky, potato, pasta and watermelon.

7. What other mountain ultras do you hope to run someday?
Ronda dels Cims and Tor des Géants, but they’re both expensive and in Europe. [What about the Ultra Trail du Mont Blanc?] UTMB, not as much. I did Western States once, and I prefer lower-key runs that are not as popular and with not as much hoopla. I’ve always been a backpacker-hiker kind of girl, so the more hiking, the better.

Here’s What We Loved about Trail Running in 2022