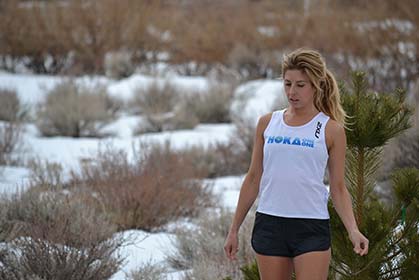 On April 4, at the American River 50 Mile Endurance Run in Folsom, California, Jen Benna finished first female and tenth overall in a competitive field, with a time of 7:23:52.

For Benna, 35, of Reno, Nevada, the win represents the end of a nearly year-and-a-half break from competitive trail running. In 2013, Benna placed first at the Zion 100 Miler, first at the Bandera 50K and second at the Tahoe Rim Trail 50K. Later that fall, after becoming pregnant, she began what she describes as “an extended taper that went on forever.” She continued to run through her pregnancy, but could not race.

Benna, who also has a 4-year-old daughter and maintains a full-time job in pharmaceutical sales alongside her running career, was not used to taking time off for any reason. Once her baby was born, in September, 2014, Benna was eager to get back to the trails—even a bit too eager. In December, 11 weeks after giving birth, she hurried into the California International Marathon, and learned the hard way that she had pushed her body too far, barely managing to cross the finish line. Not yet fully recovered from giving birth, she suffered from stomach upset, and hip and pelvis pain.

The prescription: three more weeks of rest. In January, she began training again. Then her 4-year-old fell ill, seemingly with bronchitis. It wouldn’t go away.

“At first they thought it was the beginnings of pediatric asthma,” Benna says. “A few weeks ago, they realized it was actually pneumonia. It’s been a rough winter.”

With frequent and unexpected emergency-room visits, Benna missed almost every race she had signed up for over the past few months, and her hopes to qualify for the Western States Endurance Run were dashed.

Now, with her daughter’s (and her own) health on the mend and her sights set back on the trail, Benna took some time out of her busy schedule to talk about her return to racing and how she balances work, running and parenting.

1. How did you feel going into American River 50?

I felt flat, both emotionally and physically, because I had been in the hospital with my daughter for the past two weeks, not running.

In general, I like mountainous, technical running the most. The first half of the course is flatter than what I am used to, but the second half, which is mostly hillier singletrack, played into my skill set. I just ran my own race and didn’t start pushing until the halfway mark.

2. How did you get into running?

I was always athletic growing up, and my husband and I were recreational runners through the early years of our marriage. My husband was a long-distance hiker and we started hanging around like-minded people. The mindset of pushing yourself to your limits was attractive to me.

In 2003, my husband signed up for the Over the Hill Track Club Ridge Crest 50K-30K. I was there to spectate, and I met [accomplished trail runner] Krissy Moehl. I told her about my interest in running ultras, and she encouraged me to sign up. I had never run more than six miles, but she insisted that I should just go do it. I was wearing cotton shorts, and I think I had a Walkman with me, and I wound up winning my age group for the 30K. It was such a satisfying experience.

3. In addition to being a competitive trail runner, you are a mother and have a full-time job. How do you balance all three aspects of your life?

I work 40-60 hours a week in biotechnology and pharmaceutical sales. I have to fit my training around my job and my family. I could be running 100 miles or more per week, but I know I don’t have time for that. Instead, I work with my coach [Jason Koop] on high-intensity, focused training. My long runs don’t look that long—three or three and a half hours—but the intensity is grueling.

Also, [my husband] JB supports me in every piece of what I do. He understands how important running and competing is to me. We work as a team: he fills in for me when I’m not there, and I fill in for him when he’s not there. It’s a lot of full-time juggling. We are absolutely ruthless with our time.

That being said, our kids are our number-one priority. When they get sick, we drop everything. You can’t predict what is going to happen with your kids, and you have to be willing to make sacrifices at any cost. 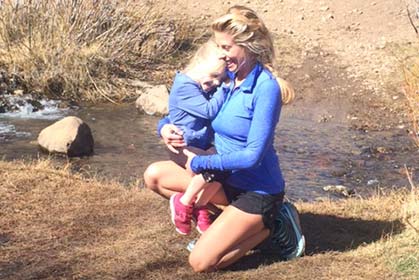 Benna with her daughter Eva. Courtesy of JB Benna

4. What lessons have you learned from balancing motherhood and pregnancy with your running career?

I have struggled with patience my whole life. Some women have a lot of success running soon after they give birth. I have a friend who ran a marathon seven weeks after having her baby. But I’ve learned that just because someone else is doing it doesn’t mean that it is the right fit for me. I learned to be patient and let the body do what it’s going to do. You can get to the level you want, you just have to be patient.

Having gone through some serious health issues with kids, I’ve come back to the understanding that at the end of the day, running is just running. To be out on trails, competing, is a pleasure and joy in my life. I have to remember to just have fun with it, because when you see your kids so sick, you realize that the little things matter. As serious as I am about competing, I also want to smile and laugh during a race. It is a celebration of life.

5. What advice do you have for mothers who are, or want to be runners?

Mothers are great examples to their kids of what can be done in life. There aren’t many reasons why you can’t do whatever it is you are passionate about. Family and kids have to always be number one, but there is a lot of room in the day. You don’t have to be training 100 miles a week to be competitive.

6. Now that you are back to training and racing, what are some of your goals?

I think I have stunted my own success by poor race selection. I’ve always just shot from the hip with race selection, and never really edited myself in terms of building in enough time for recovery. Koop forces me to pump the breaks and focus on races that are a good fit for me. For now, I’m enjoying going after my own PRs.

In terms of races, I have my sights set on Western States and the Ultra-Trail du Mont Blanc

7. Will you encourage your own kids to run when they are old enough?

I can certainly see how this sort of lifestyle is very all-encompassing for kids. My daughter will take bites of dinner and call it an aid-station! They travel to races with me and they know that I run a lot on the weekends, and it rubs off and becomes appealing. I don’t know if running 100 miles is really good for anybody, but we do it anyway because we love it. I am certainly not going to force them to do anything, and as they get older I will have to assess what is best for them.