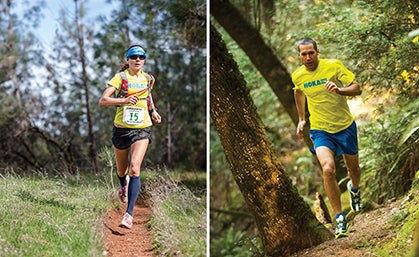 We’re looking forward to hanging out with HOKA athletes Dave Mackey and Magdalena Boulet later this month at our second annual Trail Runner Photo Camp in the red-rock country outside of Moab, Utah.

We recently caught up with Magdalena and Dave on how they find balance in their busy lives. 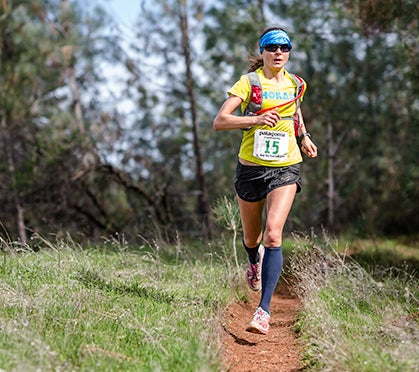 Former Olympic marathoner, Magdalena Boulet, with an impressive marathon PR of 2:26:22, has been running competitively since 1997. “At first I just went out for the team because my friend was on the team,” says Boulet. “Then I found out that if I ran well enough, it could pay for college. Even after college, I wasn’t really focused on making a career out of running, I just wanted to keep training and competing.”

Since then, Boulet has competed in distances from 8K to 50 miles. Earlier this year, she won the Way Too Cool 50K, and also boasted a 2:33:13 finish at the Boston Marathon. She also has an 8-year-old son and works full time as VP of Innovation, Research and Development at GU Energy Labs.

1. You’ve raced a variety of distances. Have you always been interested in trying different distances?
I think I just enjoy racing, and I also enjoy trying new things. That’s what keeps training interesting to me.

There are plenty of women out there who could excel at multiple distances, but they don’t try them. Either they enjoy what they’re doing, or prefer to stay within their comfort zone. I’m also an extremely competitive person, so I don’t really care what distance or surface I’m running, I’m going to give it my best shot no matter what.

2. What’s your training schedule like?
My typical training week these days with a full-time job consists of 80-100 miles per week mostly on single runs. I do treadmill hill repeats once a week (I call this workout a Jack Daniels Special), I do one long run a week of 20-30 miles depending on what I am gearing up for and I do one threshold workout or “three-headed monster” workout where I combine threshold, 5K and mile effort all into one workout. The rest of the days, I run easy miles on my favorite trails with friends. When my body tells me that I need a rest day, I take it. Occasionally I jump into a swimming pool and on the ElliptiGO.

3. Have you struggled with injuries and, if so, how have you dealt with them?
I’ve probably been injured just as often as I’ve been totally healthy over the last 15 years. I’ve had a few stress fractures, and a lot of trouble with my feet; I’ve battled a plantar problem for most of the last 10 years. But, I’ve been lucky in that most of the injuries I’ve had have been minor enough that I can keep training to some extent, or not be out of training for too long (except the stress fractures, of course). My husband has gotten pretty good at foot massage and that has helped a great deal.

4. You’ve worked with coach Jack Daniels in the past. How has having a coach has benefited your running?
Jack has been my coach and mentor for over 13 years now. He is a wealth of knowledge and experience and my consistency and longevity in the sports is a result of my coaching relationship with him. I often wonder how different my running career would have been if our paths never crossed. Scary to even think about it.

5. How do you maintain balance between running and family life?
It helps that my husband was also a professional runner, and he understands just how much training and racing means to me. We make a lot of races into family trips. We were in Boston the whole week before the race because my son was on spring break, and he got to see a lot of historical sites that he’ll learn about in school. But mostly, it just means making time to get the training in before work or during my lunch break. GU Energy Labs is extremely supportive of my passion for running and competing, as it deeply defines the understanding and connection for the athletic community I work with.

Read on for our Q&A with Dave Mackey … 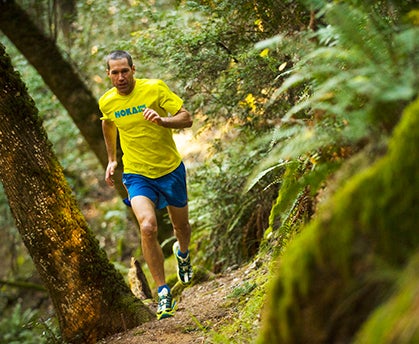 Ultrarunner Dave Mackey knows a thing or two about the trails. Beginning with the Mosquito Half Marathon in 1994 and the Breckenridge Crest Marathon a year later, Mackey’s race resume includes wins at many classic races including JFK 50, Way Too Cool 50K, Miwok 100K and American River 50M.

In 2011, he was named Ultrarunning Magazine’s Ultrarunner of the Year. In the last year, he won California’s prestigious Quad Dipsea (28.4 miles), beating his nearest competitor by nearly half an hour, and has posted top-10 finishes at the North Face Endurance Challenge San Francisco 50M, Pikes Peak Marathon and Lake Sonoma 50M.

1. When did you first start running?
I guess that’d be in high school. I played soccer, then ran track my senior year of high school. In college I ran on the trails through the woods in Durham, New Hampshire, to stay in shape for soccer and that was my first dig at real trail running.

2. Did you ever dream that you would make running your career?
I have never made it a career and never will, but it is a serious hobby and I love doing it every day if I can. Most career runners actually spend more time recovering or relaxing or traveling, or writing and maintaining sponsorships than actually running, which is great. I just take all the other stuff outside of running itself and have a job and family like anyone else.

3. What’s your training schedule look like?
I have an ultra at the end of June in the Dolomites, the Lavaredo Trail 120K race, which should be incredible. I’ll ramp up a bit in two weeks but just do quality runs and no mega miles, which is more or less par for the course anyway. I’ll run 60-70 miles per week in mid May until end of June, but all with vertical. 70 to 80 miles per week, all hills, is what I run typically.

4. How do you deal with injuries?
I’ve been so lucky about this. I really don’t know why, but I do know that my HOKA One One footwear is a serious anti-injury prophylactic. Not just being the corporate shill here because I honestly believe the shoes make my recovery and injury resistance so much easier. I am so happy the trail-shoe industry is doing what HOKA has done with softer, bigger midsoles because so many more runners are injured less. It seems all my friends who are hurt or have stress fractures are those who still run in non-cushioned shoes. I think moderate mileage and sticking to running on dirt has helped. The last time I was really hurt was when I popped my ankle running through talus six years ago in the Flatirons. Luckily, that was short lived.

5. How do you maintain balance between running and family life?
I owe it all to my wife. Hands down.