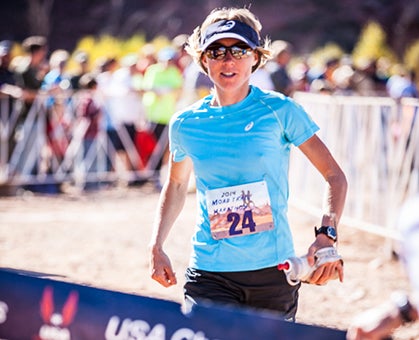 Kimmel, who lives and trains in Silverton, Colorado, qualified for the USA Mountain Running Team in 2008 and 2009, won the 2009 Pikes Peak Ascent and is a six-time winner of the La Sportiva Mountain Cup. When she’s not training in the mountains around Silverton, she spends her time skiing, working on home improvements and running Silverton’s Mobius Cafe.

Here, Kimmel speaks to Trail Runner about the Trail Marathon Championships, mixing up racing distances and how trail marathons are different from road marathons.

There are several trail and ultra events that bear the title  “championship,” as well as established ultras like Leadville and Western States that regularly draw top fields.  Did the USA Trail Marathon Championships feel like a true championship to you?

Without a doubt, the USATF [USA Track & Field] Championships always bring out very talented runners, both trail and road runners, and, just like other races, sometimes the field is more stacked than others. In my mind, this particular course in Moab is a supreme championship, because it is a quintessential trail run. It takes a trail runner to win (regardless of whether they would consider themselves one or not). It has everything from road to singletrack, and it’s technical but not relentlessly so. It has ascent, descent and also rolling and flat terrain. It is at relatively low elevation and, being in the desert in November, is very temperate and dry.

How did you train for the Trail Marathon Championship race?

My training for the Trail Marathon Championships this year was actually about not letting any part of it be a stress in my life. This race came at the end of a long racing season, which started in February, and also after wrapping up a demanding summer job. So it was important to be kind to myself and simply go out to do the best I could with the training that I managed to get in through the summer.

You’ve run distances as short as 10K and as long as 50 miles. What unique challenges do marathon-distance trail races pose?

One of my favorite things about running right now is racing a variety of distances. The unique challenge of the marathon-distance trail run is mostly having the stamina for not only the distance covered but for the challenges of the different terrain that you encounter. Beyond that, like a road race, it takes the foresight to set a slower pace than one would run for a shorter-distance race.

How does strategy and training differ in a road marathon vs. a trail marathon?

I ran one road marathon about 12 years ago, and I’m thinking more and more about doing another one in the future. So the difference in training for roads versus trails is something I spend a lot of time thinking about. The biggest difference for me is that my training load for trail running is based more on time than on distance. My training is also tailored to the terrain of the race, rather than simply being about building up an endurance and speed base.

In a road marathon, 3:27:52 would be an impressive amateur time, but pretty mediocre for a pro. In Moab, that time won you the Trail Marathon Championships and was just shy of a course record. What draws you to running trail marathons that force you to slow down, rather than trying to be as fast as  possible on the roads?

It’s a common mistake for people to think trail times are slow. Then they go and run [a trail race] and they get slaughtered.

Trail running is about more than how fast can I go—it is about being somewhere beautiful, experiencing something different and breathing fresh air. For me, that is well worth slowing down for.