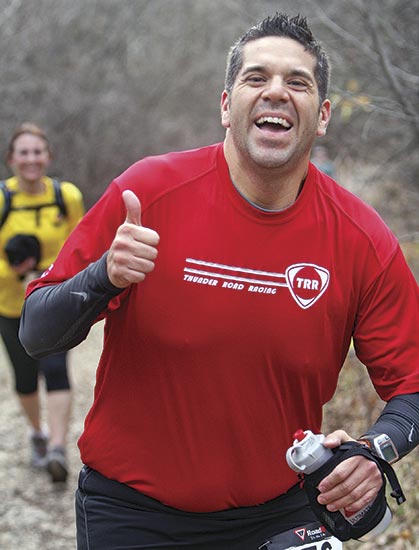 When he stepped on his doctor’s scale in 2002, Chris Thomas’s eyes grew wide at the number staring back at him. The readout had to be wrong, he thought. He knew he’d gained weight, but this … this was bad.

For a guy who relishes telling tall tales, cracking self-deprecating jokes, will grow a Fu Manchu moustache to get a chuckle and always wears an ear-to-ear grin like it’s his Sunday best, this was no laughing matter.

Weight wasn’t always a problem for Thomas, now 41. When he graduated from Council Grove High School in Kansas in 1990, he was a strong, agile 18-year-old. The diet he grew up on—hamburgers, steaks, potatoes and other starchy foods—was typical for central Kansas kids, and it fueled his performance on the football field and wrestling mat.

But when his playing days ended, he stopped exercising and found a new social scene that revolved around food: sports bars, cold beer, nice dinners with his future wife, Jaime, and calorie-laden desserts.

By age 30 he’d more than doubled in size and was on cholesterol and blood-pressure medications. Obesity made him depressed, and he masked it with humor.

“You would see the same happy guy on the outside,” says Jaime. “I didn’t even know the struggles he was going through internally.”

Thomas worked to take the pounds off. He spent 18 months on the Atkins diet and trimmed to 325 in time for his and Jaime’s wedding in 2004. He set his sights on returning to his high-school physique, but quickly reached a plateau.

A turning point came in 2007 when he took a new job selling financial-compliance software in Lincoln, Nebraska. His new health-insurance plan covered a weight-loss surgery called laparoscopic adjustable gastric banding, where an inflatable band is placed around the stomach to limit the amount of food it can hold. But partway through mandatory pre-surgery counseling, Thomas realized he wanted to find a different solution.

Instead of moving forward with the surgery, Thomas developed a gym routine with his buddies and replaced the staples of his diet—carbs and sweets—with fresh veggies and meats. By late 2009 when he and Jaime moved to Kansas City, he was down to 290 pounds.

During a visit home for his high school reunion in June 2010, he decided on a whim to walk a community race, the Run Shunga 5K.

“It took about 43 minutes, but I pushed through,” he says. “I probably hadn’t done three miles since I was a kid. I remember calling Jaime and saying, ‘Guess what I did? I just ran a 5K!’”

Within four months, Thomas trained for and ran two half marathons with two buddies, Scott Lee and Brad Fanning. He dropped 25 more pounds during that span. Next, he and Lee signed up for a 10-mile trail race in February 2011 in Kansas City, Kansas.

Five inches of fresh snow blanketed the course, welcoming them to trail running in gnarly fashion. They slipped and slid their way through a quad-burning, ankle-twisting mixture of hilly bridle and singletrack trails, gaining nearly 2,000 feet of vertical in the process and finishing in 2:22.

Thomas finished the race with tired muscles and achy knees as temporary souvenirs, as well as a more permanent one—a photo of him trotting through the snow, grinning and giving a thumbs-up. It’s a sign that has since become his trademark in race photos.

“He has an infectious smile, and he’s so upbeat,” says Sherrie Klover, a training partner. “You just can’t have a dull run when you’re with Chris. He’s so funny that you always feel better when you’re around him.”

In October 2011—less than a year after running his first half marathon—Thomas toed the starting line of the Heartland 50-miler in Cassoday, Kansas, at a trim 225 pounds and finished in 12:38:02.

After Heartland, Thomas converted to running almost exclusively trails on the weekends. He found the softer surface much easier on his body than pavement. The support of local runners from the Lawrence Trail Hawks and Kansas City Trail Nerds gave him a boost as well.

“The camaraderie on the trails is really cool,” he says. “Most days, you’ll recognize a car at the trailhead and have someone to run with.”

He’s garnered a following, too. He speaks to local running clubs and church groups, and candidly documents his adventures at thunderroadracing.org—which includes intimate details from the 2012 Brooks Falls 50K in an aptly titled blog entry, “Poopin’ in Eucalyptus.”

“He never ceases to amaze me with the funny things he comes up with!” says pal Debbie Lantz. “Some people are just born with that quick wit, and he definitely makes the miles on the trail go quickly.”

Thanks to listener demand, Thomas also became a two-time guest on UltraRunnerPodcast, where he stirred runners with his personal weight-loss story, confessed to being a food addict and shared heartbreaking details of the emotional toll caused by dirty looks when he squeezed onto airplanes during business trips.

“He’s been the fat kid who’s worried about what other people think of him,” says Jaime, “and now he is achieving extraordinary things. He is becoming empowered.”

“I was pretty hopeless for a while wondering how I would get out of this cycle,” says Thomas. “I’m mentally stronger now, because I know I can get through this.”