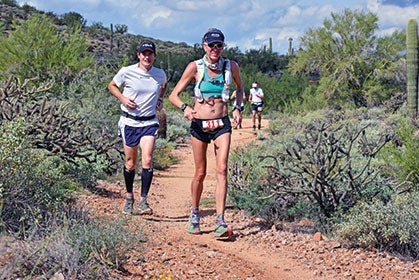 On August 25, 2014, Jenn Thompson woke her kids, fed them breakfast and drove them to school. A few days earlier she had been laid off from her job as a hospice nurse, losing her health insurance and only source of income as a 40-year-old single parent. Eager for some trail therapy, she headed for the Coalton Loop, a 15-mile jaunt in the foothills outside Boulder, Colorado.

Ten miles in, she moved over to let a cyclist pass. The cyclist veered to the side as well, so Thompson started moving forward.

“Snake!” the cyclist screamed. Thompson felt something leathery slap against her shin, and then instant, searing pain. She screamed, and before she could look down to see that she had been bitten, her face felt numb.

Thompson is small—single-digit body fat—and her heart was slamming at around 130 beats per minute. The bite hit a vein, sending venom directly into her bloodstream. Her vision started to cloud. Her muscles cramped. She started projectile vomiting.

The cyclist would not come near Thompson for fear that the rattlesnake would return, but the cyclist’s friend arrived just seconds after the bite, called 911 and knelt by Thompson to wait. Thompson told her her children’s names so someone could pick them up from school, and called her parents to say goodbye.

As the crow flies, she was only two miles from the trailhead, but the route, over windy, rocky 4×4 roads, was much longer. Twenty-seven minutes elapsed between the 911 call and her evacuation.

“I’m dying, you have to do something,” she recalls pleading after she arrived at the emergency room of Boulder Community Hospital, between bouts of unconsciousness.

Doctors administered 26 doses of anti-venom over several days before Thompson’s organs began to resume normal function. Still, her entire body was swollen and bleeding internally. Her left leg alone had grown almost 10 pounds and was so painful that she vomited at the slightest touch.

Even so, on her second day in the intensive-care unit, she told one of her physicians, “I want to run the Javelina Jundred 100K. It’s on November 1. Can I do it?”

The daughter of an Army man, Thompson moved frequently as a child. By middle school she had developed an unhealthy fear of death and dying, which she attributes to constant apprehension over her father’s well-being in the field. Sometimes, she slept on the floor under her sister’s bed, afraid of imaginary skeletons that emerged from a German wall clock to operate on her.

In part to face these fears, she chose to study medicine in college, and, in 1996, became a nurse. “That was my therapy: taking care of people who couldn’t take care of themselves,” she says. “You can’t sit and fuss over whether you are dying when the people around you are desperately ill.”

She settled in Virginia with her husband, also in the Army; they had married in 1994. Their first son was born in 1999 and their second in 2002.

In 2004, doctors found a mass on one of her lungs, and presumed it to be cancerous. Test after test came back inconclusive. Thompson, pregnant with her third child, vowed that if she survived, she would run a marathon. A half-pack-a-day smoker for 10 years before she had her first child, she had never been athletic, nor led a particularly healthy lifestyle, and knew she needed a change.

The mass turned out to be an infection, not cancer, and Thompson upheld her vow. In January 2005, she ran her first 5K. In March she ran a 10K. That October, she finished the Marine Corps Marathon. The process had not been fun: “I was just going through the motions,” she recalls, “not really enjoying it at all. But after that first marathon, I immediately became addicted to the idea of suffering.”

Motivated to beat the pain, she ran the Marine Corps Marathon again the following year, and soon developed a semblance of a training routine.

In 2010, Thompson’s marriage fell apart, and she turned to running to cope. “I needed something that was mine to own and feel proud of,” she says. “That’s when I started to train my ass off.” That June, she ran the Charlottesville Marathon in 4:17, breaking her personal record by over an hour.

Not long after, her 29-year-old brother died of an undiagnosed heart condition. “Hardships offer two choices,” Thompson says. “They are either going to destroy you, or give you another reason to do better.” Again choosing running over despair, Thompson, who had moved to Phoenix in the interim, ran the Tucson Marathon in 3:20.

In 2012, a friend enticed Thompson to run the Javelina Night Run 50K, her first trail race. She placed in the top 10, and was hooked. The following year, she filled her race calendar with trail events, returning to Javelina for the 100-mile distance. In 2014, she set her sights on an entry to the Western States Endurance Run. More importantly, she planned to return, again, to Javelina and the familiar Arizona desert that housed it—the race had become a sort of homecoming.

Nine weeks after the bite, Thompson ran Javelina. She had only been walking for four weeks, and hadn’t gone longer than a few hours without pain meds. She was still on a liquid-only diet, the muscles in her left leg were severely compromised and trailside bushes and errant mountain bikers could trigger panic attacks. But she knew she had to run.

“I needed to do it for my head,” she says. “Near-death experiences rattle your cage, and I was afraid that if I didn’t confront my pain and fear immediately, I would never go back to trail running.”

“Jenn is driven and slightly hardheaded, but in a good way,” says Thompson’s running partner John Shultz, 44, of Scottsdale, Arizona. “Go ahead and tell her she can’t do something, then watch her succeed with a smile.”

With the help of several medical pacers, including Shultz, she crossed the finish line in 15:27 as 10th female.

Nearly a year after the bite, Thompson still suffers from PTSD, painful muscle contractions and dietary complications from esophagus damage. Yet she continues to race, calling her children her biggest support crew.

“Life starts on the other side of the line,” she says. “You never know your potential unless you step across and draw a new one.”